Justin Ashley: 'It was one of the most difficult decisions I ever had to make'

The toll of a hot Sunday at Pomona overwhelmed Justin Ashley, who ultimately had to be removed from his car on the starting line and was unable to contest the Top Fuel final, suffering from heat exhaustion. Ashley explains what happened before and after the tough decision.
03 Aug 2021
Phil Burgess, NHRA National Dragster Editor
Feature

Suited up for his final-round Top Fuel battle at the Lucas Oil NHRA Winternationals presented by ProtectTheHarvest.com, Justin Ashley should have been his normally laser-focused self, ready to drill the Christmas Tree and hopefully race to a second career title.

As we all know now, that didn’t happen, as the toll of a hot day in Pomona overwhelmed the talented second-generation driver, who ultimately had to be removed from his car on the starting line, suffering from heat exhaustion. As Ashley was hustled to his air-conditioned pit vehicle, still wobbly and woozy, Leah Pruett singled for the Winternationals trophy.

“Unfortunately, it was a decision that had to be made, for my safety and Leah’s safety, but it was definitely one of the most difficult decisions I ever had to make,” Ashley acknowledged. “I was dizzy and nauseous and genuinely just weak. With the support of my father and [crew chief] Mike Green and [car owner] Dustin Davis and the team, we all decided that it was in the best interest of everyone. As much as it hurt at the time, I had no choice but to get out of the car. I was just weak, and it would have been really, really dangerous.

“But Mike Green put it best; he said, ‘Listen, you have a long future ahead of you. If you're not up to it, do not make this mistake.’ You know, safety first, and the team backed that decision.”

For Ashley and the Smart Sanitizer Top Fuel, the Winternationals seemed like it was going to be that get-well event the team needed, getting back to the final round for the first time since their breakthrough win last summer and their first semifinal since the 2021 season opener in Gainesville. 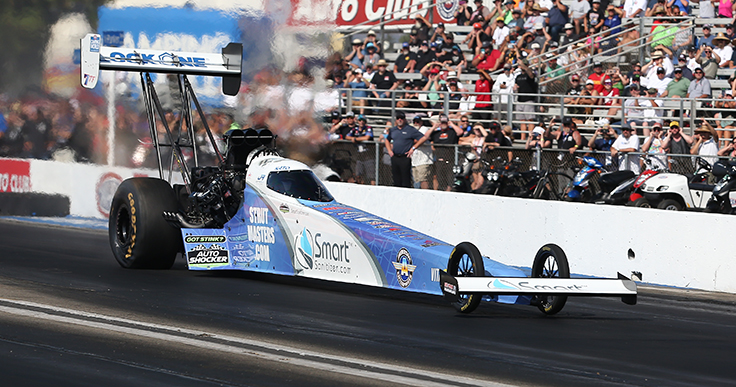 “I was feeling fine all day and then just between the semifinals and the finals, all of a sudden, I just started to not feel well,” he explained. “My head started hurting, I started to get dizzy, and just didn't feel right. I started to feel weak. So, I spent some time in the lounge and started downing as much water, Gatorade, and food as I could, thinking that that would help. But at that point, it was just too far gone.

“I had spent the day drinking plenty of fluids, but I really didn't give my body the right food or nutrition that it needed. I was just caught up in mixing the fuel and racing the car, just spending a lot of time outside and just didn't feed my body, and it eventually caught up to me.” 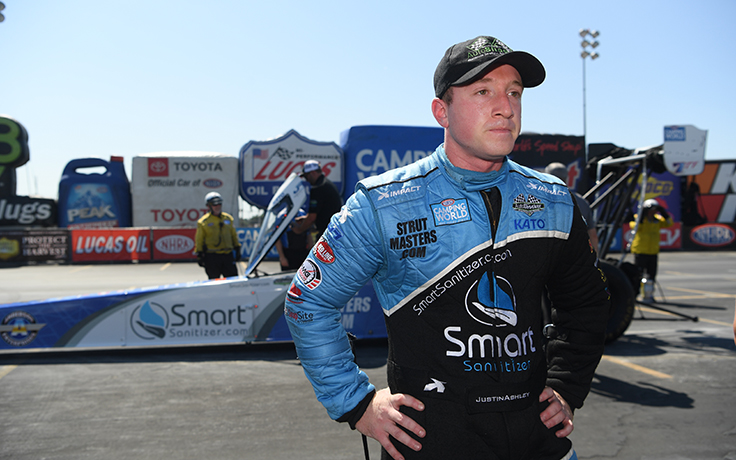 The ultra-competitive Ashley was determined to soldier on and get his team the much-needed win, so he suited up and headed for the staging lanes.

“I got in the car in the staging lanes, and then I had to get out again because I was sick to my stomach,” he said. “I went over to the side and threw up twice. And then I got back in the car, rolled up to the burnout box, and just was not all cognitively and physically there.

“I'm very grateful for [NHRA Medical Director] Dr. Surface and the entire medical staff because without them I don't know what would have happened. I went back to the trailer and felt OK because my adrenaline was still going. But once the adrenaline stopped, everything just hit me all at once. They had to hit me with an IV, and I ended up throwing up 10 to 12 times.

"Mike Green had a great handle on the car the whole day, and the team was amazing. During quick turnaround, they did an unbelievable job. It still pains me to not give my team that opportunity that they deserve to win because they deserved an opportunity to be able to race Leah there. 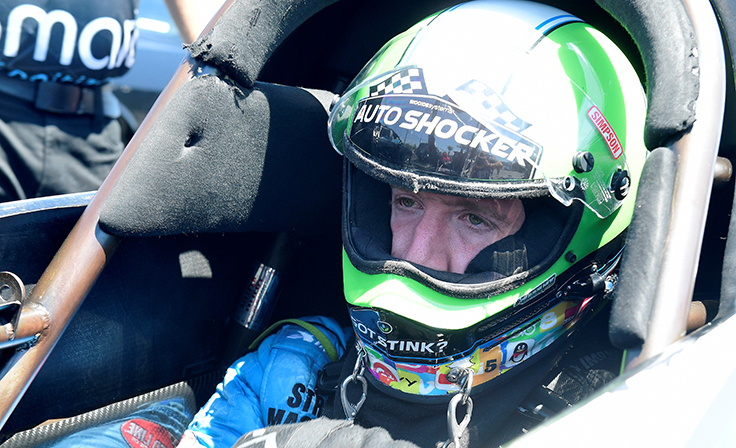 “I take full responsibility for what happened. I had good intentions because I was so focused on what I was doing, but I forgot to take care of myself physically, and unfortunately, that's what happened. But the good news is: Lesson learned. I have a nutrition plan moving forward to make sure that something like that doesn't happen again.

“I also want to acknowledge the overwhelming support that I got from other drivers, who were just unbelievably supportive; people like Antron Brown, Leah, Tony Stewart, Tim Wilkerson, Mike Salinas, and Brian Corradi all came over to check on me to make sure I was OK, which was just really, really cool.

“I don't even know at the time, but Tony Stewart left the staging lanes and went back to his hospitality area and brought a bag of ice to our Suburban to make sure that I was in the position to be able to race; unfortunately, it was too late, but it was cool that he cared so much. 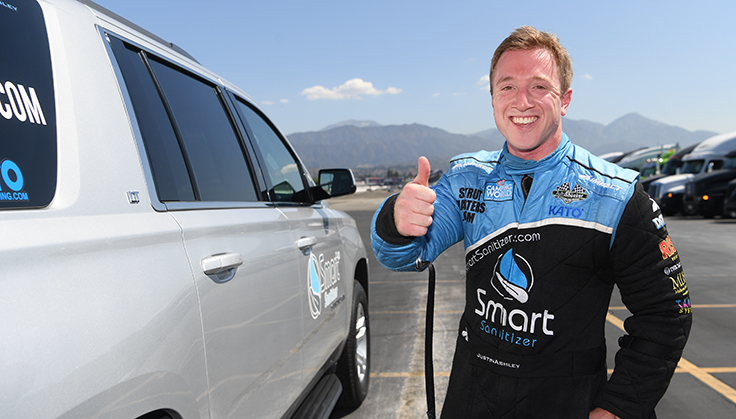 “Even though we couldn’t win the race, we’re very happy with the way the car performed. We were able to make it down in the semifinals, and we were consistent, and we picked up some much-needed points. As far as I'm concerned, we leave there feeling good about the position that we were in because we gave ourselves a good opportunity to win the race. Leah deserved to win that race; they did a great job, too.”

Ashley believes he'll be fine to race at the next event, the Menards NHRA Nationals Presented By PetArmor in Topeka in two weeks, and solidify his team’s spot in the Countdown to the Championship.