From Norway to California to Indiana, Julie Nataas has taken the long road to pursue her dreams of winning a Top Alcohol Dragster title and ultimately racing as an NHRA pro. So far, she's right on schedule.
13 Apr 2021
Kevin McKenna, NHRA National Dragster Senior Editor
Feature

How far are you willing to go to pursue your dreams?

For Julie Nataas, there's almost no sacrifice too great when it comes to achieving her goals, which in the short term includes a Top Alcohol Dragster championship, followed by what she hopes is a career in Top Fuel. Six years ago, Nataas left her home in Norway for a new life in the United States. She first landed in Southern California as a student at Antioch University Santa Barbara and more recently relocated to the drag racing hub of Brownsburg, Ind., to further her career aspirations. So far, her career is right on schedule, and she’s got zero regrets. 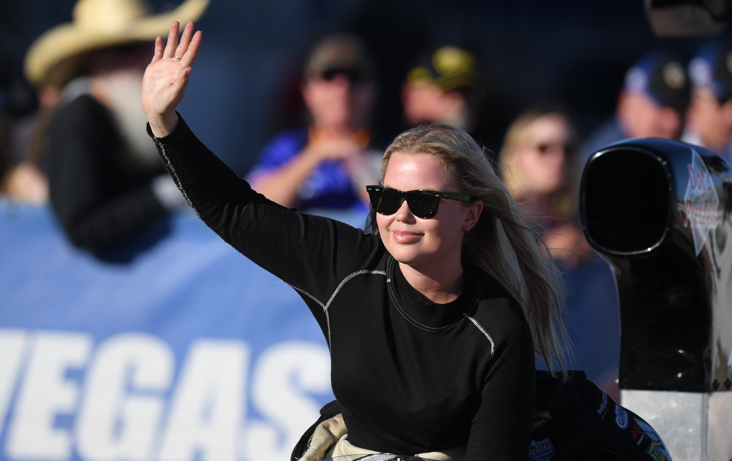 “There is definitely a little culture shock, and of course I miss my family, but this is what I want to do; I want to race and make a career out of this,” said Nataas. “That’s why I chose to come to Indy; as a full-time racer, this makes more sense to me. I gave up the beach in California, but we run the North Central Region with our alcohol car, and this makes it easier to get to all of the races. Besides, I graduated college in 2018, so there was really no reason for me to stay out there. Fortunately, I know a lot of people here [in Indy], and that has made the move a lot easier, especially since I’m not currently able to see my family due to COVID. Here, you’re surrounded by racers, and they all understand the racing life. It’s a good environment. Oh, and besides my family, the one thing I do miss about Norway is the candy.”

Settling in her new place in Brownsburg, Nataas typically hits the gym at 5:30 a.m. each morning and also works for her father’s company in Norway. With a six-hour time difference, she can make early-morning calls to Europe while they are in the middle of their workday. The rest of the time, she’s busy putting her college degree to good use, forging ahead with her marketing plans, and chasing potential sponsors.

Is this the year Nataas wins the Top Alcohol Dragster championship? She certainly thinks it’s a reachable goal, and after a pair of Top 5 finishes the last two seasons, there is plenty of reason for optimism. It’s worth noting that the NHRA Lucas Oil Drag Racing Series Top Alcohol Dragster championship trophy has resided with Randy Meyer Racing for the last two seasons, and there is a good chance that won’t change this year. Megan Meyer won back-to-back titles in 2019-20, but she won’t win a third after announcing her retirement from active driving. That means the door is wide open for Nataas, and her current teammate, Rachel Meyer, who took over for her older sister this season.

“I hope we can win the championship this season. We’re definitely going for it, but so is Rachel,” said Nataas. “It won’t be easy. There’s a lot of great cars out there right now. I feel like we’ve got a good chance; as good as anyone.”

Nataas is confident but admits she didn’t’ always have that level of sureness. Since her NHRA debut in 2017, she’s matured as a person and a driver, and she’s learned how to identify and eliminate distractions. That level of focus allowed her to win the 2019 Charlotte Four-Wide Nationals and then win the Amalie Motor Oil NHRA Gatornationals last season. She also won the regional event in Bowling Green, Ky., last year in what ultimately became a third-place finish. Nataas finished the season just 11 points behind runner-up Shawn Cowie and 63 points behind teammate Meyer.

“Before I came here and started racing in Top Alcohol Dragster, I was racing a Super Comp car in Europe, and we only raced in the summer, so I never got that consistency of making a lot of runs in a race car. I’ve learned so much since my first year in Top Alcohol Dragster. I feel like I know what to do and what not to do. If I get distracted before a run, I can gain my focus again. Before, that was definitely something I didn’t have control over. Before, I didn’t even realize that [focus] was a thing. Before, it was just fun and games, and now we’re racing on a more professional level. I’ve learned a lot about the things that affect me, and how to deal with them. I believe it’s all a part of what happens when you make more and more runs.”

So far in 2021, Nataas is off to a flying start. At the Baby Gators, the first Lucas Oil Series regional event for alcohol cars, she drove her OTG/Right Trailers dragster to the victory over Duane Shields. She was on pace for a similar result the following weekend at the Gatornationals but lost a tough race against her teammate, Meyer, in the quarterfinals.

“Really, this year couldn’t have started any better," Nataas said. “Our team spent so many hours at our shop working on my car and Rachel’s car. It was great to come out of Florida with two wins. We knew going in that we had a good chance, but there are no easy runs in this class. Everyone is so good you have to be on top of your game.”

The next stop for the Meyer team will be Las Vegas, where alcohol cars will race four-wide for the first time. Nataas sees the unique format as a new challenge, and she’s more than eager to try something different. After that, she’ll race in all of the North Central Region events and 10 or 11 national events to fill out her scorecard for the season.

“I was not aware that we were racing four-wide until a little while ago,” she said. “I’ve never done it before, but I have an open mind, and we’ll see how it goes. That goes back to the whole thing about being able to block out distractions at the starting line. The good news is this is new for all of us, so I don’t think anyone will go there with a huge advantage.”

When the subject turns to Top Fuel, Nataas is quick to admit that’s her ultimate goal. She wants to follow her father, Thomas, who had a long and successful nitro career in Europe, including the 2013 FIA European Drag Racing Series title. She has a definite path to get there but isn’t in a hurry to do so. Celebrating her 25th birthday last month, Nataas has plenty of time to fulfill her ambitions. 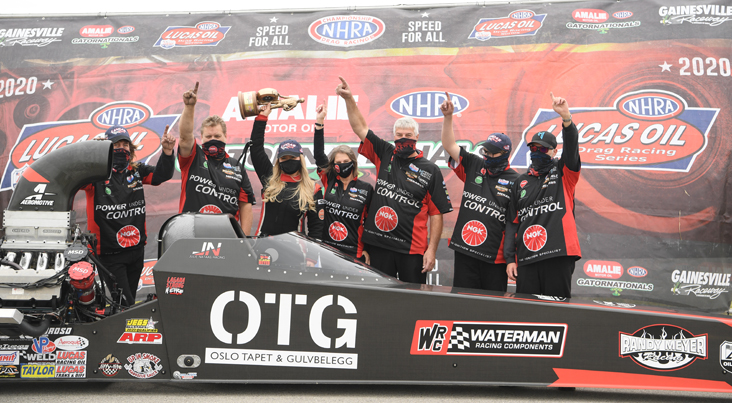 “I definitely want to race Top Fuel, and I hope to get my license soon, but I don’t have a definite date or time,” she said. “Hopefully this year, but we’ll see what happens. I’d say that COVID probably pushed my plans back a little bit. I want to do it the right way; not just jump in a Top Fuel car just to say I’ve done it. I want to be with a good competitive team, and if it takes a while to find the right fit, I’m willing to be patient.”

If she needs additional inspiration, Nataas doesn’t have to look far to find it. Recent Gainesville winner Josh Hart is also a former TAD alum and so is 2020 NHRA Rookie of the Year Justin Ashley. Nataas defeated Hart to win in Gainesville last season, and Ashley came to Top Fuel from the Randy Meyer Racing program. Nataas also looks at her close friend, Jonnie Lindberg, who moved from Sweden several years ago to follow his NHRA dreams and has two Top Alcohol Funny Car championships and a very respectable nitro résumé to show for it.

“Right now, things are difficult for the Europeans because they can’t travel, but once things open back up, I think you’ll see more of them come over here,” Nataas said. “There are a lot of talented racers over there, but they don’t get as many opportunities to run as we do. It’s hard for them to find sponsorship, and the travel is tough, but the talent is there.”