The messages started almost immediately after Josh Hart crossed the finish line first in Gainesville, the last moments of his dream weekend in his Top Fuel debut at the Amalie Motor Oil NHRA Gatornationals. They also haven’t let up, and it may be weeks before Hart can respond to them all.
18 Mar 2021
Josh Hachat
Feature

The messages started almost immediately after Josh Hart crossed the finish line first in Gainesville, the last moments of his dream weekend in his Top Fuel debut at the Amalie Motor Oil NHRA Gatornationals.

They also haven’t let up, and it may be weeks before Hart can respond to them all.

As of Wednesday evening, there are more than 5,000 new Facebook requests and 1,100 text messages Hart still has to answer.

That doesn’t account for the hundreds he’s already answered, all offering congratulations for his incredible triumph and victory to kick off the 2021 NHRA season and his Top Fuel career.

“It’s just unbelievable and overwhelming. I’ve never experienced anything like this before,” Hart said. “It hasn’t sunk in yet, but it was definitely an awesome weekend.”

Hart has excelled in big moments, winning the NHRA U.S. Nationals twice in his Top Alcohol Dragster career, but last weekend in Gainesville took things to a new level.

The soft-spoken Ocala, Fla., native was locked in driving his  Burnyzz/Technet dragster, his confidence fueled by the masterful job tuner Ron Douglas and his team have done as Hart has opened his Top Fuel career.

The team lived in the low 3.80s to finish off Sunday, rattling off runs of 3.838, 3.811, and 3.826 to beat Steve Torrence, Justin Ashley, and then Shawn Langdon in the finals. Hart did his job on the starting line, but his mindset never wavered thanks to the job Douglas did.

“Ron Douglas was a magician, and the guys were amazing,” Hart said. “There no errors, and everything led to me being confident driving the hot rod. It was epic, but they’re the real magicians. Watching them in action, it’s pretty incredible."

Hart said early in the weekend he couldn’t get comfortable with his clutch pedal and asked Douglas to make an adjustment. It couldn’t have worked out any better, as Hart left first in every matchup during eliminations. That all goes back to the comfort level Hart feels working with Douglas, who has proven impressively effective in providing a calm influence for young drivers.

“We have the same demeanor, and we’re both pretty quiet, and when the engine fires up, it’s all business,” Hart said.

Hart became the first driver to win in his first race since the late Darrell Russell did it 20 years ago to open the season in Pomona, and the magnitude of the moment never got to him.

He could feel the buzz in the crowd at his home track and admitted to nerves when he would glimpse out in the stands and being star-struck in the lanes with the likes of world champs Torrence and Langdon.

But those emotions were blocked out when it counted, taking out Torrence in the second round and Langdon in the final to become the 110th Top Fuel winner. 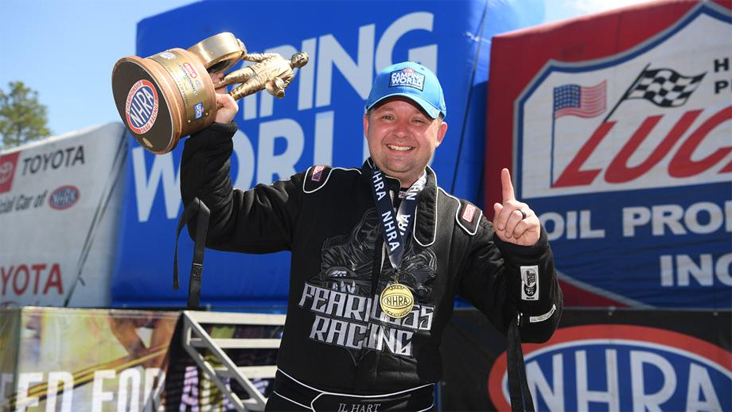 “You see names like Shawn and Steve pulling up against you, and it’s crazy,” Hart said. “I still get nervous when you turn the corner and see all those people, but when you fire up the car, all that goes away. I just had to run my race, and it worked out from there. It was definitely awesome.”

The aftermath has been just as enjoyable for Hart. He’s received calls from Torrence, Don Schumacher, and Darrell Gwynn, and congratulations from Don Garlits, which has made a special moment even more incredible.

Hart will be sure to treasure it all, but it already has him excited to build on the victory when he returns to action in Atlanta at the end of April. He’s also well aware not every weekend can be as magical as Gainesville just was.

“In this sport, I’ve been on top of the world and down in the dumps. I know they all don’t go like [Gainesville],” hart said. “We’ll go to the next one, try to stay consistent, hurt some feelings, and keep building our program.”