The legendary 16-time world champ put another impressive stamp on his 2021 season on Sunday at Heartland Motorsports Park, driving past J.R. Todd in the final round to win the Menards NHRA Nationals.
15 Aug 2021
Josh Hachat
Race coverage

For the first time in seven years, John Force is the Funny Car points leader.

The legendary 16-time world champ put another impressive stamp on his 2021 season on Sunday at Heartland Motorsports Park, driving past J.R. Todd in the final round with a pass of 4.019-seconds at 321.04 mph in 11,000-horsepower PEAK Blue DEF Platinum Chevrolet Camaro SS to win the Menards NHRA Nationals presented by PetArmor.

He also shared the winner’s circle with his daughter, Brittany, for the first time as she won in Top Fuel, marking the first father-child duo in NHRA Camping World Drag Racing Series history to win on the same day together.

“That just means a lot. I finally got that double and we’re all really happy about it,” Force said. “With Courtney and Ashley, I never got the chance because they were always in Funny Car in the finals and usually beat me. So this was really special I just had a good day and I love racing. We had a great crowd here Saturday and today and that was great to see. When we see the crowd, we come alive.” 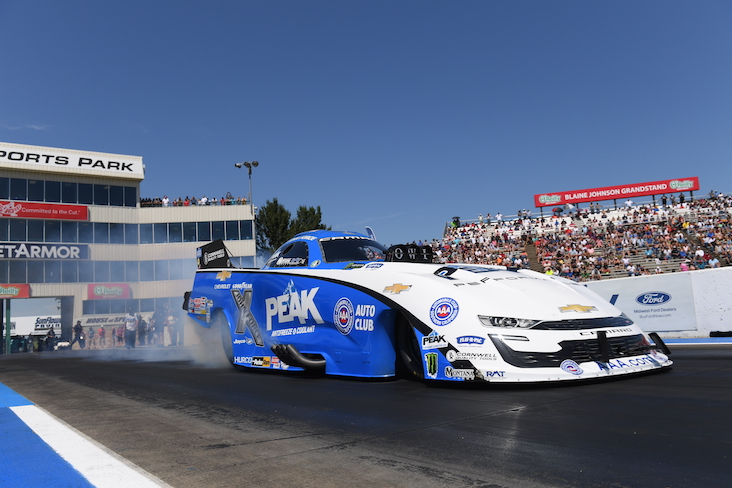 Force was remarkable all weekend, posting a pair of solid qualifying runs on Saturday, and was arguably the most consistent heading to eliminations.

He now has 260 final round appearances, doing so in Topeka on Sunday thanks to round wins against Paul Lee, teammate Robert Hight and longtime rival Cruz Pedregon. To reach his fourth final round this season, Force was impressively consistent, running in the mid-3.90s both Saturday in qualifying and early on Sunday before knocking off Pedregon with a 4.005 at 321.35.

Todd left first in the final round and led at the 330-foot mark, but he started spinning the tires and finished with a 4.453 at 199.29. Force, meanwhile, had another consistent run as he became the first driver in the class to pick up three wins this season.

“Robert, was probably my toughest race because it’s hard to beat Robert. I just had a car that was pretty fast,” Force said. “J.R. Todd had the quickest car and I told him in the final year he was the baddest kid on the planet here in Topeka. The competition makes you better every time.”

Todd’s path to the final round, his second in a row and fourth this year, including victories against Ron Capps, who entered the weekend with the points lead, and Blake Alexander. He went 3.996 against Capps, posting a holeshot victory to get past the veteran. It also was Todd’s 39th career final round.

Despite falling in the finals, Todd made a major move in points, going from sixth to third. He’s just nine points back of Ron Capps, who entered the weekend in the lead but now trails Force by 29 points.