Joe Morrison, Leverichs working hard behind the scenes to establish themselves

Not every aspiring nitro racer has the deep pockets or deep connections that can pave their way to a full-time ride in a top-tier car. For those without, the course of success takes equal parts ingenuity, determination, and the willingness to build from scratch.Just ask Joe Morrison
11 Apr 2021
Phil Burgess, NHRA National Dragster Editor
Feature

Not every aspiring nitro racer has the deep pockets or deep connections that can pave their way to a full-time ride in a top-tier car. For those without that built-in launch pad, the course of success takes equal parts ingenuity, determination, and the willingness to build from scratch.

Just ask Joe Morrison, who has worked his way through the nostalgia ranks and Top Alcohol Dragster to a seat in the Leverich Racing Top Fuel dragster. Morrison made his Pro debut at last year’s Lucas Oil NHRA Summernationals in Indy and competed at three other races in the shortened season, and he and the team worked relentlessly behind the scenes to set up a 10-race campaign for 2021.

While the Leverich family has been a part of the NHRA landscape for decades, they began a Top Fuel renaissance over the last few years by hiring drivers like Smax Smith and Audrey Worm to work on their overall performance and infrastructure, and the hiring of Morrison in late 2019 brought them not just a driver but also a marketeer, cheerleader, and team builder. 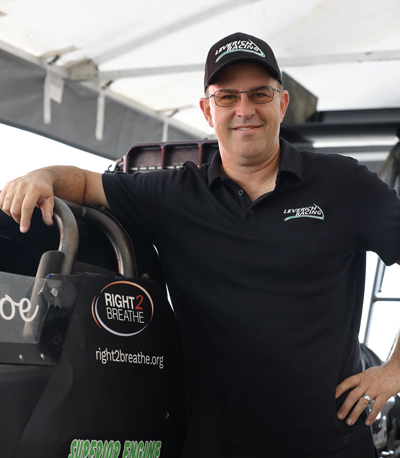 “As a small business owner, I know firsthand what it’s like to struggle to meet payroll,” said Morrison, who started a small landscape business in 1994. “While I do not have vast financial resources, I do believe that all it takes to make a difference is the willingness to step forward, take a risk, and act. I told John Force in Gainesville that I admire what he’s built. I am a guy who is basically a nobody, coming from a blue-collar family. On paper, I should not even have a chance. What I do have is an intense passion for our sport and the relentless dedication to make it happen. Failure is not an option I’m willing to accept.

“My story is one of being creative, persistent, and doing what it takes to survive while acting ethically, respectfully, while working to give back to the community and providing as much value as I can to our sport, sponsors, and fans.”

Morrison’s Right2Breathe program, which offers asthma and COPD education, has gained major attention and attraction the last couple of years and recently began working with Grace Anne Dorney-Koppel and her husband, former news anchor Ted Koppel, on a new initiative called COPD-SOS to help find the “missing 14 million,” referring to the 14 million Americans (as calculated by the Centers for Disease Control) who have the early stages of COPD but are not yet diagnosed or treated.

Morrison and the Leverich team also announced earlier this year the #RacersToTheRescue program that provided a much-needed boost to Billy Bobz BBQ in Gainesville, providing more than $2,500 in additional business just through the race weekend alone. It was the first event for the campaign, which will run throughout 2021, and was a good start. The campaign will help at least one business in every market where Leverich Racing competes.

The goal, of course, is to become more competitive, and the team also has made major strides in those efforts, acquiring technical help from Rob Flynn as well as purchasing parts from Kalitta Motorsports and an upgraded fuel pump by Rob Wendland. The team also enhanced its appearance with a new paint design by Specialized Auto Craft, the same New Jersey body shop that has painted memorable cars like the Frantic Ford and Super Camaro Nostalgia Funny Cars as well as Bob Dauernheim’s Bonneville streamliner.

“The overall goal is improved performance, to be consistently running mid-3.80s to low 3.90s in order to qualify better to have a better shot on race day,” said Morrison. “We now have the equipment to make that a reality. We’re also working on our attention to detail in our maintenance and preparation to be able to make more clean A-to-B runs.”

Improved equipment, processes, and resources will allow for better race-day finishes mean more publicity and the type of return on investment that sponsors are seeking, which will allow the team to grow its program.

The results are already beginning to manifest with new partnerships with CForce Water (actor Chuck Norris’ bottled water company) and the D-A Lubricant Co. and PennGrade1 Oil, a sponsor that has returned to the Top Fuel class after a two-year hiatus.

The Leverich team also has aligned with Smith Systems to improve its data acquisition and improve reliability and durability with crank triggers and sensors. The company, which is involved in mass transit and has sensors on every space shuttle, is new to drag racing and never in Top Fuel before. RACE Software, an innovative company who is working with the team to optimize safety and performance of our chassis through cutting-edge simulation software to analyze the intense forces acting on the car, also has joined the operation as has SpeedPro Graphic & Sign Company, which through its local franchisee in Piscataway, N.J., is working on its national social media marketing. Americana Global, a car-care products company that makes high-end soaps, cleaners, wax, and polishes, recently joined the team and will be contributing a percentage of sales to #RacersToTheRescue as well as an associate partnership with the team.