'I wouldn't bet against me.' Bob Tasca III looking for points rebound in Charlotte

After dominating the first half of the season, leading the Funny Car points from the second through ninth events of the season, Bob Tasca III suddenly finds himself in sixth place and looking for a comeback weekend in Charlotte.
18 Sep 2021
Phil Burgess, NHRA National Dragster Editor
Feature

After dominating the first half of the season, leading the Funny Car points from the second through ninth events of the season on the strength of two wins and a runner-up, Bob Tasca III suddenly finds himself in sixth place entering the DeWalt NHRA Carolina Nationals, yet still very much in the hunt for what would be his first career championship.

Tasca and his Mike Neff- and John Schaffer-led Motorcraft/Quick Lane Ford team were able to finish the regular season in third place for the Countdown to the Championship points reset but tumbled down to sixth after a tough first-round at the Countdown-opening event last weekend in Reading, losing to Paul Lee despite a 3.906 pass. He's in sixth, but still just 66 points out of the lead.

“It is what it is, you know?” he said. “This is a right place kind of sport. We got picked off against Paul Lee in that first round. I think [three] other pairings we would have won.

“It's the ebb and flow of the season. Fortunately, we earned ourselves the No. 3 spot so we can absorb a bad weekend like we had in Reading, especially with seven races in the Countdown this year, but I can't absorb two, so we've got to come out of here semifinals on better is my feeling.” 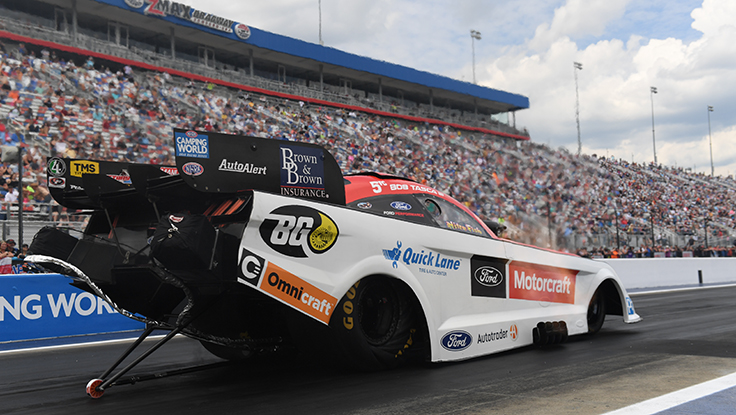 Tasca’s slide down the standings began in the Western Swing, winning just two rounds in the three races. His second-round loss in Pomona combined with Ron Capps’ win took away the lead that Tasca had held since the Las Vegas four-wide race in April. Another first-round loss in Topeka dropped him to fourth but a semifinal in Brainerd brought him back to within 15 points of the lead. He slid to third after a second-round loss in Indy.

“We went through some real iterations of clutch discs that really set us back this summer,” Tasca observed. “Obviously we were disappointed with our West Coast swing big time, but we kind of caught our rhythm. We weren’t running .80s in Reading, and we needed to run that to win that race. So clearly, we will off a click, but I think Mike and John will make the right adjustments.

“We’ve got a set of clutch discs that we can finish the year off with, so we’ll have no changes when it comes to that. We just got to get this thing to run .80s. We know how to do it. We've done it and we’ve got to keep doing it.