Salinas won the most recent event at the track in 2019 and is now a back-to-back winner in Thunder Valley, ousting Steve Torrence in the final round of the NHRA Thunder Valley Nationals on Sunday.
17 Oct 2021
Josh Hachat
Race coverage

Even after a year away, Bristol Dragway continues to treat Mike Salinas very well.

Salinas won the most recent event at the track in 2019 and is now a back-to-back winner in Thunder Valley, ousting Steve Torrence in the final round of the NHRA Thunder Valley Nationals on Sunday when the points leader went up in smoke on the starting line.

Salinas went 3.854-seconds at 245.05 mph in his 11,000-horsepower Scrappers Racing dragster to clinch his first victory of the season and also the first since that Bristol triumph on Father’s Day weekend two years ago. This one came in October and during the fifth race of the Countdown to the Championship and it felt just as good for Salinas, who picked up his third career win.

“It’s a great facility and I’m glad they welcome us here,” Salinas said. “This track loves me. I met so many nice people over the years here. We’ve got a great team, and all the parts and pieces, and I think I threw away 3-4 races at the beginning of the year trying to get my routine down. It’s hard when you’re running with all these guys, but I got a lot of help and I’ve made some big improvements.” 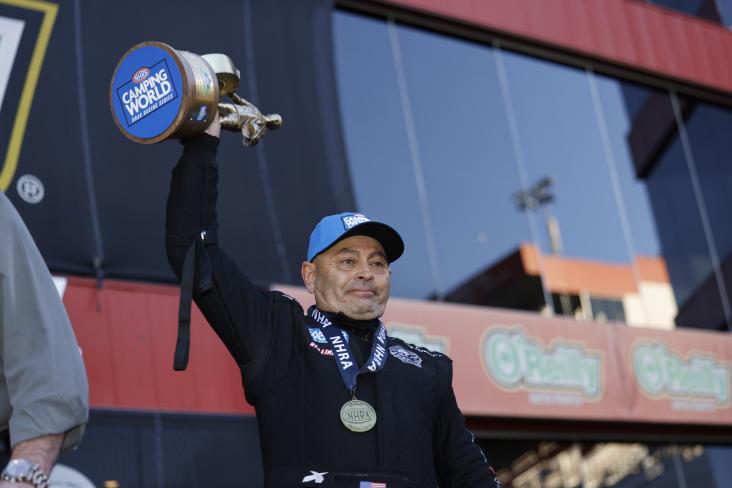 Salinas was impressive in reaching the final round for the third straight time at Bristol, knocking off Antron Brown, Clay Millican and Brittany Force. He went 3.672 to easily dispatch Brown and then turned in a 3.698 to get past Force in the semifinals, who ran into trouble almost immediately to thwart her chances. Salinas was also strong on the starting line, showing considerable improvements there on Sunday in Bristol.

That’s been a point of focus for the team and he came through in a big way this weekend in Bristol, which has quickly become a special place for Salinas. He fell in the final round against Tony Schumacher in 2018, but has responded with two standout performances, winning both times against Torrence in the final round at Thunder Valley.

Salinas also competed in Pro Mod at Bristol, advancing to the semifinals as part of his memorable weekend.

“It's really fun to run both classes,” Salinas said. “My head’s in the right place. It’s taken me a while to get here, but it’s starting to get a little easier. I’m going to be able to cut some pretty decent lights. These guys in this class, they’re awesome. They cut good lights I found something that works perfectly for me and I think we’re getting there. I just try to race my lane and that’s it.”

It wasn’t the end result Torrence, the No. 1 qualifier and three-time defending champ, wanted, but he still stretched his points lead thanks to Force going out in the semifinals. It’s now 73 points over Force heading into the final two races.

To reach the final round, Torrence went through Cameron Ferre and Justin Ashley, with the Ashley duel turning into an absolute thriller. Ashley got the best of Torrence in the final round last weekend in Dallas — and in the semifinals at the opening playoff race in Reading — but Torrence exacted some revenge on Sunday in Bristol.

In an absolute thriller, Torrence laid down a run of 3.677 at 331.69 to slip past Ashley and his strong run of 3.697. Ashley set the track speed record earlier in the day with a blast of 334.48, but Torrence was on point in their semifinal matchup.