On her 33rd birthday, Leah Pruett celebrates her 25th year in drag racing

Leah Pruett turns 33 years old today, and while birthdays are always a momentous occasion, this particular year is extra special for Pruett as it marks the 25th anniversary — to the day — that her NHRA career began.
26 May 2021
Posted by NHRA.com staff
Feature

Leah Pruett turns 33 years old today, and while birthdays are always a momentous occasion, this particular year is extra special for Pruett as it marks the 25th anniversary — to the day — that her NHRA career began.

Pruett, a native of Redlands in Southern California, grew up around racing, and her journey to becoming a bonafide championship-contender in the NHRA’s premier Top Fuel category started when she officially joined the NHRA’s Jr. Dragster youth racing program on her eighth birthday.

Pruett was bitten by the racing bug early on. Her father, Ron, was an avid land speed racer and her sister, Lindsey, who is four years older, was already competing in the Jr. Dragster program by the time Pruett had turned six. Back in 1996, aspiring drag racers had to wait until their eighth birthday to be able to strap into a Jr. car and enter an event, and Pruett was chomping at the bit to have her shot on the dragstrip. 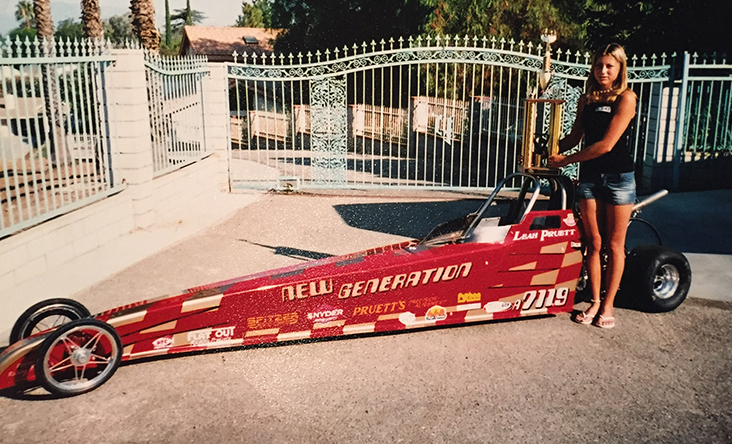 “I remember it like it was yesterday,” said Pruett, who has become the No. 1-ranked social media influencer among NHRA drivers and personalities, cementing her place as one of the sport’s brightest stars. “That weekend, my birthday was on a Sunday. I had my car ready to go, but I wasn’t allowed to race at all on Saturday. I just had to sit and wait until Sunday when I turned the legal age of 8. I had to run a big pink ribbon on my roll cage that signaled to the world that I was ‘as rookie as a rookie could get.’ I had already moved past my ‘pink’ phase in those days, and I couldn’t wait to get that ribbon off my car, which you weren’t able to do until you competed in an event.

“I was in the left lane, and did a blistering 21-second pass to the eighth-mile at 24 mph,” added Pruett, who will be running a silver ribbon on her 334.15-mph DSM Precision Manufacturing Top Fuel dragster at the upcoming NHRA New England Nationals in Epping, N.H., signifying her 25th “silver” NHRA anniversary. “It was a gas-powered, five-horsepower Briggs & Stratton pull-string Jr. Dragster. From five-horsepower, the most basic as you can get, to now driving the fastest accelerating machine on earth; it’s still one of those things that is hard to wrap my head around.” 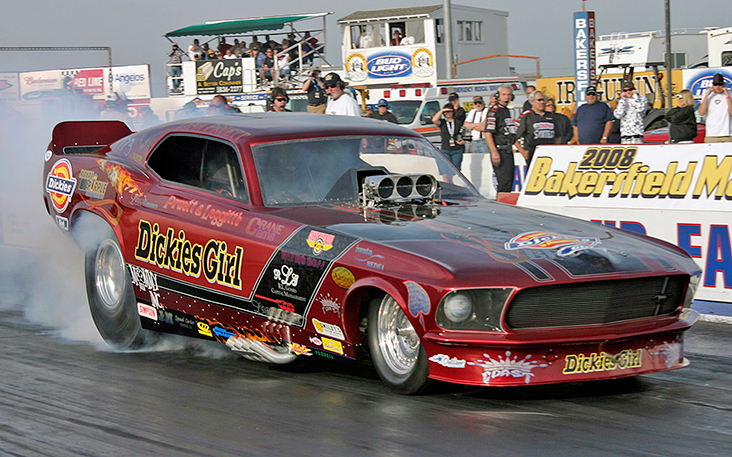 That “pink ribbon day” was only the beginning for Pruett, an eight-time Top Fuel winner. From age 8 to 16, she won a whopping 37 Jr. Dragster trophies, and two Division 7 championships in 2000 and 2001. From there, she rose through the drag racing ranks, competing in the NHRA’s Hot Rod Heritage Racing Series, where she won the 2010 championship title in the Nostalgia Funny Car category and became the first person to break the 250-mph barrier in the class before moving into the NHRA Pro Mod Drag Racing Series, where she is a three-time NHRA national event winner.

Pruett transitioned to the Professional Top Fuel category in 2013. She joined Don Schumacher Racing in 2016 and has recorded a Top 10 finish every year since. In 2017, she added “double-duty driver” to her impressive racing résumé when she announced that she would be competing in the NHRA’s new Factory Stock Showdown Series in addition to her responsibilities behind the wheel of a Top Fuel dragster. It quickly became evident that Pruett would have no problem perfecting the art of swapping back and forth between her Dodge Drag Pak and dragster when in 2018, she was crowned the Factory Stock Showdown champ during her first full season competing in the class.

While Pruett, who has held NHRA competition licenses in seven different categories, has checked a lot of boxes on her racing bucket list since 1996, in her mind, she’s only just getting started.

“My current goal is to transition from success to significance,” explained the Lake Havasu City, Ariz., resident, who was recently named the Motorsports Hall of Fame of America’s Honorary Chairperson for the Class of 2021. “My whole life, I have chased wins and the resources that enable me to win, which I categorize as the chase for success. The pursuit of internal significance, where success is then a byproduct, is my current generational focus.”