Green? No worries for DSR drivers

It’s a well-known fact around motor racing that many consider green to be an unlucky color. On this St. Patrick's Day, members of Don Schumacher Racing weigh in on whether or not they believe green to be lucky or unlucky.
17 Mar 2021
Posted by NHRA.com staff
Feature

It’s a well-known fact around motor racing that many consider green to be an unlucky color. On this St. Patty’s Day, members of Don Schumacher Racing weigh in on whether or not they believe green to be lucky or unlucky:

“My first ever Top Fuel race win [Phoenix, 2016] was in an all-green car, so for me, green is good luck.” — Leah Pruett, driver of the Mopar Dodge//SRT Top Fuel dragster 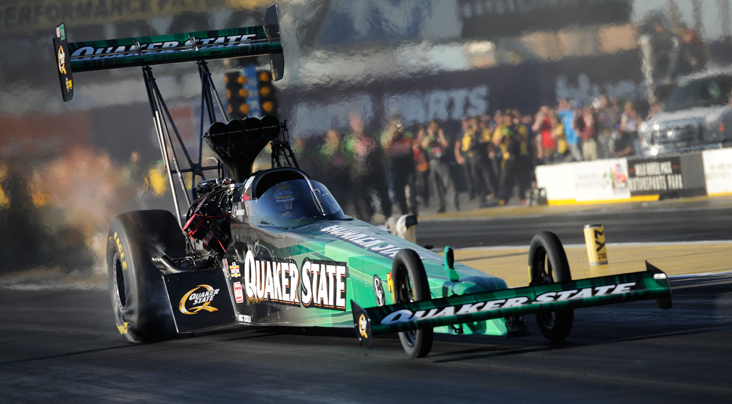 “I really don’t care what color my race car is. It doesn’t make a difference if it’s green, blue, black, purple, silver. Green is not my kryptonite.” — Antron Brown, driver of the Matco Tools Toyota Top Fuel dragster

“Green, blue, purple, pink, yellow. I don’t care what color my car is, as long as it’s fast, and as long as it's got a DSR Hemi in it.” — Matt Hagan, driver of the Mopar Dodge Charger SRT Hellcat Redeye

“The green thing goes way back. A lot of drivers don’t like to have green on their race car, or even in their pit area. I always thought that was dumb because as a kid growing up, John Force’s cars were always green, and he won absolutely everything. And green is the color of money." — Ron Capps, driver of the NAPA Auto Parts Dodge Charger SRT Hellcat

“How do I feel about the color green? Let’s put it this way. This past weekend in Gainesville, I borrowed some chalk for the starting line, and it happened to be green. I broke a piece off, marked my spot on the line, and put it in my pocket. Needless to say, we were about to go up for Q3, and there was a chance we could get bumped out, so I took that green chalk out of my pocket and put it back where I found it. I’m not real wild about having green M&Ms in my pit or bananas either, for that matter. That comes from an old crew chief I used to work with back in the day, and something I ended up adopting. If we’re not running well, and there’s a banana in the trailer, I’ll take it out of our pit area and put it in someone else’s trashcan.” — Brian Corradi, crew chief for the Matco Tools Toyota Top Fuel team

“So, when I first started racing, everyone said green was bad luck. I tend not to believe that now after watching John Force with his green cars, and Tony Schumacher, who had a lot of green in his Army paint schemes. They’re the two winningest drivers in our sport. They’ve won a lot of races over the years, so I’ve given up on green being bad luck.” — Neal Strausbaugh, co-crew chief for the Mopar Dodge//SRT Top Fuel team

“I don’t find green to be unlucky. Look at John Force, he had a green car for years and won everything. At the end of the day, if a company is willing to put their logo on a car and be a part of our sport, I welcome it, regardless of what their company’s colors are.” — Mike Knudsen, assistant crew for the Mopar Dodge Charger SRT Hellcat Redeye

“There’s always been a superstition about green and racing, and St. Patty’s Day brings it up every year. Personally, my dad raced green cars when I was a kid and thought it was lucky, so I guess I have the opposite viewpoint of a lot of others out here.” — Dean ‘Guido’ Antonelli, co-crew chief for the NAPA Auto Parts Dodge Charger SRT Hellcat

Drag racers can be a superstitious bunch. Check out this Dragster Insider article on drag racing superstitions.