Friday’s low qualifiers at the DeWalt NHRA Carolina Nationals all held onto their top seeds on the final day of qualifying, with Brittany and John Force in the No. 1 spots in Top Fuel and Funny Car and Aaron Stanfield and Steve Johnson holding sway in Pro Stock and Pro Stock Motorcycle,
18 Sep 2021
Phil Burgess, NHRA National Dragster Editor
Race coverage

Friday’s low qualifiers at the DeWalt NHRA Carolina Nationals all held onto their top seeds through two sessions on the final day of qualifying at zMAX Dragway, with Brittany and John Force holding a family reunion in the No. 1 spots in Top Fuel and Funny Car and Aaron Stanfield and Steve Johnson holding sway in Pro Stock and Pro Stock Motorcycle, respectively.

Force and the Monster Energy team not only held onto the No. 1 spot they first earned Friday night with a 3.662, but also took over the points lead from Steve Torrence thanks to having the best run of all three sessions. Force, who came into the event trailing Torrence by 12 points, picked up nine session points and eight more for the No. 1 spot while Torrence gathered only four points for his No. 5 qualifying spot, giving her a one-point edge heading into Sunday.

“There's nothing like getting three solid runs down the racetrack before going into eliminations. So we feel good about it. We had solid, consistent runs, and feel good about and I think we got a good spot for tomorrow. And looking to go looking to have a long day.”

Although they couldn’t better their Friday pass, Force’s Dave Grubnic-led team certainly didn’t rest on its laurels. They pounded out runs of 3.730 and 3.677, both of which were the quickest of Saturday’s two sessions. It’s Force’s eighth straight No. 1 qualifying effort.

Mike Salinas moved his Scrappers entry into the No. 2 spot with a last-run 3.679, just two-thousandths behind Force and fulfilling the promise of an aborted Q2 that also seemed headed for the 60s.

Clay Millican dropped from second to third after failing to better his Friday 3.708 but did chart a 3.734 on his final pass. Reading winner Billy Torrence is fourth with his Friday-night 3.729 and his son Steve, who is battling tooth and nail with Force for the championship lead, finally got a good pass down, a 3.739, that boosted him from 10th to fifth in the final session.

Torrence jumped from 10th to fifth with a last-session 3.739 and rookie Josh Hart also made a major leap, improving on his Q2 best by more than a tenth of post a 3.762 with the R&L Carriers entry

John Force collected his record 163rd No. 1 qualifying effort, putting his Peak BlueDef Camaro in the top spot with his Friday 3.860. Although several teams, including Force, ran in the threes Saturday, no one even got close to his field leader, and even Force didn’t make it down the track in the day’s first run. 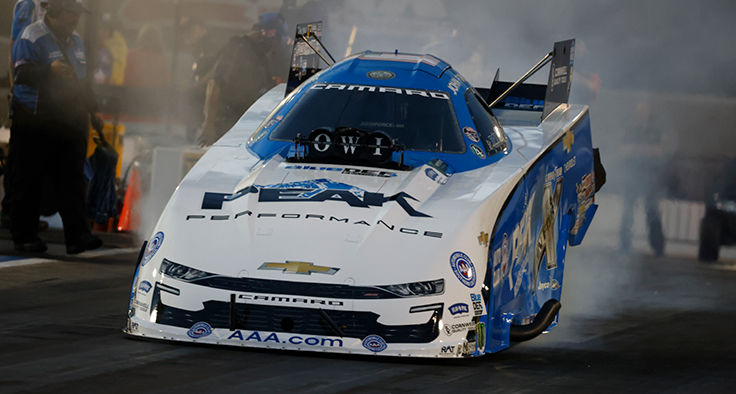 “We pulled her back when Robert [Hight, running ahead of him] smoked the tires,” he explained. “We pulled it back, thinking it wasn’t out there and it was so weak it shook. So Danny [Hood, crew chief] just said, ‘We're going to make it go A to B get ready for tomorrow.’ It dropped the hole on that last run [3.942] because it got me over [towards the centerline] at the other end, but overall for the weekend we’re excited about it.”

Force also got to share the No. 1 qualifier spot with daughter Brittany for the third time this year, which also has him pumped up.

“I love my kid,” he said. “I love to see her do good even though she and I go run around a lot. I'm really proud of her. It's exciting for me to watch her excel.”

Unfortunately for Force, he crossed the centerline just past the finish line on his Q3 pass, garnering a 10-point penalty that moved Matt Hagan into the points lead.

Robert Hight remained No. 2 and Cruz Pedregon third with their respective Friday runs of 3.878 and 3.879

Hagan put together a nice trio of runs in qualifying, with a 3.891 from Friday being followed by passes of 3.917 and 3.893, and was the only driver to make a three-second pass on all three runs.

Despite a so-so second qualifying day on the track, Stanfield held onto the No. 1 spot for his first career pole position thanks to his Friday 6.575. He and No. 2 qualifier Erica Enders, who also stood on her Friday pass of 6.578, were only sixth and fifth, respectively, in the final qualifying session and Stanfield was just eight quickest in Q2, but the driver of the Janac Brothers Camaro was nonetheless elated and hinting that the numbers you see don’t mean as much as one might think.

“The first round we missed it a little but we were pleased with what we saw in Q3,” said Stanfield. “Obviously we saw some very different track conditions today, different weather and we felt like we made a pretty decent run so hopefully we can kind of carry that that momentum into race day.

“We want to build off that Q3 run and if I can stay on my game behind the wheel and we can make the right calls, we can have a long day.”

Greg Anderson, looking for a class-record 98th win this weekend, sits third, also with his Friday pass of 6.580 but his class-leading 6.584 in the final session and his second-session-leading 6.602 means he may be a handful Sunday.

Johnson collected his sixth career No. 1 qualifying effort with a dazzling 6.788 in the day’s first session, bettering his Friday-night 6.807 by almost two-hundredths aboard his Brady Mechanical Suzuki. Johnson also had the quickest run of the final session with a 6.814 to solidify his position as the Sunday favorite.

I didn't do really good on that last lap, but the one before we're pretty darn proud of that,” he said. “I'm proud as heck of how we're running. It's all really, really small adjustments. Like, you’d be shocked. So, the first run we got to learn for Q1 and we made little tiny adjustments and I rode it better. 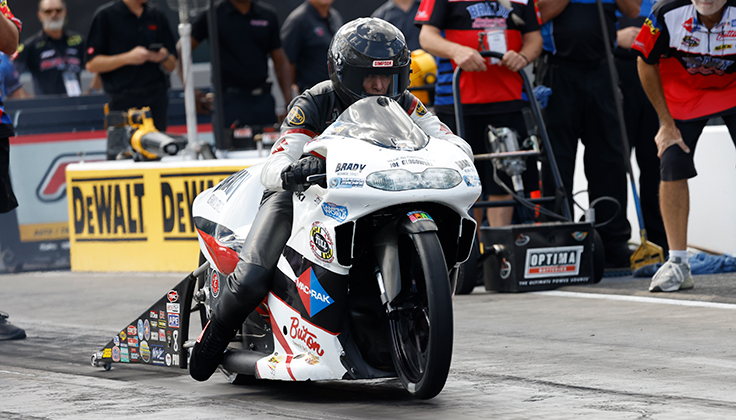 Johnson is slated to face No. 16 qualifier Chris Bostick, but Bostick posted on social media that valvetrain issues likely will keep him from contesting that round meaning a fee first-round ride for the points leader.

No. 2 qualifier Angelle Sampey had a forgettable day, having her Q2 pass invalidated after she left before the Tree and then running just 7.40 on her final pass, but she still finished No. 2 thanks to her Friday night pass of 6.848 aboard the Mission Foods Suzuki.

Reigning world champ Matt Smith improved by a thousandth of a second over his Friday best of 6.852 and set top speed of the meet at 199.40 for the third position. Joey Gladstone also may have a say in Sunday’s outcome after riding to a pair of 6.88s on his two Saturday passes with a best of 6.883.