Force, Hagan and Smith lead the way after thrilling nighttime qualifying in Denver

The fields are set for the Dodge//SRT NHRA Mile-High Nationals and Brittany Force, Matt Hagan, and Matt Smith will begin final eliminations as the top seeds in their respective categories

As expected, Saturday’s nighttime qualifying session at the Dodge//SRT NHRA Mile-High Nationals produced the best elapsed times of the weekend as racers in Top Fuel, Funny Car, and Pro Stock Motorcycle zeroed in on the combination needed to thrive in Denver’s thin mountain air.

Steve Torrence led the way on Friday after an impressive 3.77, but Brittany Force stole the show under the lights on Saturday night with a track record 3.717, 326.00, a run that would be impressive on any track under any conditions. Force is the top qualifier for the third time this season and the 23rd time in her career. The Monster Energy driver is also the qualifying leader at the four-wide events in Las Vegas and Charlotte, but she’s still looking for her first win of the season.

“You know it’s just this whole Monster team,” said Force. “At John Force Racing, we took a step back during the 2020 season and my guys put their faith in JFR and from top to bottom they all returned, and I love every single one of them. David Grubnic [crew chief] said he was going to push it like he always does and we got it done. I’ve never won here in Denver. My dad has won but I really want to win on the mountain.”

Torrence was bumped back to the No. 2 spot but remains a favorite to defend the Denver title he won during the most recent event in 2019 while Mike Salinas (3.836) and Doug Kalitta (3.849) round out the quick four.

Alex Laughlin’s much anticipated Top Fuel didn’t happen on Friday night after his Scott Palmer-owned Havoline dragster had to be shut off on the starting line. Saturday produced much better results as Laughlin drove to a 3.933, which was quicker than he ran during his recent license runs. Laughlin also earned a qualifying bonus point during Saturday’s first session. He later improved to a 3.900 and also topped 300 mph for the first time with a 316.67-mph top speed. Laughlin finished as the No. 5 qualifier in his Top Fuel debut. 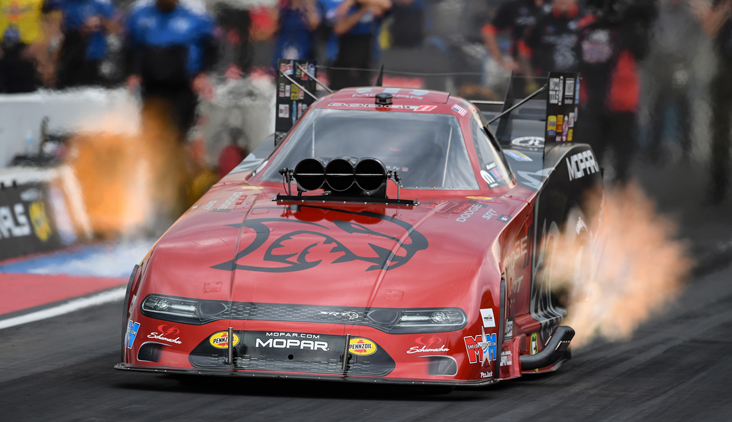 Matt Hagan’s 3.966 From Friday went unchallenged for the duration of Saturday’s two runs and the field for the second time in the last three races. Hagan ran a 4.00 on Saturday afternoon and he aborted his final round after his Hellcat Charger shook the tires Hagan will race rookie Chris King in the opening round and the winner of that battle will get a bye run into the semifinals.

“We’ll take No. 1 qualifier and take that momentum into Sunday,” said Hagan. “We’ve got to go rounds tomorrow. Our Hellcat Charger was running so strong that the rear end was trying to pass the front end on that last [qualifying] run. We had nothing to lose so we went for it. I cannot wait to put on a show tomorrow for all these awesome fans in Denver.”

Alexis DeJoria also held on to the No. 2 spot with her ROKit/Bandero Premium Tequila Toyota thanks to a 3.982 on Friday night. Saturday’s best run was turned in by No. 3 qualifier Tim Wilkerson, who wheeled the Levi, Ray & Shoup Mustang to a 3.984, which bumped Ron Capps’ 3.986 to fourth.

Sunday’s most intriguing matchup features an intermural scrimmage between teammates John Force and Robert Hight. Force qualified No. 5 with a 4.014 while Hight was No. 10 in his Auto Club Camaro. The match also has huge points implications as Force is No. 2 while Hight entered the Denver race as the No. 4 ranked driver in the Camping World NHRA Funny Car standings.

Pro Stock Motorcycle points leader Matt Smith led the way on Friday and to no one’s surprise, he bettered that mark twice on Saturday including a 7.113 To earn the top spot for the second time this year and the 45th time in his career. Smith was the leader after all three sessions on his Denso Buell, banking nine qualifying bonus points. For all his success, Smith was slightly agitated that he didn’t make Bandimere Speedway’s first 7.0-second or 190-mph pass. Smith’s wife, Angie, also turned in one of the best qualifying performances of her career with a 7.134.

Steve Johnson’s Friday run was disqualified when his fuel failed a post-race check, but he quickly righted the ship with a strong 7.163 on his Colorado Christian University Suzuki. Johnson, who has qualified well at recent events and has been a finalist at the two most recent races in Charlotte and Norwalk, credits the new four-valve cylinder head from Monster for his recent uptick in performance.

Eliminations begin at 11 a.m. CT on Sunday at the Dodge//SRT NHRA Mile-High Nationals.