The focus for Chip Ellis in Charlotte is simple: have fun and go 200 mph

Chip Ellis was back with Matt Smith Racing for a third straight race on Friday at zMAX Dragway. After racing at the four-wide event in Las Vegas, Ellis took Matt Smith up on his offer to race in Charlotte.
14 May 2021
Josh Hachat
Feature

Chip Ellis was back with Matt Smith Racing for a third straight race on Friday at zMAX Dragway. After competing at the four-wide event in Las Vegas last month, Ellis helped out on Angie Smith’s Pro Stock Motorcycle bike in Atlanta and then took M. Smith up on his offer to race at the four-wide event this weekend in Charlotte.

Along with both Smiths and Atlanta winner Scotty Pollacheck, it gives the team four bikes in action this weekend. It’s an easy trip for Ellis, who lives an hour from the track, but these days, the veteran goes by a different litmus test when making the decision to race.

“If it’s not fun for me, I’m not coming,” Ellis said. “I live an hour away, Matt asked me if I wanted to come ride and here we are. We’re going to have some fun and see how it goes. I’m having a great time and Matt always has fast stuff. I wouldn’t be here if I wasn’t having fun and we’re looking for a good result this weekend.”

Ellis was solid in his lone outing thus far, qualifying sixth in Las Vegas and advancing to the second round. He’ll continue working on A. Smith’s bike this weekend, while his daughter, McKenzie, will work on his bike. 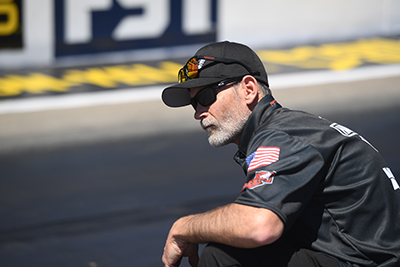 With a brain trust that also includes the likes of Michael Ray along with the contingent of talented riders, Ellis has enjoyed how it’s all come together.

It also a great opportunity to be at the track doing what he enjoys with people who mean a great deal to him.

"It’s family and it’s not just the Smith family. I’m good friends with everybody out here - the Hines, the Krawiec’s, the Sampey’s, the Arana’s,” Ellis said. “I love all these people and it’s nice to get out and see your friends.”

Ellis, though, is content in his role as a part-time rider and helper. Along with racing in Pro Stock Motorcycle, Ellis, who has seven career wins in the class, and his daughter also compete in boat racing, and his business takes up a large chunk of his time.

Still, the itch of riding will likely be enough to lure him back again in 2021.

“I say I won’t run anymore this year, but if the opportunity arises, I might,” Ellis said.

There’s also a big carrot dangling for him this weekend and that’s the chance to make a 200-mph run in the class and join the Denso 200-mph club.

All three of his teammates have done it and with ideal conditions likely during qualifying, Ellis has a clear goal in front of him at zMAX Dragway, which is also the site of his last win during the fall race in 2016.

“I’m confident I have a good motorcycle and good people surrounding me. I’m looking forward to going out there, popping the clutch and seeing what happens,” Ellis said. “There’s one spot left in the (Denso) 200-mph club and it would be awesome to get all four of these bikes in it. It would be good for Matt Smith Racing and good for myself. The air’s going to be there and I think the motorcycle’s there, so I’ve just got to go out and do my job.”