Five things we learned from the Lucas Oil NHRA Winternationals

The Lucas Oil NHRA Winternationals presented by ProtectTheHarvest.com was a brutal experience for everyone, but all who competed there or attended will in some way carry their experience as a badge of honor. Here’s five things we learned at the event:
02 Aug 2021
Phil Burgess, NHRA National Dragster Editor
Feature

There are no two ways to say this, but the Lucas Oil NHRA Winternationals presented by ProtectTheHarvest.com was a brutal experience for everyone. Three days of sweltering heat made it a survival story, and as miserable as that may sound, everyone who competed there or attended will in some way carry their experience as a badge of honor.

Here’s five things we learned at the Winternationals:

The nighttime nitro sessions helped, but it was still uncomfortably hot, and while fans didn’t exactly turn out in record numbers to brave the conditions, the hearty Pomona fans, who haven’t seen action at the fabled facility in 18 months, were there cheering their favorites, hydrating, seeking shade, and generally being smart.

After two days of mostly night qualifying, we heard nothing but “be-prepared” horror stories of what Sunday might be like with 140-degree track temperatures, but the crew chiefs – from the nitro cars to the Pro Stock classes and even down to the Sportsman ranks – turned dials and settings to places they’ve never been to adapt and overcome. While a lot of cars did experience some loss of traction, it was nothing like the smokefest we had been warned about, and there were no serious on-track incidents. Kudos to all!

HISTORY DOES REPEAT ITSELF

It wasn’t exactly a Simone Biles moment, but the decision by Justin Ashley’s team to have him sit out the final round after suffering from the heat was a good one. It had to be tremendously hard for the competition-driven Ashley to climb out of his car after getting buckled in for the final, but it was the right decision.

Believe or not, it’s not the first time it’s happened. Almost 50 years ago to the day, Top Fuel finalist Jim Harnsberger nearly collapsed in his pit area while preparing his car for the final round of the 1971 Summernationals. Harnsberger had already beaten none other than Don Garlits earlier in the event and was hoping for his first win before he was overcome. He actually was transported to the hospital for care and convinced the medical staff to let him return to the track to at least watch the final, where Arnie Behling (pictured above) soloed for the win.

TEAM DSR IS BACK 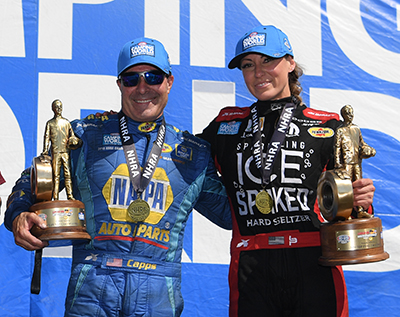 After dominating the Funny Car ranks in 2020 by winning all 12 events, 2021 was almost a 180-degree turn for the Don Schumacher Racing floppers. Of course, their numbers were cut from four to two, but it wasn’t until two weeks ago that reigning world champ Matt Hagan broke through in Denver with his first win of the year and now Ron Capps followed him to the winner’s circle.

Before Denver, Antron Brown’s Top Fuel win in Atlanta was their only score, but Leah Pruett made it a Pomona double, with crew chief Todd Okuhara completing a long uphill climb from some serious struggles earlier this year to get her the win and the DSR double in Pomona.

THE KIDS ARE MORE THAN ALRIGHT

Aaron Stanfield’s third win of the season is the most in Pro Stock – more than points leader Greg Anderson and more than four-time world champ Erica Enders – and continues the youth charge in the class.

Stanfield is second in points, Glenn is fifth, Kyle Koretsky (who had a runner-up late last year) is six, McGaha seventh, and T.J. is eighth, and all will almost assuredly make the Countdown to the Championship playoffs.

A MILLION STORIES IN SPORTSMAN CITY 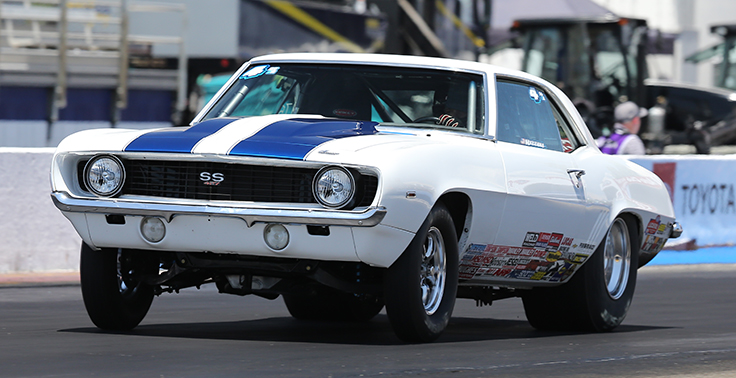 While the NHRA Camping World Drag Racing Series Pros get most of the headlines, the NHRA Sportsman ranks, week in and week out, continue to provide us with compelling storylines.

In Pomona, Kyle Rizzoli came within one round of joining the list of drivers to double up by winning two classes at the same event. Rizzoli won Stock but got beat in the Super Stock final by Pomona mainstay Jimmy DeFrank.

Joe and Kalya Mozeris, who raised eyebrows with their father-daughter wins in Comp and Super Stock in Denver, seemed bound for another after both reached the semifinals. Kayla got taken out in the semifinals, and Joe went to the Comp final but was turned away there by Tibor Kadar.

The family aspect was strong in Comp as two-time former world champ Dean Carter and his son, Kevin, looked like they were on a collision course for a family final in their match A/Nostalgia Dragsters until both were beaten in the semifinals, Dean by Mozeris and Kevin by Kadar.

Five things we learned from the NHRA Sonoma Nationals

Five things we learned at the TascaParts.com New England Nationals