Five things we learned from the Lucas Oil NHRA Nationals

NHRA’s annual trip to the wilds of Brainerd didn’t disappoint with a big crowd and some of the best racing of the season. Here are our five takeaways from the Lucas Oil NHRA Nationals.
24 Aug 2021
Kevin McKenna, NHRA National Dragster Senior Editor
Race coverage

A large and enthusiastic crowd got to see not only some of the quickest runs of the season in Top Fuel and Funny Car but also a lot of close side-by-side racing across the board. Here are five things we learned from the event:

BOB TASCA III IS BACK 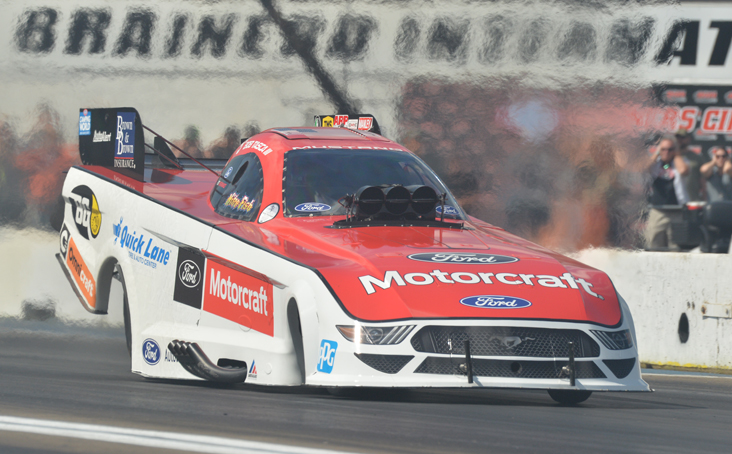 He didn’t win the event, but Bob Tasca III showed in Brainerd that his Motorcraft/Quicklane team plans to be a big factor in the upcoming Countdown to the Championship playoffs that begin next month in Reading. You might recall that Tasca took over the lead in the Camping World Funny Car standings following his early-season win in Las Vegas and held it for eight events until a disastrous Western Swing that produced just two win lights.

Tasca also lost early in Topeka, dropping to fourth in the Countdown, but he and crew chief Mike Neff appeared to regain their early-season magic in Brainerd with a very impressive 3.870 to qualify in the No. 1 spot and a semifinal finish on Sunday. Tasca made the quickest run of Sunday’s eliminations with a 3.899 before dropping an extremely close race against eventual winner Matt Hagan in the semi’s. On Monday after the event, Tasca tested made three more solid runs, all well above 330 mph.

The end result is that Tasca heads to Indy with all the confidence in the world, and why now? He’s now second, just 15 points behind Hagan in the standings, and with just 25 points separating the Top Five, it might not be necessary for a reset during the opening round of the Countdown. 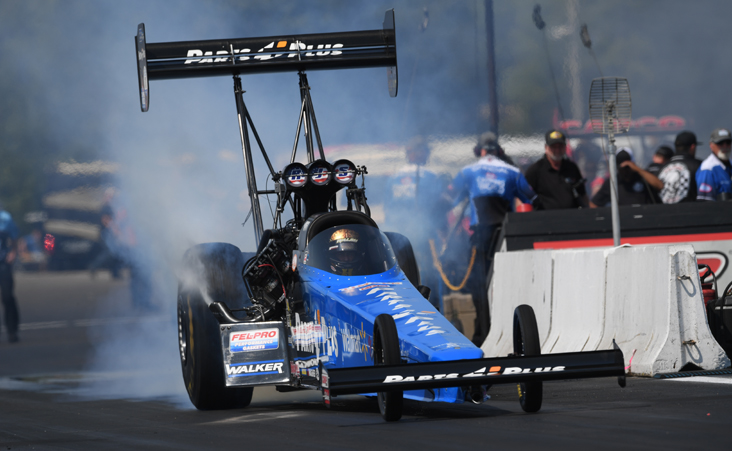 There’s nothing flashy about Clay Millican and the Straight Line Performance/Parts Plus team, but somehow, they always seem to find a way to get the job done. A single-car outfit that knows how to operate within their means, Millican’s team has now been to the last two final rounds, and since Denver, they’ve climbed from No. 11 to No. 7 in the Camping World Top Fuel standings, securing their spot in the playoffs.

The fact that Millican is winning rounds is one thing, but the manner in which he’s winning is perhaps even impressive. Crew chief Mike Kloeber has made all the right calls lately in both qualifying and Sunday’s eliminations. In Topeka, Millican was the No. 6 qualifier and toppled Doug Kalitta, Mike Salinas, and Shawn Langdon before dropping a tough race against Brittany Force in the final.

The momentum from Topeka carried over to Brainerd, where Millican used another string of 3.7-second runs to reach the final, where his 3.729 fell just short against Steve Torrence’s 3.712 in one of the best drag races of the season. The bottom line here is that the Parts Plus car is not only quick, but it’s beginning to do it with more consistency. That must be a comforting feeling heading into the biggest event of the season in Indy and the Countdown. 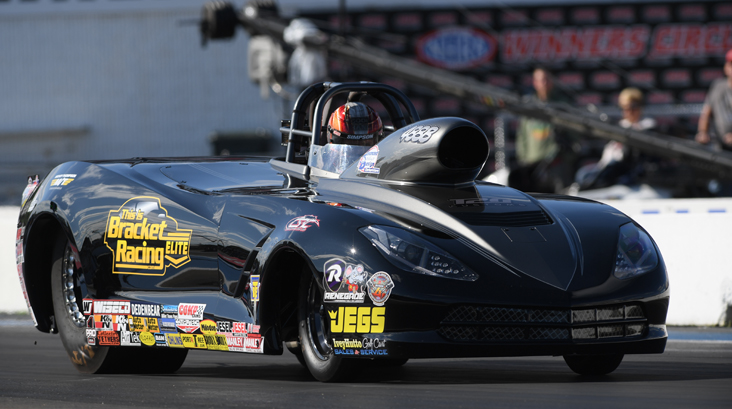 If you think Steve Torrence is having a great year in Top Fuel, wait until you see what Super Gas racer and National Dragster columnist Luke Bogacki has done. Bogacki won the Lucas Oil Nationals, and more importantly, he’s all but clinched the Lucas Oil Super Gas championship.

Already a two-time world champion, Bogacki raced in the Division 5 event held on Wednesday and Thursday and reached the semifinals. He then went the distance on Sunday, winning the final round against Dale Evens. Bogacki now has four wins in six final rounds this season, and he’s crested the 700-point plateau with 702 points. As a matter of record, no NHRA Sportsman driver has ever scored 700 points and not won a championship (although current Stock champ once finished second with 698 points).

Technically, Bogacki doesn’t have the title locked up because there are plenty of races left in the season. It’s possible but extremely unlikely that a driver could start now and win enough races to pass him, but let’s be realistic here, that’s not likely to happen. Former champ John Labbous Jr., currently ranked No. 2, can still pass Bogacki. But in order to have a shot, he’d probably have to win three of the last four events where he can claim points.

Of course, Bogacki may not be done, either. He can still earn points at two national and two divisional races, and he’s “cleaning up” a round-three finish nationally and a semifinal on the divisional level. Bogacki could easily finish in the 740-750 point range, a place where few other than Peter Biondo have ever ventured. 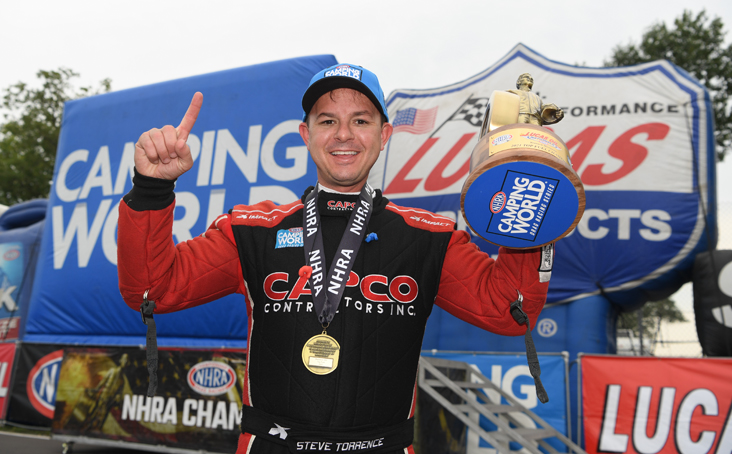 Shortly after winning his seventh race of the season and 47th of his career, Steve Torrence all but admitted that he was not at his best in Brainerd.

“I did everything possible to screw this up until the final, and I finally got my head out of my butt and drove my race car,” said Torrence after his final-round win over Clay Millican.

So, even on the days when they’re not dominating, the Capco Contractors team finds a way to get the job done, and that’s pretty unsettling news to any rival team that looks to break Torrence’s three-year lock on the Camping World Top Fuel title.

Torrence was undoubtably referring to the tardy .132 reaction time he had in the second round. Against quick-leaving Justin Ashley, that’s normally a recipe for disaster, but Torrence pulled off the win via brute horsepower, with his 3.73 outrunning Ashley’s 3.91. That win was huge since it gifted the Capco team a semifinal bye run, and they got down to business with a 3.69 that helped set up their final-round win over Millican.

Not that it matters much, but Torrence has extended his lead in the Camping World standings to a whopping 383 points over second-ranked Brittany Force. He knows that the bulk of that will evaporate during the Countdown reset, but that does little to diminish the chances for a fourth straight title. 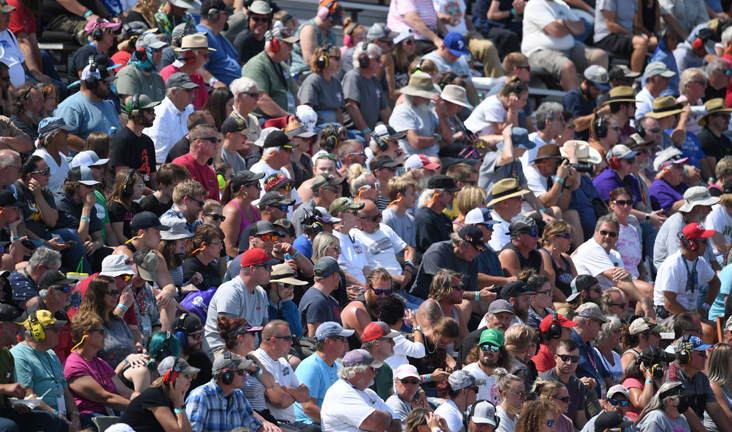 Sadly, the 2020 edition of the Lucas Oil NHRA Nationals was a COVID-19 casualty, but fans in the upper Midwest returned en masse to Brainerd Int’l Raceway for this year’s event. For Friday and Saturday’s qualifying and Sunday’s final eliminations, fans filled the stands and the pit area, taking time to interact with their favorite NHRA Camping World Series pros.

For those who have never been to Brainerd, the track offers an experience unlike any other on the NHRA tour. One of the biggest facilities in the sport, it’s home to an enormous camping area affectionately known as the Brainerd Zoo. The Zoo is an experience in itself, and this year’s version did not disappoint with some of the sport’s most colorful and enthusiastic fans coming out to support the sport.