The Dodge//SRT NHRA Nationals presented by Pennzoil was the second to last race of the season, and even though it’s the 19th of 20 events and the 1,000th in NHRA history, we’re still learning things — or being reminded of things — after a great weekend at The Strip at Las Vegas Motor Speedway. Here are five things we observed.
01 Nov 2021
Phil Burgess, NHRA National Dragster Editor
Feature

The Dodge//SRT NHRA Nationals presented by Pennzoil was the second to last race of the season, and even though it’s the 19th of 20 events and the 1,000th in NHRA history, we’re still learning things — or being reminded of things — after a great weekend at The Strip at Las Vegas Motor Speedway. Here are five things we observed.

STRATEGY WORKS, TO A POINT 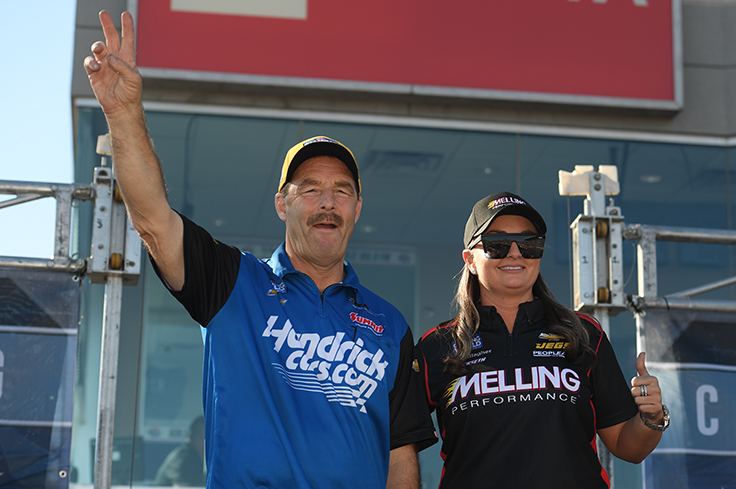 Credit to the Elite Motorsports team for being able to deftly manipulate the Pro Stock ladder to gain an Elite vs. Greg Anderson first-round matchup that went according to script when Troy Coughlin Jr. took down the points leader by a thousandth of a second.

Elite drivers Coughlin, Aaron Stanfield, and Cristian Cuadra all shut off early on their qualifying passes to lock down the last three positions in the field — spots 14, 15, and 16 — correctly assuming that Anderson would be one of the top three and ensure a first-round date.

That’s all fair and well, as Anderson had tried and succeeded at the same tactic at the Auto Club NHRA Finals in 2019 and got his desired matchup with Enders, only to have the plan backfire when she beat him in the opening stanza.

Curiously, Anderson entered the final session No. 2 and made the strategic decision to go to No. 1, switching his first-round opponent from the relatively inexperienced Cuadra to the shark that is Coughlin. Anderson said that the three bonus points he would get for running low e.t. of the session were worth it. He might want to rethink that.

Coughlin’s victory over Anderson ultimately gave him a semifinal race with his points-hungry teammate Enders and, despite her post-race proclamation that no team orders were in place, many looked askance when Coughlin lifted early against her in what was a neck-and-neck race.

Enders wasn’t able to take maximum advantage of Anderson's early out after Anderson’s KB Racing teammate, “Double-0 Dallas” Glenn was .001 against her in the final and outpowered her, too, to allow Anderson to keep a slim lead heading into the season finale in Pomona. 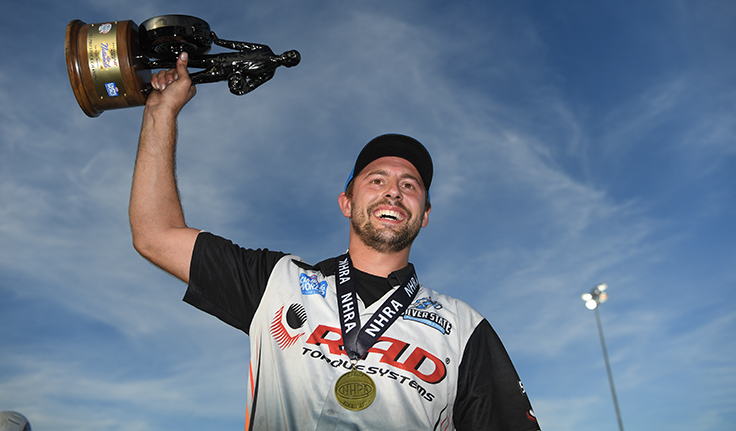 Most of the voters for the NHRA Rookie of the Year had been straddling the fence between Glenn and Top Fuel freshman Josh Hart as both had recorded two victories this season. Glenn did have the extra credits to his ledger of making the Countdown to the Championship (largely because he ran a full season and Hart did not) and two runner-ups, but Glenn’s win in Las Vegas may have finally tipped the scales his way, though some of the media voters may have already cast their ballots before the event. The winner will be announced at the awards ceremony at the track Sunday evening.

FUNNY THINGS CAN HAPPEN (AND USUALLY WILL) 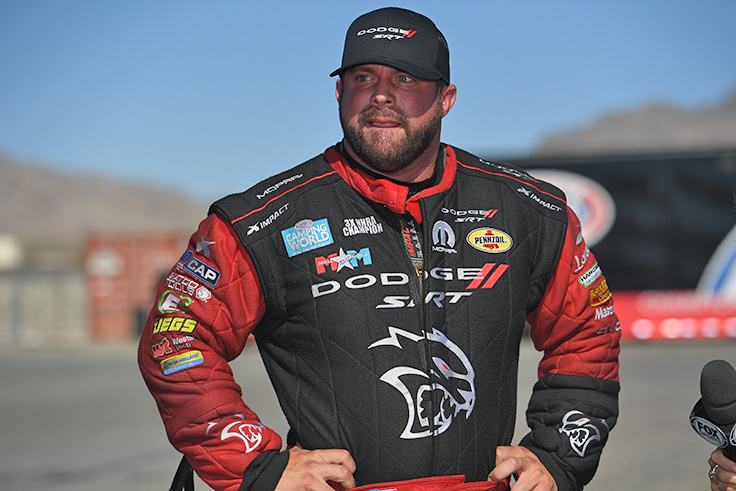 The first-round massacre of Funny Car championship frontrunners Matt Hagan, J.R. Todd, and John Force in back-to-back-to-back races left jaws on the ground and reinforced the old saying about “That’s why we don’t run them on paper.”

Many of the smaller teams know that an A-to-B first-round lap — nothing fancy, nothing fast — can get the job done when the bigger teams, gunning for lane choice for round two, occasionally stumble.

Force’s engine inexplicably quit 200 feet into a winnable race against newcomer Chris Morel, Todd went up in smoke, as he did in Q3 after two 3.9-second passes, against No. 14 qualifier Paul Lee, and Hagan dropped a cylinder against Chad Green. For both Morel and Green, it was their first career round-wins in the class, and they couldn’t have come at a worse time for Force and Hagan. Per Bob Frey, the last time that the No. 13, 14, and 15 qualifiers all won in the first round was 2014 Toepka.

Like Anderson in Pro Stock, they all were spared a little bit of hurt when points leader Ron Capps was taken out by Cruz Pedregon in the final, but the damage was already done.

IT ALL COMES DOWN TO POMONA (AGAIN)

There was very little chance that any of the NHRA Camping World Drag Racing Series championships would be decided in Vegas (there was a small mathematical chance if the wheels had completely fallen off for the pursuers), so, once again, the championships will be decided in dramatic fashion at the Auto Club NHRA Finals in Pomona.

With the points-and-a-half structure at the Finals, there is a maximum of 187 points available (although 15 of those get gobbled up by anyone who makes a qualifying pass, successful or not), meaning that mathematically each class has at least three drivers still in the hunt: 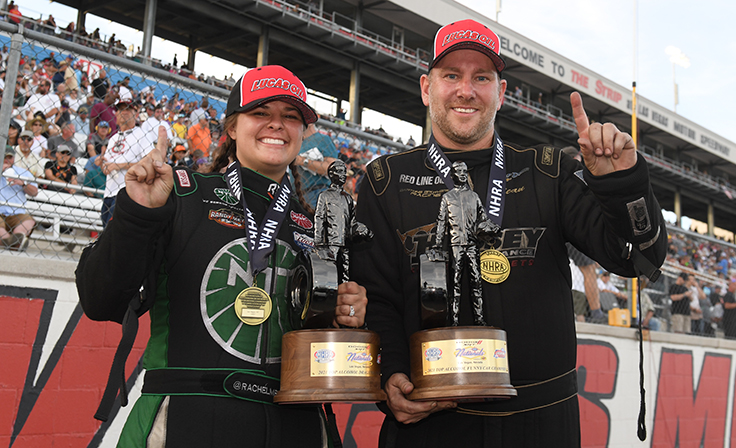 Three NHRA Lucas Oil Drag Racing Series championships were wrapped up in Las Vegas with titles going to Rachel Meyer (Top Alcohol Dragster), Sean Bellemeur (Top Alcohol Funny Car), and Bruno Massel Jr. (Comp). The titles were the third for both Bellemeur and Massel and the third straight for the Meyer family, as Rachel followed on the heels of older sister Megan’s two titles with one of her own.

Meyer won her championship in a dramatic winner-take-all final round with Jackie Fricke, and 2018-19 champ Bellemeur clinched his title by defeating Brian Hough in the final to lock out defending champ Doug Gordon (Bellemeur also had the chance to improve in Pomona if he didn’t get it done in Vegas), and 2009 and 2012 champ Massel clinched his third crown just by reaching the final, then went on to win the race, too.