A near-capacity crowd at Bandimere Speedway witnessed one of the most thrilling NHRA Camping World Drag Racing Series events of this or any other season as the annual Western Swing kicked off in Denver.
20 Jul 2021
Kevin McKenna, NHRA National Dragster Senior Editor
Feature

A near-capacity crowd at Bandimere Speedway witnessed one of the most thrilling NHRA Camping World Drag Racing Series events of this or any other season as the annual Western Swing kicked off in Denver.

The 2020 NHRA Camping World Series event at Denver’s Bandimere Speedway was lost due to COVID-19, but this year’s edition of the Dodge//SRT Mile-High Nationals presented by Pennzoil, the annual kick-off of the three-race Western Swing, did much to make up for lost time.

A truly packed house got to see two rounds of nighttime qualifying on Friday and Saturday followed by a thrilling conclusion to Sunday’s final eliminations with a lot of drama, a few surprises, and a couple of not-so-surprising winners crowned. Here are five things we learned from the event:

THE CAPCO CONTRACTORS TEAM OPERATES AT A DIFFERENT LEVEL 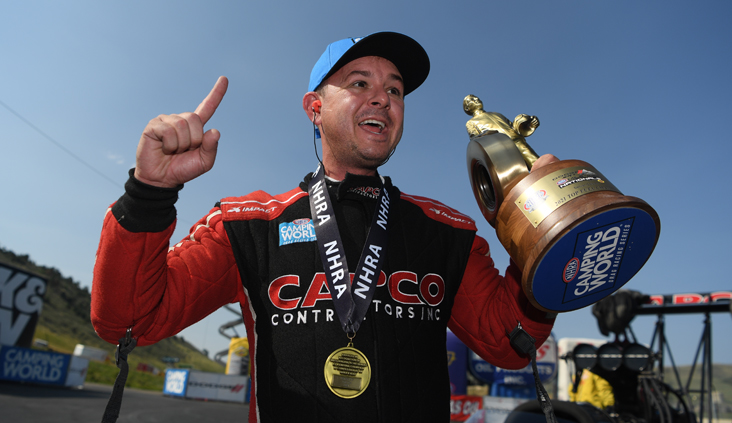 None of this should be shocking because he’s dominated the class for the last three seasons, but what Steve Torrence and the Capco Contractors team are doing in the Top Fuel class is nonetheless remarkable. In a class that is loaded with talent, including both drivers and crew chiefs, the Capco crew often appears to be playing chess while the rest are playing checkers.

Case in point: Friday’s opening qualifying session, held under the lights and in front of a huge crowd, presented a huge challenge for NHRA’s nitro teams, especially in Top Fuel, and most of them got it wrong. Time after time, dragsters either smoked or shook the tires, leading to an early shutoff. By the time Torrence staged in the final pair of the evening, the elapsed time to beat was Joey Haas’ 4.05. What did Torrence do? Ripped off a 3.778 to gap the field by a wide margin.

Even though Torrence was eventually bumped to the No. 2 spot by Brittany Force's otherworldly 3.71, his qualifying performance showed once again that crew chief Richard Hogan, Bobby Lagana, and the rest of the Capco crew have the ability to adapt to almost any conditions.

To no one’s surprise, Torrence ran the table on Sunday to win his 45th career Top Fuel race and fifth this season in just eight races. He’s now 24-3 this year in round-wins and has a lead so large that he could most likely take the rest of the Western Swing off and still arrive in Topeka as the championship leader.

THERE IS STILL ROOM IN THIS SPORT FOR THE LITTLE GUY 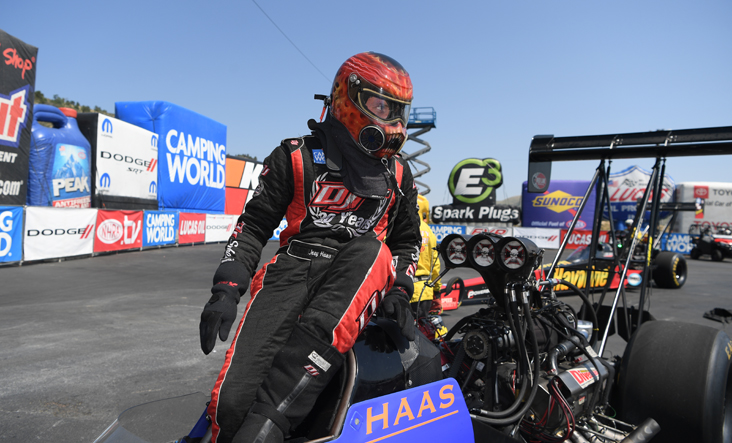 Let’s be honest here. A week ago most NHRA fans had probably never heard of Joey Haas, but his drive to the Top Fuel final should serve as a formal introduction and an impressive one at that. Appearing in just his third NHRA Camping World Series event, the former Nostalgia Series driver wheeled Terry Totten’s dragster to a respectable 4.05 on Friday night that was good for the No. 7 spot.

On Sunday, Haas made the Denver fans take notice when he went to the final round. Haas outran Top Fuel newcomer Alex Laughlin and then got a single run when Leah Pruett’s Dodge dragster was shut off on the starting line. Haas later beat Clay Millican to reach the final round. Millican’s car shut off due to a parts malfunction, and Haas got the win despite shucking a blower belt well before the finish line.

The clock struck midnight on Haas’ Cinderella story when he lost to Torrence in the final, but he did keep the Capco team honest with a respectable 4.14.

The kicker here is that the Totten team managed to make all four runs on Sunday and never once removed the cylinder heads. That sort of maintenance (or lack thereof) is unheard of in today’s nitro racing, where parts are routinely trashed well before the end of their life cycle. With the help of Scott Palmer’s crew, the Totten team did pull the crankshaft and change engine bearings before the final, but it’s almost a given that their parts bill for the weekend was a fraction of other teams. 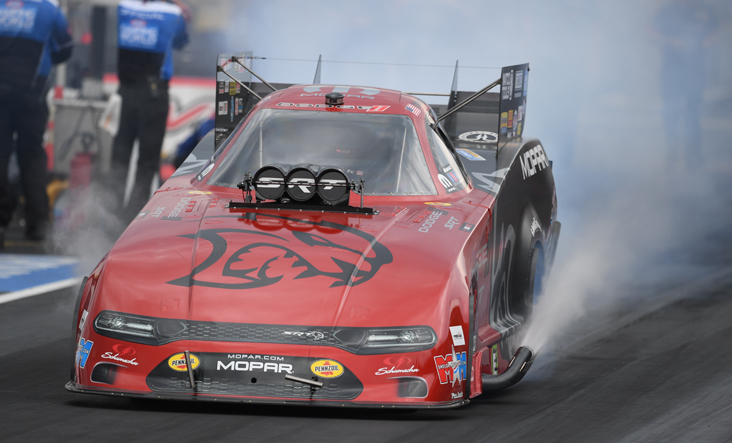 So far this season, there have been eight races in Funny Car and six different drivers have left with a Wally. As a quick reminder, J.R. Todd won in Gainesville, and Bob Tasca III has wins in Las Vegas and Atlanta. John Force also has two wins in Charlotte and Epping, and teammate Robert Hight got on the board at the rain-delayed event in Houston. Finally, Cruz Pedregon earned a long-overdue win a couple of weeks ago in Norwalk.

It shouldn’t have been the least bit surprising to see another new winner crowned in Denver after Dodge-backed Matt Hagan earned the title at his sponsor’s event. Hagan is part of the Don Schumacher team that won every Funny Car race last season but was somehow shut out for the first third of the 2021 campaign. Hagan has long wanted to win on the mountain and got the job done with a string of low 4.0 runs on Sunday.

With six winners in eight events, it is almost impossible to predict who is going to win a given event, and that represents the sort of parity that most fans want to see. It’s not unreasonable to think that number could swell to nine or 10 by the end of the season because Ron Capps is still winless and so is Denver runner-up Alexis DeJoria as well as Tim Wilkerson, who seems to bring his best week after week. As long as we’re naming names, what about Blake Alexander? Paul Lee? Or even Terry Haddock, who went to the semifinals in Epping?

And, given all the crazy things that seem to have happened lately, would anyone really be shocked to see a part-timer such as Chad Green, Bobby Bode, or Mike McIntire somehow get the job done? Stranger things have certainly happened.

ALEX LAUGHLIN CAN DRIVE ALMOST ANYTHING 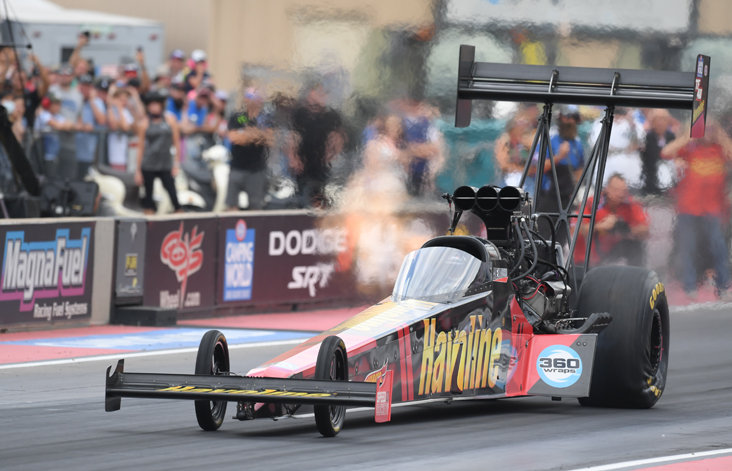 Okay, he admits that he’ll never even try to ride a Pro Stock Motorcycle but otherwise, Alex Laughlin is perhaps drag racing’s most versatile wheelman, and in Denver, he took to the Top Fuel class like a duck to water.

For those who might not have heard, Laughlin found himself in a bind heading into Denver. Since Pro Stock was not contested and the Elite team elected to park their Pro Mod operation for the weekend, he found himself with no ride for the weekend. That represented a significant problem because he had sponsor commitments that needed to be honored.

Enter Scott Palmer, who generously allowed Laughlin to not only license in his Top Fuel dragster but also gave up his own entry for the Mile-High Nationals to devote as much time as possible to his new student. Laughlin completed his license upgrade on Monday and went on to qualify for the Denver field with a very respectable 3.900 at more than 316 mph.

Even though Laughlin smoked the tires in the first round and lost to eventual runner-up Joey Haas, his performance was so impressive that the entire Palmer team was awarded the NHRA Never Rest award for their perseverance.

As for Laughlin, he’s now raced in Pro Stock, Pro Mod, Top Alcohol Dragster, and Top Fuel with varying degrees of success. He’s expected to be back in a Pro Stock car for the upcoming races in Sonoma and Pomona, but after that, he admits his future is very much up in the air. That being said, he’s almost certainly not made his last appearance in a Top Fuel dragster.

THE FANS IN DENVER ENJOY THEIR NHRA DRAG RACING 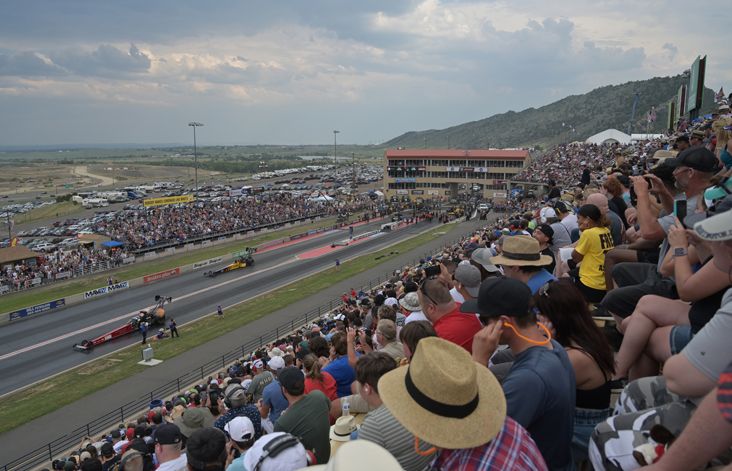 When it comes to drawing a crowd, the Dodge//SRT NHRA Mile-High Nationals rarely disappoints due in large part to the dedication of the Bandimere family, which has operated the picturesque facility for more than six decades. This year’s event, however, was something very different and very special. Long before the start of Friday’s 8 p.m. Pro qualifying session, the stands were packed and the pit area jammed with fans who were clearly longing for their nitro fix after last year’s event had to be postponed.

As it turns out, Friday was just the warm-up act for the truly massive gathering that occurred on Saturday with just about every seat filled, and a huge crowd gathered at the fences. Sunday’s crowd was also robust in a clear sign that the NHRA Camping World Drag Racing Series is back after a year that can only be described as challenging.

Another note about the Denver fans, they stayed late into the evening on Saturday in order to watch the jet dragsters close out the show, and they also intently watched Sunday’s NHRA Lucas Oil Drag Racing Series Sportsman final rounds, cheering on the thrilling Factory Stock final between Stephen Bell and Leah Pruett, as well as the father-daughter winner’s circle shared by Comp winner Joe Mozeris and his daughter, Kayla, who won in Super Stock.