Five things we learned at the DeWalt NHRA Carolina Nationals

Ask someone to pick the winners after qualifying on Saturday at zMAX Dragway and odds are they would have gotten each one wrong on Sunday at the DeWalt NHRA Carolina Nationals.
20 Sep 2021
Josh Hachat
Feature

Ask someone to pick the winners after qualifying on Saturday at zMAX Dragway and odds are they would have gotten each one wrong at the DeWalt NHRA Carolina Nationals.

That’s a nod to the unpredictability of the sport, and that was in full effect on Sunday in Charlotte. The favorites went down in surprising fashion, and the ensuing drama was beautiful to watch at the second race of the NHRA Countdown to the Championship.

Here’s five things we learned from zMAX Dragway, which also marked the third race in a rigorous stretch of four straight race weekends: 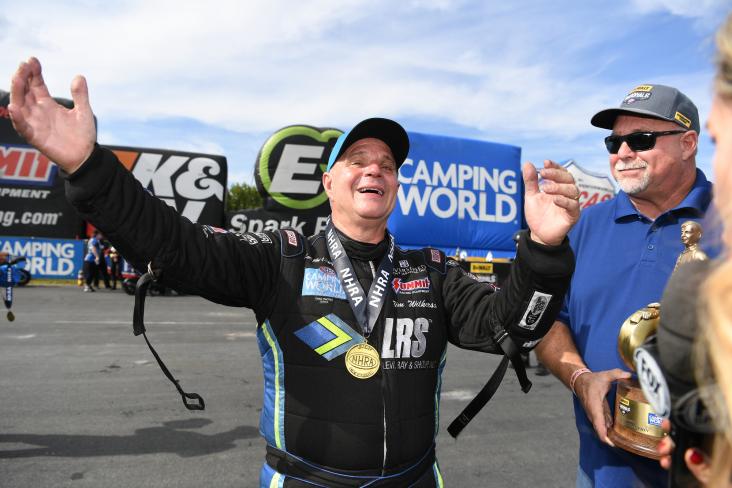 Wilkerson has always enjoyed making life miserable for the big teams in Funny Car, but he’s been particularly needling the past few weeks.

He’s not about to talk championships right now — and in a tie for sixth place, he would have to stay red-hot to do so — but Wilkerson is having a major say in the title race. In Charlotte, he took out Bob Tasca III in the first round, putting his championship chances on life support, John Force, Ron Capps, and Cruz Pedregon, which is oddly enough the same foursome he knocked off in Indy at the U.S. Nationals. More importantly, all four are playoff contenders, and Wilkerson ensured the points leader would change hands yet again.

It’s good to see Wilkerson enjoying this after a particularly brutal stretch for him earlier this summer, and with the way his car and team are performing, it might not be stopping anytime soon, especially as he visits his hometrack stomping grounds this weekend in St. Louis.

THE ROOKIE OF THE YEAR RACE MAY STILL BE WIDE OPEN 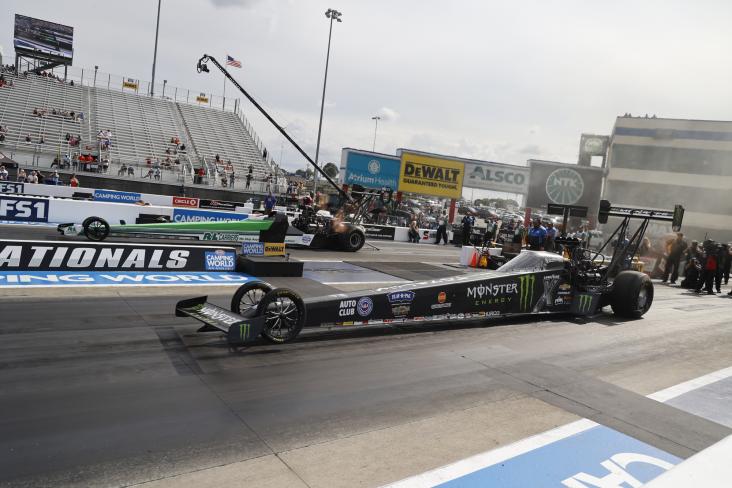 It’s a major feat if an NHRA Rookie of the Year contender can capture a victory in their debut season in the NHRA. This year, though, it may take THREE victories to win the award.

In a fitting sign of the influx of talented, younger drivers that have entered the sport in recent seasons, rookie Top Fuel driver Josh Hart and Dallas Glenn both have two victories this season. While Hart missed a handful of races over the summer, Glenn was busy building an impressive campaign in Pro Stock, winning in Topeka to take command in the NHRA Rookie of the Year race.

Hart, though, answered back this past weekend by winning in Charlotte, taking down Brittany Force’s rocketship in the final round on a holeshot. That gives Hart two wins in his first eight nitro starts, and we’ve got ourselves a discussion for the top rookie in 2021 again. Does this become a “first to three gets the award” over the final handful of races? Either way, both have been tremendous and puts the sport in a terrific place moving forward. 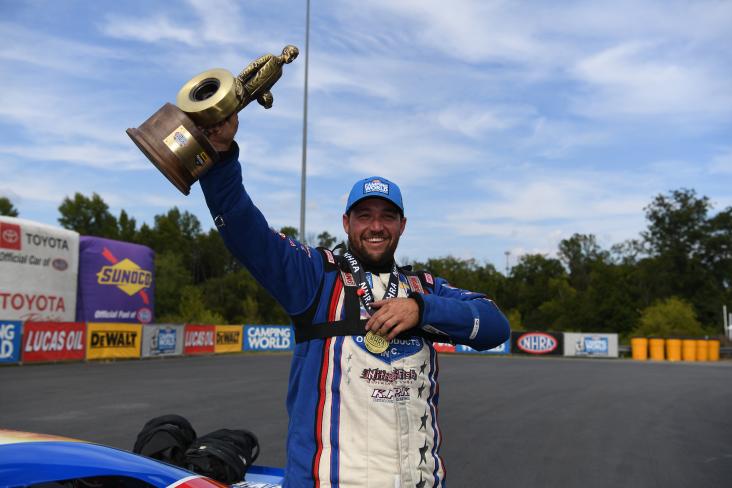 That was the case in 2021, as Glenn and Kyle Koretsky both captured their first career Pro Stock victories at the Bellagio of dragstrips.

Both did it in stunning fashion, too, as Glenn won the four-wide event in just his fourth career race, and Koretsky outran points leader Greg Anderson in a thriller of a final round on Sunday.

Koretsky had been knocking on the door, coming up agonizingly short at the U.S. Nationals, and he’s proven to be a star in the making in the class. Seeing how much the victory meant to him made it that much sweeter, but it may also mean that Charlotte is the perfect place for Pro Stock drivers seeking their first win.

The likes of Mason McGaha, Troy Coughlin Jr., and the Cuadra brothers could be waiting to see if that holds true in 2022. 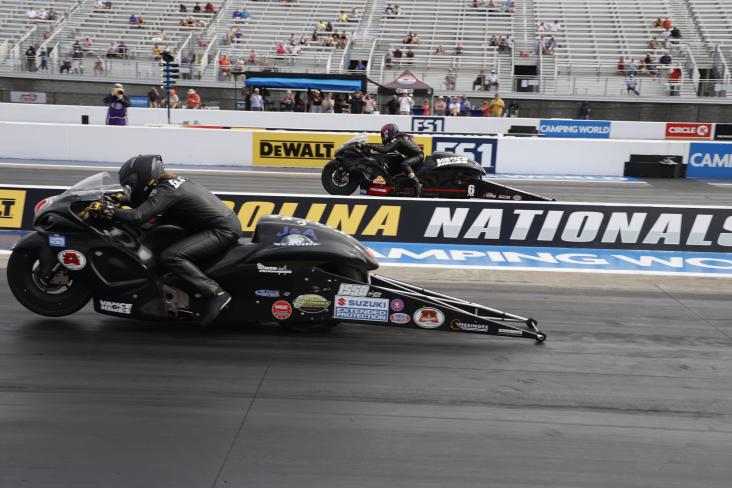 Angelle Sampey was the first to admit she had no business winning in the final round with a reaction time of .113, but after coming up short in agonizing fashion lately, Sunday was simply her day to finally collect on some good fortune.

On a particularly gut-wrenching day in the class, Sampey ran down Gladstone at the finish line when his kill switch came unplugged. With everyone shifting their thoughts to Cory Reed following his wreck in the second round of eliminations, Gladstone, Sampey, and the rest of the competitors gutted out the day.

Gladstone, who races with Reed and is one of his close friends, winning his first race would have been a compelling story, but Sampey’s first win of the season also had a heartfelt meaning. The Louisiana native dedicated the win to those still suffering from the aftermath of Hurricane Ida, and it’s a win Sampey has been pushing for with that reason in mind for the past three races. 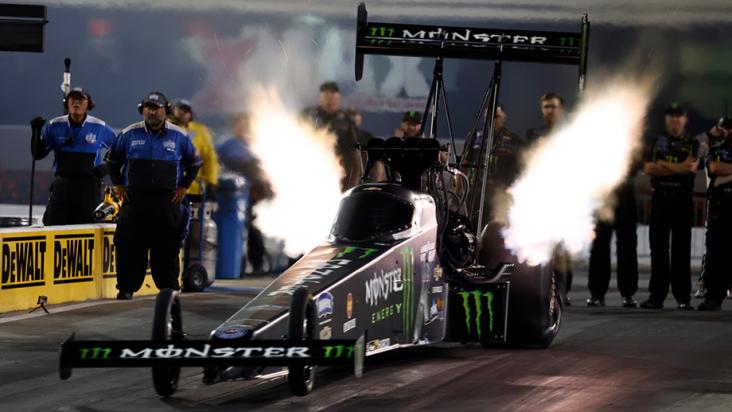 Instead of anything becoming decisive at the second race of the Countdown to the Championship, the championship picture became a lot more muddled in every class.

It changed hands in Top Fuel, as Force’s remarkable run in qualifying — where she’s made the quickest run in each of the six overall qualifying sessions through two races — now has her ahead of Steve Torrence.

In Funny Car, the points lead changed hands for the seventh straight race. Capps now has it for the third different time since August, and nobody has been able to keep it for more than one race since mid-July. Does that change in St. Louis? Based on recent history and Funny Car’s ongoing game of hot potato — as well as Matt Hagan and John Force trailing by just five and 25 points, respectively — all signs point to doubtful.

Anderson stretched his lead over Erica Enders to 65, but Koretsky gave himself a puncher’s chance with the win, and Pro Stock Motorcycle got real interesting. Three riders — Sampey, Matt Smith, and Eddie Krawiec — are within 39 points of Steve Johnson, and with the class taking St. Louis off, there’s a little more time for each to think about just how tight things are in the two-wheeled category.