Every season starts with some great expectations and all eyes on potential firsts and milestones. We didn’t have to wait long to get the sport’s newest first-time Pro winner after Josh Hart won Top Fuel in his debut in Gainesville, but there's still plenty of other big moments looming on history's horizon.
08 Apr 2021
Phil Burgess, NHRA National Dragster Editor
Feature

Every season starts with some great expectations and all eyes on potential firsts and milestones. We didn’t have to wait long to get the sport’s newest first-time Pro winner after Josh Hart won Top Fuel in his debut at the season-opening Amalie Motor Oil NHRA Gatornationals, and we’ve previously explored who could be next on the list of first-time winners, but there's still plenty of other big moments looming on history's horizon. 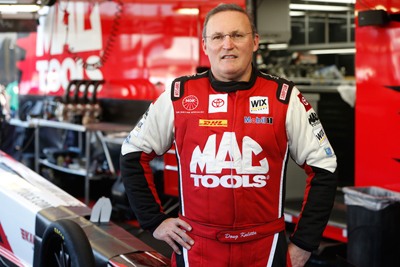 Obviously, this is a lot harder of a pick than a first-time event winner. After crowning three first-time champs in 2018 (Steve Torrence, J.R. Todd, and Tanner Gray), the 2019 and 2020 titlists were all repeaters — so who has the best shot at breaking through for a first world championship in 2021?

Could this be Doug Kalitta’s year in Top Fuel? We ask that question every year just because he’s been so close so many times, but it’s way overdue, and if anyone can break the Steve Torrence stranglehold, it’s him. Kalitta finished second in 2019 and 2020 for his fifth and sixth championship runner-ups. The veteran driver, whose 525 career starts are the most in class history, would love to close all the gaps in his otherwise sterling résumé.

Leah Pruett also seems well overdue, Clay Millican is a proven champ, and we know that Mike Salinas has Alan Johnson in his corner. 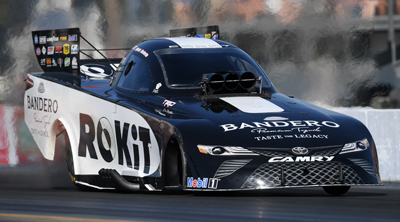 Related to the above, Alexis DeJoria not only could become the next first-time world champ but a title for the Funny Car veteran would complete the circle of female champions in the NHRA Camping World Drag Racing Series classes. We’ve had female champions in Top Fuel (Shirley Muldowney and Brittany Force), in Pro Stock (Erica Enders), and Pro Stock Motorcycle (Angelle Sampey), but Funny Car has been the outlier despite potential-filled seasons for sisters Ashley Force (who finished second in 2009) and Courtney Force (third in 2017).

After the way DeJoria and crew chiefs Del Worsham and Nicky Boninfante closed 2020, is it too soon to be thinking about her championship prospects? And if not DeJoria, is it finally Tim Wilkerson’s turn? Or Bob Tasca III? 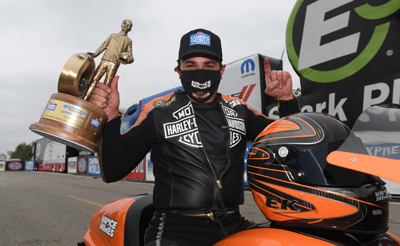 Robert Hight in Funny Car and Andrew Hines in Pro Stock Motorcycle became the 19th and 20th drivers to reach the 50-win milestone in 2019, and there are several more within striking distance in 2021.

Kalitta nailed down two wins in the shortened 2020 season to boost his total to 49, so there’s little doubt in my mind that he’ll reach the 50-win plateau. Eddie Krawiec’s late-season Pro Stock Motorcycle win in Houston boosted his total to 48, but his uncertain schedule this year makes him a question mark to reach 50 this year. Sportsman ace Jeff Taylor has 48 victories and could easily get to 50 this year. Fellow Sportsman-racing star Edmond Richardson is also at 48 but is not as active as he once was and, consequently, remains winless since 2014.

Steve Torrence is up to 44 wins, and we all know that six wins in a season is well within reach of “Dem Capco boys.”

FLETCHER COULD MOVE TO SECOND ALL-TIME

After going winless in the last two seasons, Sportsman superstar Dan Fletcher is still sitting on 104 wins and could tie or pass Frank Manzo’s 105 career wins to take over second place behind John Force on NHRA’s all-time wins list. He'll likely never catch Force (nor likely will anyone), but second place probably looks pretty good to him.

Although the NHRA Camping World Drag Racing Series schedule remains an ever-shifting target due to various reasons, NHRA is on target to stage its 1,000 national event sometime late this season. NHRA’s first national event was staged in Great Bend, Kan., in 1955, and, depending on how the season falls, the 1,000th will happen in either Dallas or the fall Las Vegas event.