Fan perspective: 70 reasons why NHRA Drag Racing is the best sport on earth

Lou Santini is a comedian, TV and event host, writer, voice actor, broadcaster, and huge NHRA fan. Follow long as he offers his own NHRA 70th anniversary salute with his 70 reasons why NHRA drag racing is great.
29 Jun 2021
Posted by NHRA.com staff
Feature 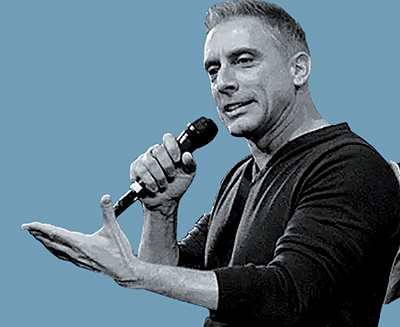 I attended my first drag races with my dad at Dragway 42 in Salem, Ohio, when I was 10 years old. Our first-row bleacher seats were about 50 feet from the starting line, putting us close at racers’ level.

Top Fuel hadn’t hit 300 mph yet, but dragsters were plenty fast and loud, as I was privileged to see “Big Daddy” Don Garlits, Don “The Snake” Prudhomme, and Shirley Muldowney, my all-time favorite person and hero in all of sports.

During a rain delay, I stood in line to get Muldowney’s autograph amongst a few dozen kids. I was next in line, and as the sun began to poke through, you guessed it — they called the next Top Fuel round to the staging area.

I can only imagine the hangdog, pouty, lower lip-protruding mug I had on when Muldowney approached me and said, “Honey, would you like to help me push my car to the track?” The look of envy of the other kids had me walking tall, and I remember barely putting the tip of my index finger on some part of the car, not really “helping” but still feeling special. I still get choked up thinking about it. I’ve loved drag racing ever since.

Having received my latest copy of the newly revamped NHRA National Dragster and seeing the cover banner: “Celebrating 70 Years of Championship Drag Racing,” I was inspired to compile this list: “70 reasons why NHRA Drag Racing is the best sport on earth.”

These reasons came to me faster than an Erica Enders reaction time and are not in any particular order, except for the first three. Enjoy!

2. The sound. I’ve taken six friends to the drag races over the years, and they all expressed the sentiment: “You can describe it all day, but until you’re there and you really hear it…” They used words and phrases like, “It’s like nothing else” and “I still can’t believe how loud it is” and “Why didn’t I do this sooner?”

3. The sights. I defy you to find a more visually pleasing sport. It’s a colorful feast with the smoke, the flashy colors on the cars, the sponsor decals. No joke: NHRA on FOX is the reason I bought a bigger, better OLED TV. Worth it. (You’re welcome, Sales and Marketing). 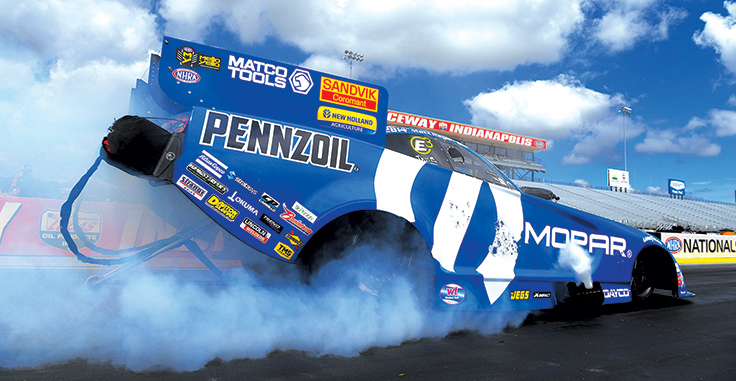 4. The Burnouts. Sure, they’re not as long as they used to be, but it never gets old. You know it’s coming, and it’s awesome every time.

5. The two greatest words in the history of the English language ever smashed together: Top. Fuel. If God drives a car, it’s Top Fuel. 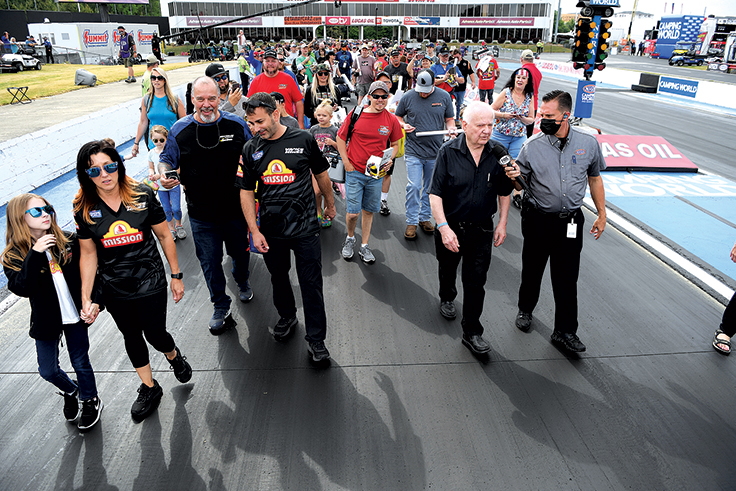 6. Track Walks. I’ve done it once, and it lived up to the hype. The reverence you see in the fans’ faces as they bump elbows with living legends makes for a great morning.

8. It’s not “man versus machine” but “man working with machine.”

9. “Pedalfests!” Some of the most exciting races I’ve seen had nothing to do with who had the best reaction time or fastest speeds.

11. The NHRA slogan: Speed for All. That’s badass.

12. Jet cars. I remember seeing my first one at Dragway 42 after a rain delay was over, and they brought out “Shockwave” to make sure the track was 100% dry. Trust me, after one pass, we were back to racing. The car was at the finish line, and I could feel the heat wash over me.

14. National Dragster, especially now with the revamp. Every issue is collectible. In a day and age when printed magazines are dying, ND upped their game.

15. Hearing Pro Stock racers go from a rumbling idle to “Is it going to explode?” high rpm in an instant at the starting line just before the green. 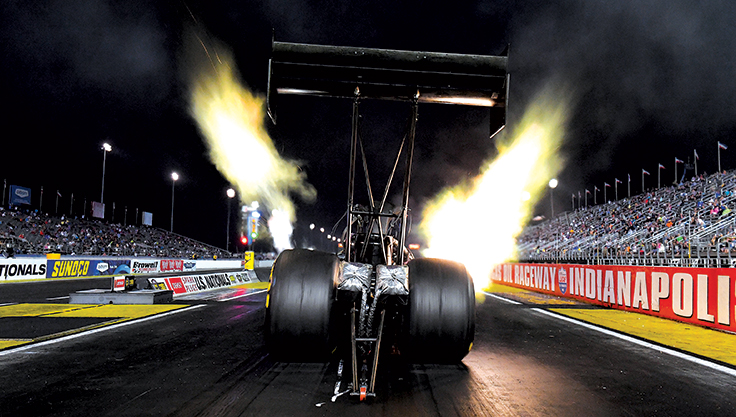 17. Affordability. Attending a race won’t break the bank for a family of four.

18. At an NHRA track, there are no bad seats in the house. 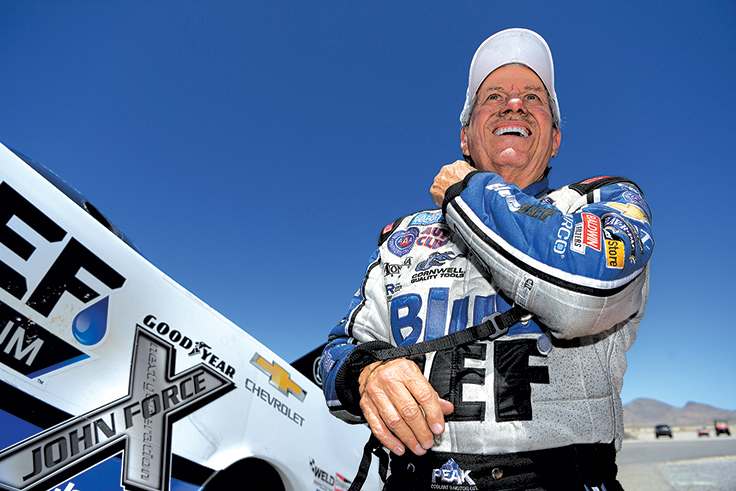 19. John Force. Living legend and easily the coolest name in all of motorsports. No file clerk is named “John Force.” (No offense to file clerks.)

20. And speaking of which, many drag racers just seem to have cool names. When your name is John Force, Bo Butner, Cruz Pedregon, Jack Beckman, Jeg Coughlin, Antron Brown, or Robert Hight, it’s like it was their destiny. Give us mortals a chance.

21. Seeing the childlike excitement in even the most veteran drivers. I’ll never forget seeing Bo Butner win a race, and I want to say it wasn’t even a final, but it was a good battle. He won. And at the end of the interview, he was visibly watering up as he expressed sentiments of how lucky he was, and he simply ended the interview with a slight quiver in his voice, “Let’s race.” Damn, if I don’t tear up typing that.

22. The fan appreciation. See: This article. No one asked me to write it. 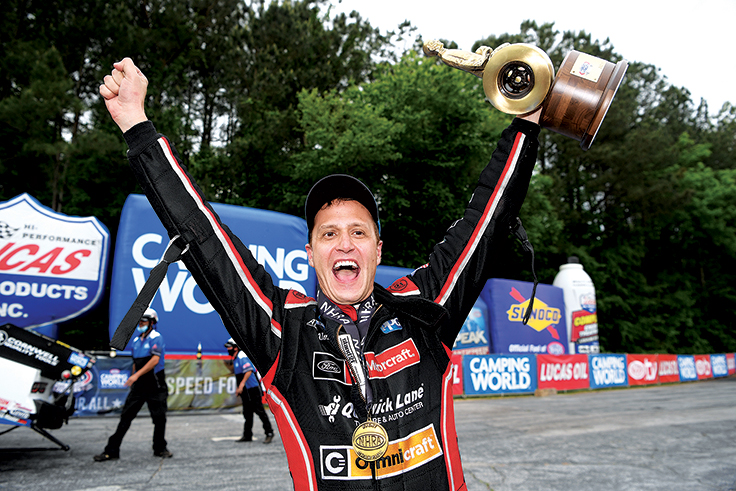 23. The passion of the drivers and their crews.

24. Brian Lohnes on FS1 is the perfect play-by-play broadcaster for the sport: knowledgeable, passionate, human, with a hint of “fan” leaking out while remaining objective.

26. The “NHRA 101” segments on FS1. Expertly and concisely written and presented; always interesting.

27. If you’re at the track early, the sound of that first car firing up in the morning. Who needs coffee?

28. Speaking of mornings at the track, it’s the only day(s) of the year that I’m having a beer and a hot dog at 8 a.m. and feeling good about my choice.

30. The perks and good customer service of being an NHRA Member.

31. Getting your NHRA membership pack in the mail every year.

32. The Safety Safari. A thankless, yet important job, and without them 70 years ago, we’re not watching it on TV now.

34. The difference that track temperature, altitude, humidity, wind, air temperature, barometric pressure, lane choice, clutch adjustments, tuning, etc., make in race strategy and can be the difference between winning and losing. Oh, and let’s not forget your opponent. And your own mental and emotional focus. These are the things I tell some amateur who says, “How hard could it be? Driving in a straight line.” Have at it, Hoss. Two words: Pro Stock.

35. The strategy of deep staging. 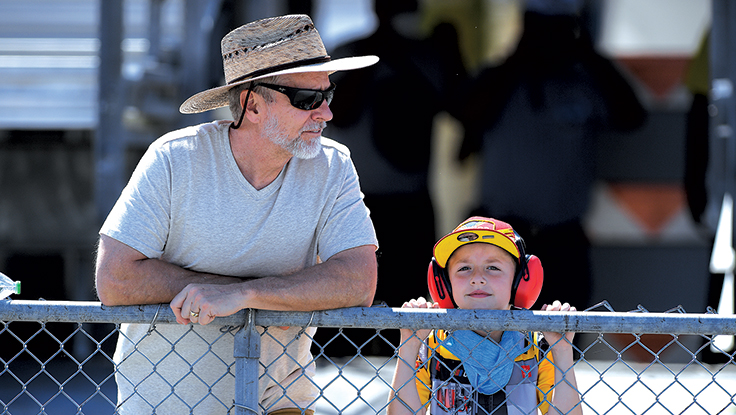 36. How drag racing often becomes a family affair passed down from generation to generation.

37. Family member versus family member races. Or spouse versus spouse! To be a fly on the wall on that ride home. I thought I sucked at dating before — racing against my wife or girlfriend? Pass.

39. The inherent patriotism for America in every aspect of each race day. 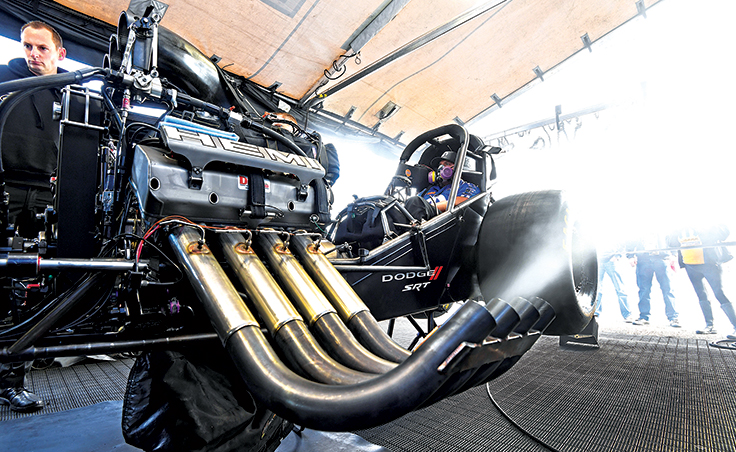 40. Being at the track and watching crowds gravitate toward pit crews that fire up their cars for testing.

41. The killer intros/montages FS1 puts together at the beginning of each televised event. The shots, the music, the slo-mo, the voiceover. It gets you pumped.

42. The excitement of getting an “old school” magazine like National Dragster in the mail. When was the last time you were excited about your mail?

44. The fact that I’ve met several of the drivers in the pits and none have disappointed with their time, courtesy, and appreciation. (However, when I meet Leah Pruett, my favorite driver in motorsports, I may be speechless for the first time. Respect.) 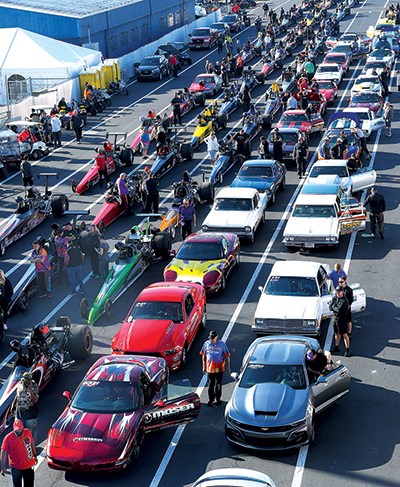 45. Every single car in every single category simply looks cool — fat tires, wrinkle walls, huge engines, flashy paint jobs, even on the lowest budget weekend racer’s. No two cars are the same, and you can see the pride in every car.

46. The heritage and respect for drag racing by the drivers that remains consistent every week.

47. It’s made for TV and shot well for television; jib-cam starting-line angles, close-ups, photo finishes, “from the cockpit” ride-alongs, even the camera work in the pits as crews thrash against the clock.

48. Watching pit crews work. If you turn off the sound on your TV and were playing orchestra music, you can see the choreography and precision.

49. Age, sex, and race have nothing to do with ability.

50. Wondering each week if another record will be broken. And then seeing it happen. 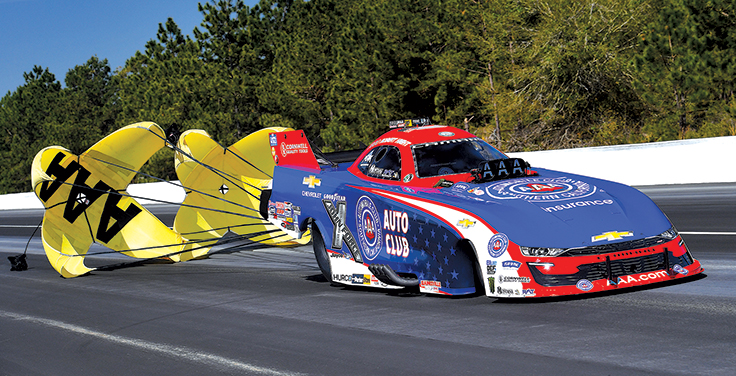 52. Cars so fast they require parachutes. So, there’s that.

53. The insanity of the idea of Top Fuel Harleys. No way those riders can get life insurance. 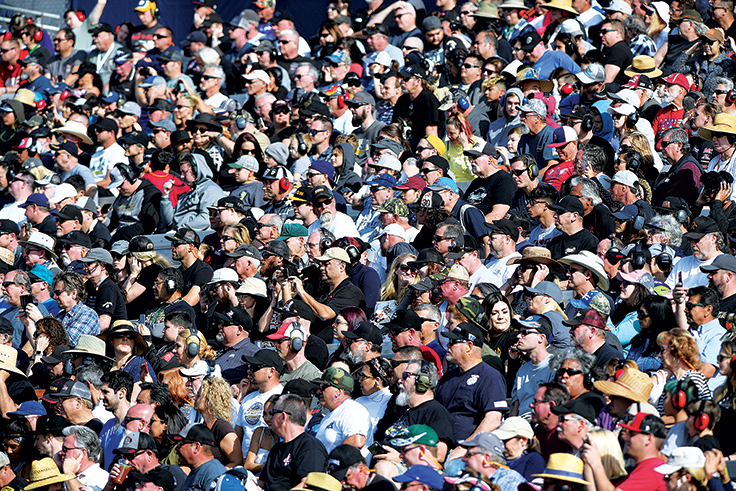 54. Seeing all ages in the stands and families that clearly span generations.

55. Cinderella stories. See most recently: Josh Hart winning his first final at his first attempt and the field he had to go through to get there.

56. To that point, the humility, sportsmanship, and humanity the drivers show by example week in and week out. Often, after an event win, the first words out of a driver’s mouth is an appreciation for the fans and sponsors at the finish line. No sense of entitlement in this sport.

57. Watching a driver walk away from a horrific crash and then minutes later almost always calmly describing what happened and, when able, getting right back in the car the next day or even the next race. I have a bad set on stage, and I contemplate my entire life choices.

58. Name a sport where a 5- or 6-year-old be on the same “playing surface” as the Pros on the same day. Jr. Dragsters racing on the same track as John Force. You don’t see peewee football playing at the Astrodome right before the Super Bowl.

59. Neither the drivers nor the NHRA are on their soapboxes pushing political or social agendas. Refreshing. That’s an organization that understands its fan base. 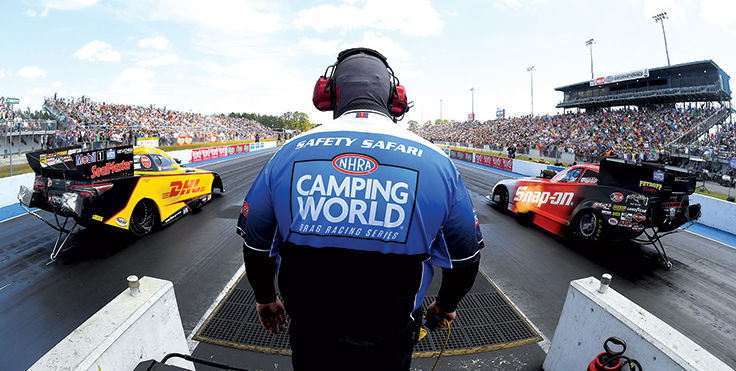 60. The simple pleasure of rooting for a different driver each race and often being conflicted if I happen to want to root for both drivers. That’s a good thing.

61. “Watchability” is not dictated by market size. Regardless of the city, it’s always fascinating to watch.

63. Watching a first-time drag-race attendee jump out of their skin and seeing the look on their face when Top Fuel stomps on the loud pedal. I always shoot video. And it’s always funny.

64. The glorious smells of fuel in the air at a dragstrip; especially nitro.

65. If your seats are close enough to the starting line, after spending the day at the drags, coming home and literally finding small pieces of rubber in your scalp.

66. The noticeable quiet as you walk back to your car after a day of racing making you appreciate what awesome power these cars display.

67. How you can feel exhausted after a day of simply sitting in the sun, walking around the pits, eating and drinking, and watching drag racing. I can only imagine how exhausted the drivers and crew are at the end of each day. And don’t forget their mental exhaustion.

68. Getting into your car at the parking lot after a day at the races and realizing your everyday driver sucks. It makes you appreciate the power, bravery, and, yes, insanity of the drivers.

69. As I kid, after a day at the races, I’d lay in bed still hearing the sounds of cars making a Doppler effect pass down the track. I still do.

70. How, to me, all professional drag racers are modern-day superheroes.

Lou Santini is a comedian, TV and event host, writer, voice actor, and broadcaster. His dream job is to do fan interviews for the NHRA at every track in America. You can read more about him at lousantini.com