Exclusive interview: Force is back and gunning for championships and records

NHRA fans, John Force can’t wait to see you. He’s missed you. What's he been up to the last 12 months and what's in store for 2021? Find out in our exclusive interview with the 16-time NHRA Funny Car champion.
16 Feb 2021
Phil Burgess, NHRA National Dragster Editor

NHRA fans, John Force can’t wait to see you. He’s missed you. Matt Hagan and Ron Capps, he’s missed you, too (not as much). The good news for everyone is that they won’t have to wait long for the reunion as Force announced today that John Force Racing will make its return to NHRA competition at the season-opening Amalie Motor Oil NHRA Gatornationals.

It will be the team’s first event in more than a year after he withdrew his entries from competition after the COVID-19 pandemic shut down the 2020 season after the NHRA Arizona Nationals Feb. 23. Even though the NHRA season did resume after a four-month break to complete an 11-race season, the JFR cars did not return.

In an exclusive interview with NHRA National Dragster, Force says he and his teams are coming back gunning for it all, and that he personally hasn’t felt this good in years. He spent the last months getting ready for this moment. He’s lost 25 pounds, been in the gym working on strength, and eating carrots for his eyesight. He’s coming for the big trophy. 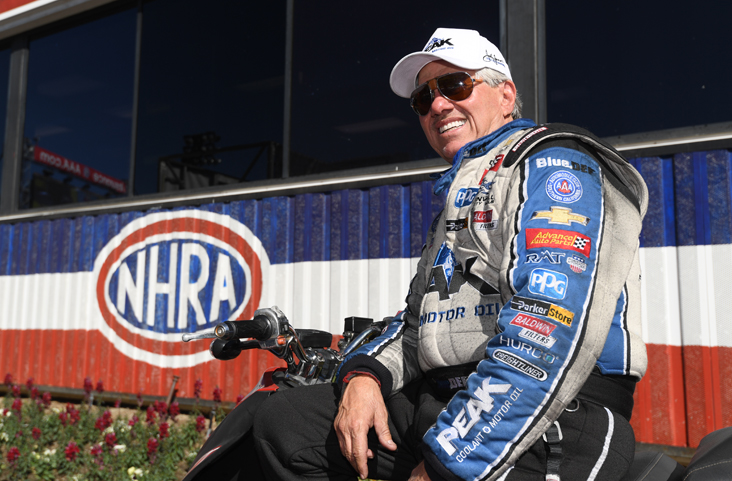 Any interview with John Force is always an adventure; that's why we love him. Here's some insight from the mind of John Force (look for the complete interview in the next issue of National Dragster).

On his routine during the pandemic:

“I’d get up at 6 a.m., get my coffee and get on a treadmill, and get up and running. My first meeting is always Robert [Hight], usually an hour or so to go over everything to know what I’m going to say and what I did wrong yesterday, and then before you know it, it’s 3 or 4 in the afternoon, then I head home for the gym to do my workout. I’ve been working to build my legs stronger to cut some lights and get after this thing. I want to get back to winning.

“Robert and I worked all year. I go from my house to my shop and back. We had 10 months, and we worked every day, me and Robert. I couldn’t have gotten through this without Robert. When I was buried over my head, he’d come in, brush the dirt off me, and we’d go back at it. The mental part was the worst part of this pandemic. After a while, it takes you down a road that you don't know where it's going.”

On staying immersed in the sport while away:

“I wear my Peak face mask every day, Robert wears Auto Club, and Brittany [Force] wears Monster and Flav-R-Pak, so we try to keep giving them exposure. I was still on the clock working for them through the end of last year and now we start a new year. 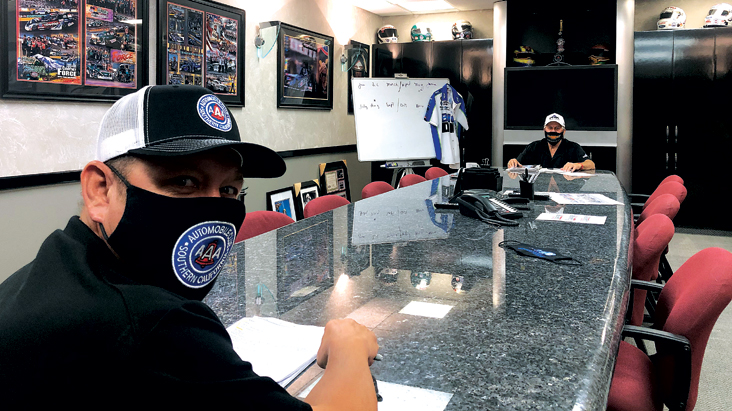 “The hardest part for me was watching it on TV, but it got me through it and made me realize how much I missed it. I was impressed with what they did to put on a show and to keep our fans involved in it, and especially me. It was hard to read your paper [National Dragster] because I wasn’t part of it, but I called most of the champions and congratulated them and their crew chiefs.

"I want to thank the PRO organization; they all have one goal, and that’s to take our sport to the next level and build it to grow it in this pandemic. I want to give credit to NHRA and the marketing group to replace a sponsor that quick with Camping World, to pull that off in this economy in the middle of a pandemic, cheers to them for making that work and keeping this sport alive last year and keeping the teams up on what was going on with races. I thought that they did a great job for setting up all the safety guidelines and everything.”

On what he learned during the time off:

“I haven't had a vacation in 40 years. I learned so much about my family stuff, about my home, I saw parts of my home I’ve never seen. I took the time that I never had in 20 years to get to know my family and get my body well and get back on track.

“I learned about the love I have for this sport and the love for the fans and the people, and I can tell you that if it weren’t for the pandemic I’d be kissing everyone on the lips.

“The biggest thing I learned was how great my life was, and I live every day to make it work because I didn't realize how wonderful it was, so I thank God for that, 'cause I've had a lot of talks with God lately. It also gave me a real respect for the loyalty of my sponsors to get through something that I've never seen in my lifetime."

On the decision to sit out the majority of the 2020 season:

“Everybody was asking if we were coming back, and we were sure we would because we all thought the pandemic would be gone. When that didn’t happen, I immediately started looking at what was best for my sponsors, especially those who rely on sponsor activation at the events. So, in the end, the best course was to just reset everything for 2021.”

"I have to give Don credit. He kept his teams alive and was out there, so congratulations to Hagan. I thought Tommy Johnson was going to get a shot at the title. It didn’t matter who wasn’t there, all that mattered was that you won; I’m not taking anything away from anyone.

“But we’re ready. We're going to give them a run. Ol’ Robert drools when he talks about it. I drool, too, but that’s all the time. But, no, I tip my hat, I’m going to go back humble and say, ‘I’m here, and I’m going to work my ass off more than I ever have when I thought I was working.' I’ve got a whole new attitude. We’re going to win championships, set records, and run low e.t.” 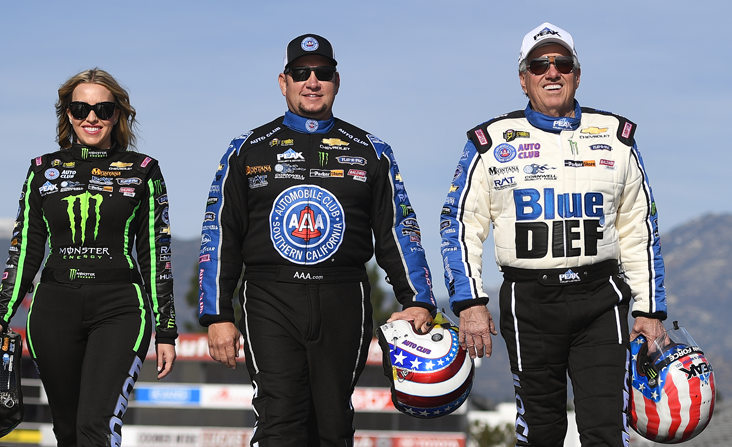 “We’re focusing on three hot rods, two Funny Cars: Mine with Peak and BlueDef, Robert’s with Auto Club, and then Monster and Flav-R-Pac on Brittany’s Top Fuel car. I brought my teams back [Feb. 15]. [David] Grubnic, [Mac] Savage, Jimmy Prock, Chris Cunningham, Danny [Hood], and Tim Fabrisi are tuning our hot rods. We’ll do some testing down in West Palm Beach [Fla.] and then go to Gainesville and test some more."

“He's going to work on Robert’s car, and he'll still be testing with me in my car. I need to get some seat time in it, but I'm gonna put him in it. The kid’s got a big future, but we had to park his car for reasons until we see where this season's going.”

On any concerns about being out of the car for a year:

“None. I've done this for so long, just like they say about riding a bike, that I know my race car. I can sit in here in my Chevrolet truck, and I can actually feel what I do in the race car. I know the feeling, the pressure on my body. That’s how well I know it because I've been doing it so long, so I know that won't be a problem “ 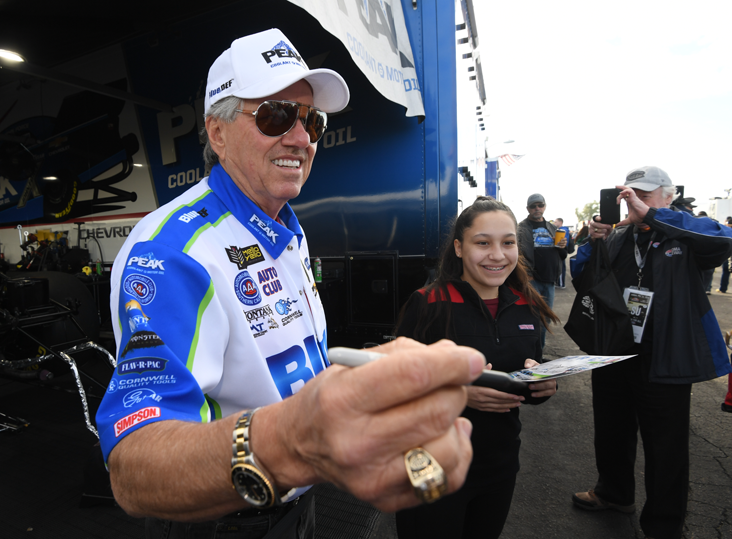 On missing the fans:

"Since 1973-74, I’ve raced Funny Cars continuously. Never had a break, never wanted a break, said I’ll go until I tip because I love the fans. In my early days, we couldn't afford lunch, and we’d go over the concessions and get free sandwiches that they had left over or get them at half price. That was just a way of life, and then when fans would come by the pits and they loved you not because you were anybody but because you gave them the time and loved them, and maybe would have a beer with them in the parking lot. The fans have always kept me alive."

"I'm gonna retire one day, but I'm gonna drive for awhile because after losing weight and getting back in shape, I feel like I felt five years ago, and but I'm in better shape than I was then.”

“But most of all, I’m excited because I'm gonna be ready; we’re all going to be ready."