Even though he's leading the pack, the real work begins now for Greg Anderson

Greg Anderson is leading the Pro Stock points and the Pro Stock field in Pomona, but there's no resting on those laurels heading into a crucial day of qualifying at the Lucas Oil NHRA Winternationals and at the races beyond leading up to the Countdown to the Championship.
31 Jul 2021
Phil Burgess, NHRA National Dragster Editor
Feature

In seven of the eight Pro Stock races so far this season, Greg Anderson has qualified No. 1, so it wasn’t unusual to see his HendrickCars.com Camaro parked in the No. 1 spot Friday night at the Winternationals, but the points leader knows that the job really begins today.

“It's obviously fun to race out here at night,” he said. “I don't think I ever remember running at the Pomona when it's been dark on the racetrack, so pretty neat. I wish we could race under these conditions, but it's gonna be a little bit different on Sunday, obviously; it'll be hot and Sunday, like we had all day long Friday, which was a tough, tough, brutal day, a long day, a lot of sweat.

“When the sun goes down, it's a completely different racetrack, a completely different feel and the cars come to life. On Saturday, we'll get a shot at that heat at 3:30 in the afternoon, we're gonna see that brutal heat and see what we've got for those conditions, and that's what matters. It's cool to be out and go out and be able to run low e.t. on a great race track when the sun's down, but Sunday is all about the heat the sun on the racetrack, so we're gonna have to do well with that shot Saturday to set us up for Sunday. It's going to be the hottest conditions we've had all year hottest we've ever raced here in Pomona. So really a whole new ballgame for everybody out here.”

Anderson not only is chasing the No. 1 spot but also looking to tie his mentor, Pro Stock icon Warren Johnson, for the all-time class lead with a 97th career win, and the Pomona track, where he’s won 12 times –- six at the Winternationals and six at the Auto Club NHRA Finals –- may be the perfect place to do it. 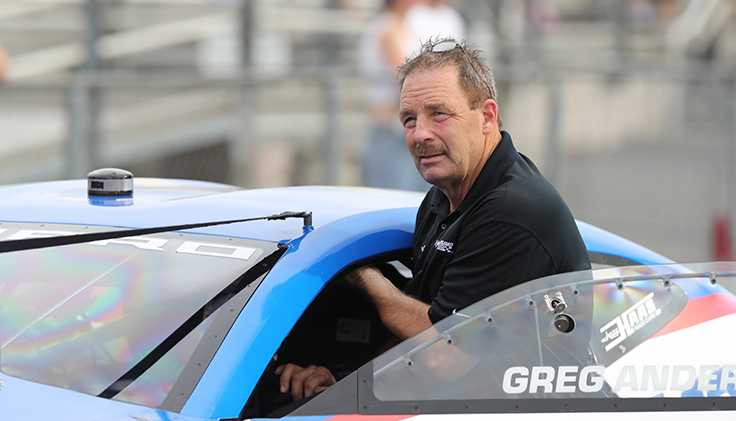 “Pomona has obviously been a great racetrack for me and the whole KB Racing team,” he said. “Jason Line’s one here a bunch, too, so we seem to do very well here. I'm coming out of Sonoma, a racetrack that we've done very well too, and I didn't get the job done there, so that one hurt a little bit and let one get away there. So, I would love nothing better to make it happen here.”

Line won’t get a chance to win here, as Anderson’s longtime driving teammate has put away his Pro Stock racing helmet this season and is concentrating on brewing horsepower for Anderson and their KB Racing engine customers.

“I think it's helped the performance of the car, I think everybody can say that the car is performing better than it ever has,” said Anderson. “We've always believed that the work that’s done in the shop is what wins you races, that what you show up is what gives you a chance to win, and we’ve showed up with a great product, and that's because of the work has done at the shop. It’s been a benefit for Jason to stay home while we're out here. Jason and I are the leaders of the engine department back home, but we have to pack up and go race 20 times a year and we're gone from the shop. Other teams have guys back in the shop that stay there all the time, they don't go to all the races. So we missed that element.”

While the result has been more horsepower under Anderson’s right foot, it’s also made life at the track between runs that much harder.

“It’s absolutely been tougher at the racetrack. It's been more work for me, because it's not only my car, but we've got four rental customers that we've got to take care of, and Jason did a great part of that. I've had to step up now and do a whole bunch of that myself, so it's been a tougher deal at the racetrack for me and it's definitely a bit of a distraction, but you've got to find a way to make it happen.” 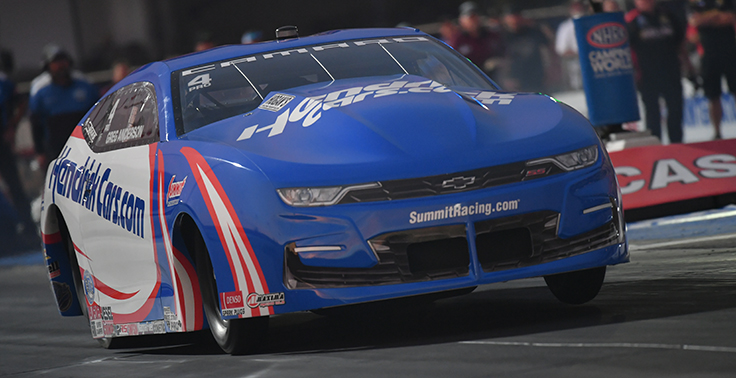 Although Anderson’s Camaro has been fast in qualifying, he only has two event wins ii in Gainesville and Atlanta, the first and third events of the season – and has been shut out since.

“I've got a great car, but I need to win more, no question about that,” he admitted. “I've got an opportunity to win at every race I go to, and that's something you don't get every year. I expect I'll have that the rest of the year, but I still have to make it pay off, I have to get the job done on Sunday. Even though I've had these No. 1 qualifiers, we're talking about a half a hundredth [of a second] or a few thousandths; it's not a huge gap. Anyone can win, and it all comes down to that starting line and how good a job the guys do with the car on Sunday. Out of the 16 cars, legitimately 14 to 16 of them can win, and every round is like the final round anymore, and anybody can beat anybody. So that's great, the class is fantastic. It makes it hard to win. And I feel great that I've got a great car, but you have to have everything else perfect, too; the driver’s got to be perfect, the car’s got to be perfect, and the engine's got to be perfect too.”

With just a few races to go until the Countdown field is set, Anderson has already clinched his berth for the playoffs, but the work is far from done.

“Well, obviously you don't want to peak too early,” he said. “We've had a great race car all year but that doesn't matter if you don't run good going into the Countdown. We've got to find a way to make it even better because the rest of the teams will gain by the time we get to the Countdown, so we can't rest on what we've got. We've got to try and find a way to make it better. So any chance we get, we're going to test some things out there and try some new ideas and thoughts, and you've always got plenty of them.”