After struggling in Pomona, a venue where he has enjoyed a tremendous amount of recent success, Doug Kalitta is searching for answers heading into Topeka as he seeks to right the ship in his bid for a first NHRA Camping World Top Fuel championship.
12 Aug 2021
Josh Hachat
Feature

After struggling at a venue where he has enjoyed a tremendous amount of recent success, Doug Kalitta is searching for answers heading into Topeka.

A difficult summer got a little worse in Pomona for the standout Top Fuel veteran, as he fell in the first round in Pomona to close out a Western Swing that included only one round-win. It was particularly stinging in Pomona, a track where he had won three straight races and been to five consecutive finals, as Kalitta and his team couldn’t solve the rigorously hot conditions.

After a week off, Kalitta will look to regroup at this weekend’s Menards NHRA Nationals presented by PetArmor at Heartland Motorsports Park. A victory would be a shot in the arm he needs and erase the team’s current slump, while also giving the longtime standout his 50th career Top Fuel win.

“We didn’t have the race we wanted in Pomona for sure. We had won the last three and been to five finals in a row. You would like to keep that streak going, but it just didn’t happen. It is time to start a new streak,” Kalitta said. 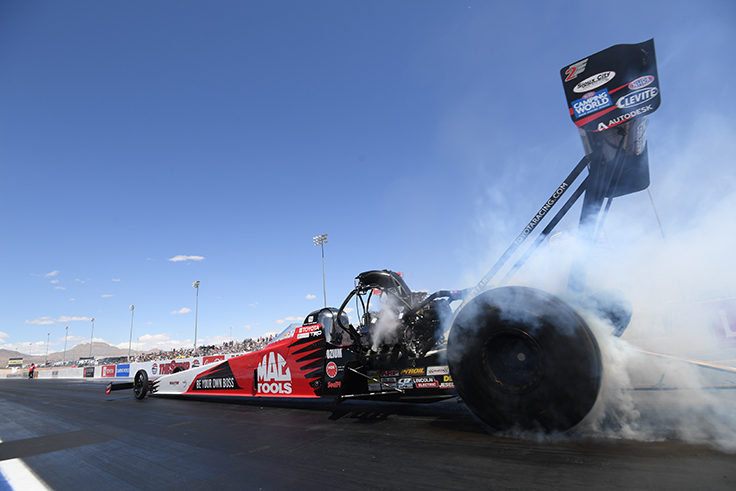 Things looked good for Kalitta early in the season, advancing to final rounds in Las Vegas and Houston. But it’s been a struggle since then, dropping from fifth to ninth in points as the team looks to right the ship.

Barring a total freefall, his place in the Countdown to the Championship is likely secure, but Kalitta’s goal is to be thriving when the seven-race playoffs start next month. A week off between Pomona and Topeka allowed the team to re-group, and Kalitta is ready to come out firing this weekend.

“After three races in three weeks, the week off was a good thing,” Kalitta said. “I think people got to relax a little, but then we were right back at it, getting ready for these last three races before the Countdown.”

It’s a critical time for Kalitta, who is seeking his first Top Fuel world championship, and the sense of urgency is apparent. The good news is he’s had plenty of success at Heartland Motorsports Park, winning twice and advancing to five final rounds.

A third victory would do wonders for his playoff position in a tightly packed Top Fuel class, as he sits less than four rounds out of fifth. A winning weekend in Topeka would also instantly remove all of the recent struggles.

“I love racing in Topeka. We have won a lot of races there and been to a lot of finals,” Kalitta said. “I think it will be hot again like Pomona, and we will be ready for that. I like the competition, and we are doing everything we can to be in a position to make a run for the championship.

“Drag racing gives you the opportunity to win every time you get on the track. I know what this Mac Tools team is capable of, and we showed that earlier in the season. We can get back on track and be in contention for this championship pretty quickly.”