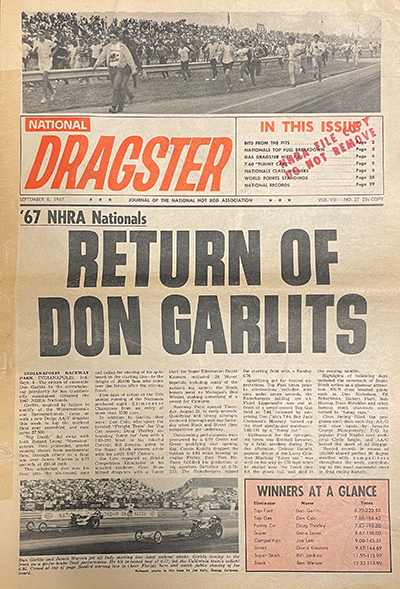 “When the Godfather calls, you come running.” Fred Miller told me, joking about Don Prudhomme inviting him to come out from Florida to California for his 80th birthday party earlier this year, but it’s good advice.

But Prudhomme is not the only Godfather Don in our business, so you can bet that when Don Garlits came calling earlier this week, asking for a favor, I came running.

“Big Daddy” wasn’t calling to re-invite me to his COVID-canceled 90th birthday party (Jan. 14), but to make sure that a guy who more than 50 years ago helped make possible one of his signature moments — his victory at the 1967 Nationals that led to his famous starting-line beard shave — was recognized after his recent passing.

Bob Taaffe was a young, red-headed Marine when he first walked into the Garlits Automotive Speed Shop in Seffner, Fla., in 1959 and quickly endeared himself to “Big” with a strong work ethic that began with sweeping floors but ultimately brought him into the inner sanctum of the Garlits orbit. He helped in the build of Swamp Rats 6-A, 6-B, 7, and 8 and crewed on many of Garlits’ cars, but it was his work with “Big Daddy” in the summer of ‘67 that forever embedded him in Garlits’ gratitude.

In early 1967, Garlits was still flogging Swamp Rat 10, which was simply 1965’s poor-performing Swamp Rat VIII (Garlits switched between Arabic and Roman numerals during this period) with a new and longer front half, and while a number of his peers, including John Mulligan, Tom McEwen, Don Prudhomme, and Pete Robinson, were dipping into the six-second zone for the first time, Garlits was struggling with a car that was too old, too short, too heavy, and too rigid. 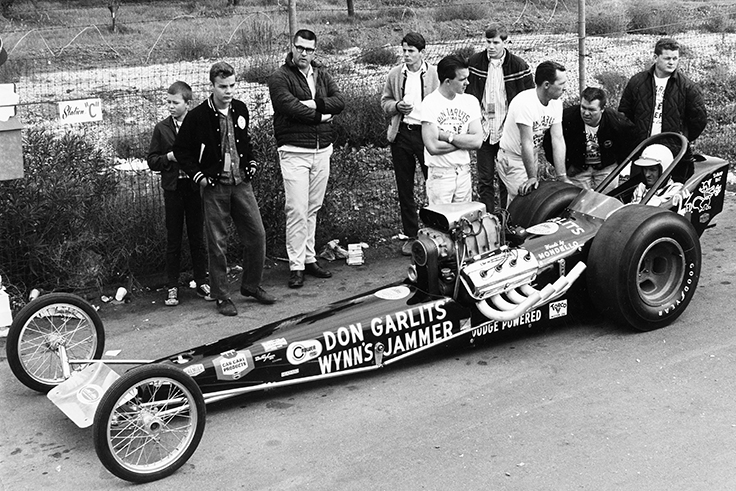 All of those “too’s” came to a head at the 1967 Springnationals at Bristol Dragway in June, where the chassis broke a main framerail right at the motor plate during qualifying and simply could not be repaired.

“We went out to [a local chassis] shop and tried to weld it and they didn't have any of that good stuff,” Garlits told me. “It was Saturday afternoon by the time we got back to the track. [The chassis] was just kind of patched up, and I said, ‘Boys, we will only just barely get in the show and get beaten the first round. We better spend our time building a new car,’ and Bob said, ‘So let's go home and build a new car.’ We drove out of there and didn’t even take our last qualifying shot.”

They loaded up and made the 700-mile trek to Seffner and, incredibly, built, Swamp Rat XI in just 72 hours

“It was me, Bob, and Jim Marrone,” he remembered. “We were only sleeping four hours a night and Pat [Garlits, his wife] was making four meals a day for us.” 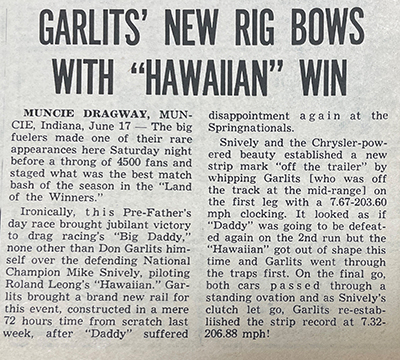 The team loaded up the new car and drove 1,000-plus miles to Muncie, Ind., for a June 17 match-race date with Roland Leong’s vaunted Hawaiian, driven by Mike Snively, and beat them two out of three.

“On the first run we were out in front of them, but the front end came up a little bit, but it was a new car and that was first run — there was no time trial or nothing — so I thought it'd be better if I just backed off of it and we put 10 pounds of weight on it and then won two straight. We knew we had a winner because the Hawaiian was as good as they came in those days.”

Although Garlits did set the Muncie Dragway track record with a 7.32, it was still a far cry from the sixes. 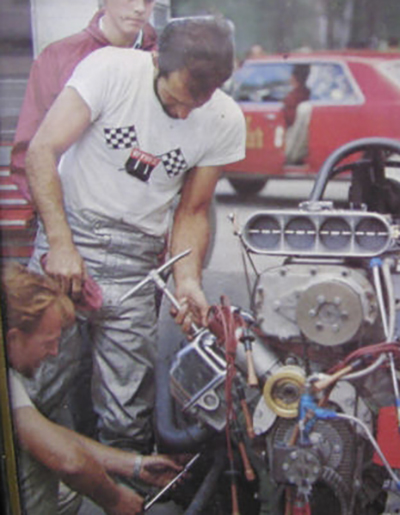 “We worked so hard on building Swamp Rat XI and getting it to Muncie that we didn't shave our beards because there wasn't any time, which is where we kind of got the idea that we wouldn't shave until we went in the sixes. It was so funny. McEwen said, ‘When you guys go six, those beards will be so white, you'll be tripping over. I thought that was cute. We didn’t think it would be any time but for a few months we never did get on a decent enough strip to run a six-second time until we got to Indy.”

Even Indy wasn’t the perfect salve as he qualified just 23rd in the 32-car field with a 7.163, light years behind No. 1 qualifier Chuck Kurzawa’s stunning 6.760 in the Ramchargers entry. In fact, the first nine qualifiers all ran in the sixes and Top Fuel’s all-time great was nowhere close.

Garlits must have told this story 10,000 times, but he was just as excited to tell it to me again.

“The truth of the matter is, the Goodyear tires weren't up to speed yet, so Monday morning I went over to the M&H trailer — Goodyear gave me the money. They said, 'Here's the money; go buy some M&Hs for the race’ — but Marvin [Rifchin] was really upset with me for running Goodyears because I was running tires with him from the very beginning,” he said.

“Marvin said 'I don't have any tires,' but he had them sitting all around. He said, 'James Warren just bought a brand-new set and maybe he'll sell you his take-offs; they look pretty good.' So I went over to James Warren's and there were these brand new M&Hs mounted. and the old ones were sitting there on the ground. I asked, "What will you sell me the take-offs for?' He said, 'Why don't you just take the new M&Hs? They need a couple runs on them anyway — in those days, they needed a couple runs to really get going good — and he said, ‘You'll only be in a round or two anyway. So that'd be good to just get all broke in for me.’

“We won the first round [ironically, beating defending event champ Sniveley again and running a take-notice 7.06 in the process], and I went over and asked if he wanted the tires back, but he told me to just keep them.”

Garlits then beat red-lighting and similarly M&H-shod Mike Sorokin in the second Hawaiian entry then pounded out a 7.03 in round three to beat wheelstanding Jerry Dawson and a 7.01 to beat red-lighting McEwen, and put him into an ironic final-round battle with Warren.

Warren had qualified No. 4 with a 6.873 and ran a blistering 6.85 in the semifinals, and was the heavy favorite. The bad news for Warren was that the team had broken its rear end in the semifinals and the replacement had shorter gearing, meaning it was going to rev a lot higher at the finish line.

“Before the final run. I said James, ‘I have your brand-new tires all broken in. He said, ‘What did you run?’ and I said it was seven something, and he said, ‘I want to stick with my tires. They ran 6.85 That'll be fine. And so I ran on the tires, we really stood on and on the last run.”

Garlits blistered the Indy timers not only with his first six, but a wild 6.77 that defeated Warren, who blew the engine in the lights on a 6.95 pass.

“I knew it was going to run in the sixes but I had no idea it would run within a hundredth of the world record,” he recalled. 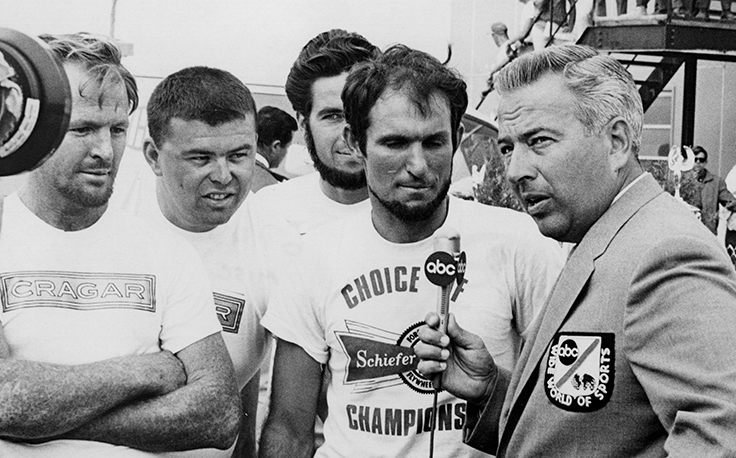 True to his word Garlits shaved his beard on the Indy starting line, after an ABC interview with Taaffe, left, Chuck Rokla, center, and Marrone proudly looking on. 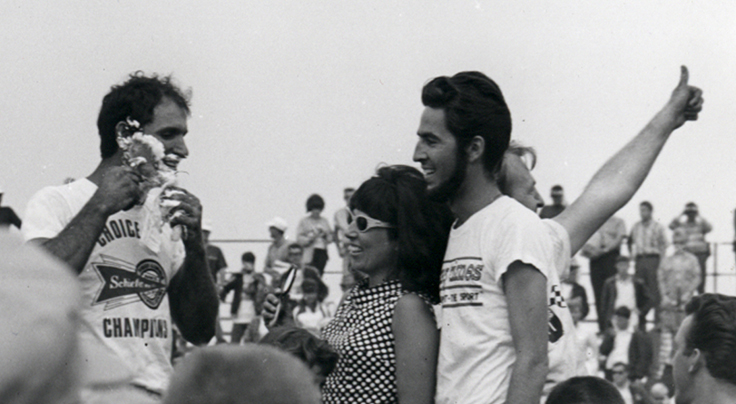 That's Taffe giving the thumbs up to the crowd.

“I made a nice short car, really super light and Bob just screamed, ‘Don't do it, don’t do it. Make it longer.’ I said ‘It’s so hard to get it in and out of the trailer. It's the light weight that makes the difference. It took it out to California, and it was a total failure. So we built a nice, long car, Swamp Rat 12-B, and that car was a killer.” 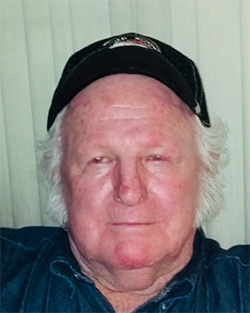 Taaffe — who was enshrined in the Division 2 Hall of Fame in 1995 — left the road team to take Swamp Rat X on a yearlong Champion Spark Plugs promotional tour but fell out of the Garlits orbit in the early 1970s but left behind a lasting memory with ‘Big Daddy,” who shot the photo at right of Taaffe not long before he passed away.

Garlits will pay his old friend the ultimate respect, placing his ashes in an urn in the museum space when Swamp Rat XI is enshrined, just as he had done with Swamp Rat VII after another of his longtime accomplices, Connie Swingle, passed away in 2007. 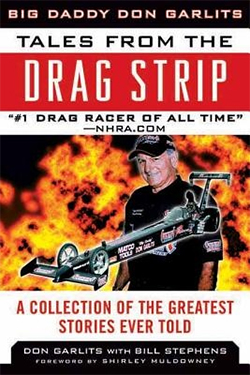 I found a very funny Taaffe story in the 2013 book, Tales from the Drag Strip: Memorable Stories from the Greatest Drag Racer of All Time, that Garlits wrote with Bill Stephens.

The date is not clear from the except but it’s the late 1960s and Garlits is racing Prudhomme at Detroit Dragway, not long after losing a race to “the Snake” at Cordova Dragway during which Prudhomme apparently employed some delayed Steve Carbone-like starting-line trickery.

Out of the corner of my eye, I could see Prudhomme moving up, and he pulled right in. It was a nice, clean start. I outran him this time because I didn't have my clutch building up a lot of extra heat like it did two weeks earlier.

When I got down to the turnoff, I pulled to a stop and saw Prudhomme come around that corner practically on two wheels. He got out of the car, and he was really hot. He said, “I'm gonna kill that son of a bitch when he gets down here! I'm gonna kill him!’

He said, "If he ever puts a hand on my car again, I'm gonna kill him!"

Now here comes my truck, and it was coming around the corner on two wheels. Taaffe jumped out of the truck, walked right over to Prudhomme, and said, "Snake, you're going to stage properly from now on."

Snake says, "If you ever touch my car again, I'm gonna kill you!"

Taaffe walked right over to Snake's car, took his fist, and smashed the cowl in. Then he turned around and said to Prudhomme, "I touched your car." 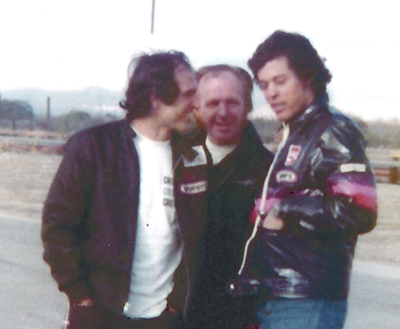 (PIctured: Garlits, Taaffe, and Prudhomme, circa 1973)

Now Taffe wasn't that big a guy, but he was tough. After he said that to Prudhomme, things began to calm down. I still didn't know what had happened at the starting line, so when Bob and I got into the truck, I asked him, "What the hell happened down there?"

He said, "Well, you remember what happened at Cordova, right?"

Bob said, "Well, you were staged this time and he was just sitting there not doing anything, and the starter was waving him up to stage and he was still sitting there, so I walked over, grabbed his injector linkage, cranked it up to high-C, and just walked him in."

Can you imagine that? Someone walking up to an opponent’s Top Fueler and tweaking the linkage to make his car stage? Crazy!

Great stories of a guy that not many knew by name, but that Don Garlits won’t let us forget. Thanks, for sharing him with us, Godfather.