Dom Lagana and the Nitro Ninja are back, with a little help from his friends

On the one-year anniversary of his terrible auto accident, Dom Lagana ran the family's Nitro Ninja Top Fueler with drivers Gary Pritchett and Clay Millican at a match race in Michigan, a testament to how far Lagana has come in the last 12 months.
10 Aug 2021
Phil Burgess, NHRA National Dragster Editor
Feature

On Aug. 9, 2020, Dom Lagana’s life changed forever as a highway accident led to severe burns to and the amputation of both legs of the longtime Top Fuel driver, tuner, and teacher. Lagana and his brother, Bobby, found a great way to acknowledge the incredible progress that Dom has made made in the last 12 months by running their Nitro Ninja dragster at a Michigan match race last weekend close to the one-year anniversary of the accident. 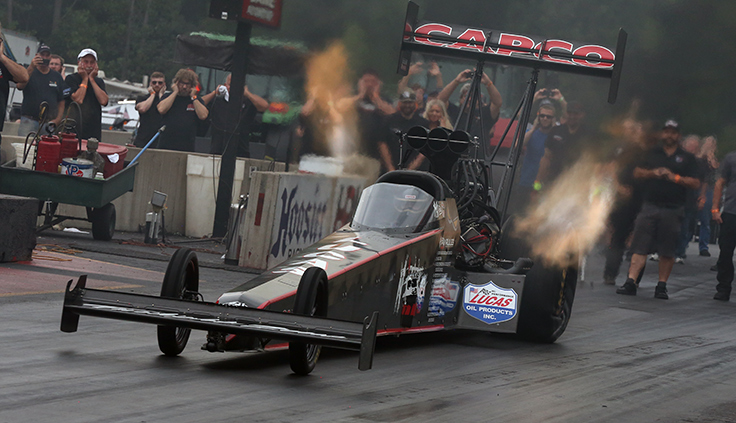 The Ninja dragster hadn’t been down a racetrack since 2019 but made three passes, one with fellow Torrence Racing crewmember Gary Pritchett in the saddle on a 4.16 checkout pass and a pair, including a 3.85 at 324 mph, with borrowed pilot Clay Millican behind the butterfly, and had the financial support of longtime backer Lucas Oil Products in their corner.

“It went friggin’ perfect, man; It was awesome,” said Dom. “Our car ran great, Gary did awesome, Clay did awesome, and we didn’t hurt any parts.” 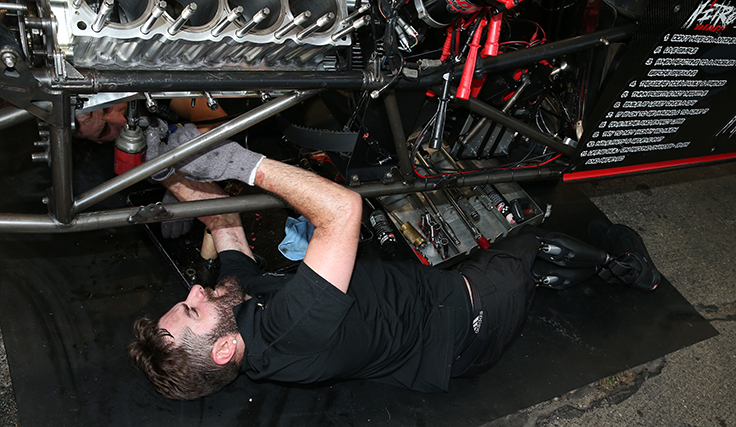 Dom, who was fitted with prosthetic legs in February, not only tuned the car but also worked on it, diving under the engine to perform bottom-end work on Saturday.

“I’ve done it at the shop once since my accident and thought, ‘I feel like getting under the car when it's hot and oily,’ “ he said. “I love doing the bottom end; I've been doing it since I was 13 years old. And it was nice now in my situation to get under there and do it again. It felt really good. Just to know what the point I was at a year ago and to be where I'm at now is unbelievable. I just ... I'm so lucky and so blessed and thankful for everybody.

“I felt great the whole weekend. I've worked pretty hard on [Billy Torrence’s] car, and I had some days and done a lot of steps, but it was by far the hardest and longest day I've had yet since my accident,” he said. “I felt great the next day. It was really good for me to prove to myself that I can do it physically and that there’s some light at the end of the tunnel for me, so I can't complain at all. My rehabilitation is going unbelievable, and a weekend like that does wonders for you. 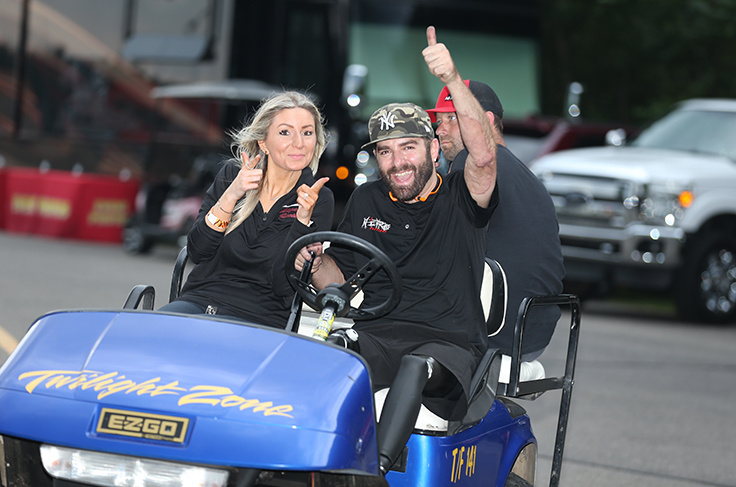 “To watch Gary run and really enjoy himself, and that first run after the national anthem, because we were the first cars for the show, and with Clay driving a new car and running 3.85 at 324, that was unbelievable. To share that experience with my fiancée Sara by my side. We’ve been running at that track for almost 20 years and have such a huge following up there, and all of the fans were amazed to see me out there working. It was really special.”

Pritchett, who earned his Top Fuel license back in 2015 in the Dote family dragster, got the first honors with the checkout pass Friday. 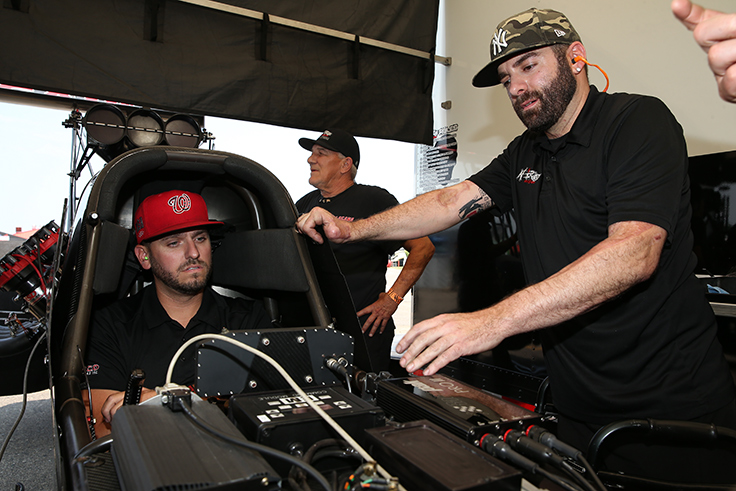 “We just were planning on making a shakedown run just because our stuff’s been sitting so long, so we thought, ‘Let Gary get a little seat time; he hasn't driven in a little while, and my dream was either [brother] Bob or Gary to drive at the match race, but we figured we should have somebody in there with experience because at a match race there is pressure because you're there to put on a show, so it was kind of a no-brainer to bring in Clay.

"We've known Clay for almost 20 years and raced alongside him all those years in IHRA. He and his old team owner Peter Lehman and [crew chief Mike] Kloeber used to help us out a lot way back in the day and taught us a lot, so it was pretty special to have Clay drive at a track where we used to race each other all the time. 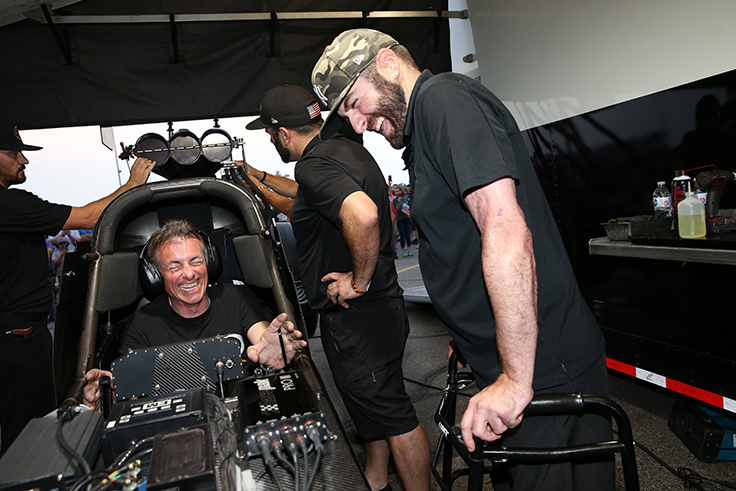 “I've watched our family car run before, you know, when Tripp [Tatum] or Ashley [Sanford] drove, but that's the first time somebody has driven our new Lucas car and to watch somebody other than me or Bob drive the car, it was really enjoyable. Obviously, I love driving it, and I miss that, but I got such a gratifying feeling watching Gary and Clay drive it.”

“It was such a special weekend to get to do that with him and Bobby,” said Millican. “They've been through a lot, and I'm amazed at his spirit and his motivation. I honestly felt more pressure than going into the final round before our first run. Dom could have picked anybody; nobody would have told him no about driving that car. For him to ask me, I'm like, 'Man, I don't want to screw this up.' 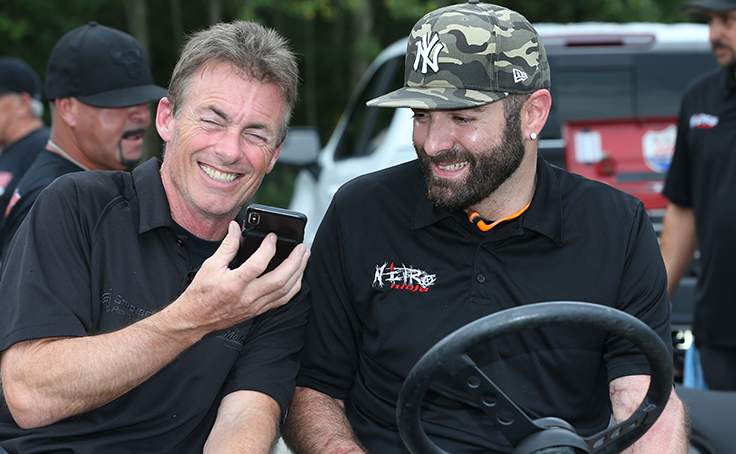 “Dom’s always been a good person, but his whole overall spirit, it's just like, ‘I'm moving, forward. I'm working on my race car. I'm gonna go run my race car.’ It's pretty amazing; it's incredible. He is such an inspirational, unbelievable human being to watch him and how much he truly enjoys racing. He's just such a motivational person to me, and Gary Pritchett did a wonderful job. He made a little squirt on Friday. He looked like a pro. He really did.”

It’s remarkable how far Dom has come from those dark days last August when the burns and a serious head injury put his life in peril, but the strength and resolve he has shown has been inspiring to the entire NHRA community.

“I’ve still got a lot of steps to take to get stronger and more confident on my legs, but my rehab is going unbelievable,” he said. “I don't take it for granted, but sometimes I lose sight of how far I’ve come. Today, we went to lunch, and I'm walking in with a cane, and it’s crazy if I sit back and actually think about where I'm at now. Just have all the support of Sara and my brother and the whole Torrence family and all our guys." 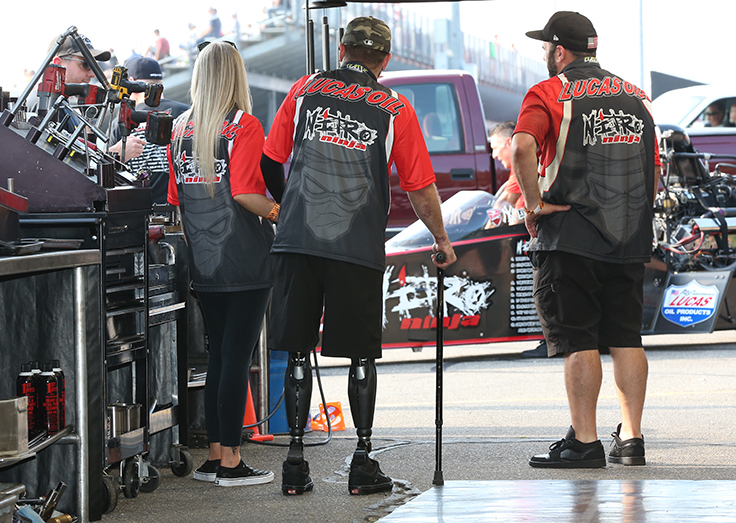 Dom and Sara will get at the end of September on the weekend between the St. Louis and Dallas events, but this Friday he’ll also be celebrating his 36th birthday, after missing his 35th while in a post-accident coma.

“My goal is to not miss that birthday again,” he joked. “I just can't thank everybody enough who has stood by me this last year, and the healthier I get, I want to try to help as many people as I can who are in my situation or other kinds of situations. I just want to give back for all that I’ve gotten.”

READ MORE: After a life-changing accident, Dom Lagana is on the comeback trail (Feb. 2021)