Today is a big day for NHRA fans and racers since it marks the start of professional qualifying for the 67th annual Dodge//SRT NHRA U.S. Nationals at Lucas Oil Raceway at Indianapolis. Here is everything you need to know about the World’s Biggest Drag Race in our Friday preview.
03 Sep 2021
Kevin McKenna, NHRA National Dragster Senior Editor
Race coverage

There is so much happening today at the Dodge//SRT NHRA U.S. Nationals that it’s hard to keep track of all of it. Thankfully, we’ve got our daily NHRA.com preview to help keep track of a packed schedule that includes the start of professional qualifying, the JEGS Allstars competition, the Dodge Hemi Challenge, and the continuation of sportsman eliminations.

For NHRA Camping World Series pros, the U.S. Nationals not only marks the biggest and most prestigious event of the season, but it’s also the end of the regular season. Following the conclusion of Sunday’s final rounds, the fields will be set for the Countdown to the Championship, NHRA’s annual playoff to determine season champions. The U.S. Nationals also features a unique format that awards points-and-a-half for pro racers so there is a strong likelihood that positions will change in just about every class.

One position that is certain not to change is the lead in Top Fuel where Steve Torrence has a hammerlock on the top spot. The winner of seven of the first 12 races, Torrence and his Capco Contractors team are favorites to win a fourth-straight world championship. Before the battle for the championship begins, there is the not-so-small matter of the U.S. Nationals title to consider and for all of his success, Torrence has won the Big Go just twice, once in Top Alcohol Dragster in 2005 and again in Top Fuel in 2017. He’d certainly like to add a third Indy title and he’s a favorite to do just that.

The top eight spots in Top Fuel are locked with Brittany Force, Antron Brown, Mike Salinas, Leah Pruett, Shawn Langdon, Clay Millican, and Justin Ashley guaranteed to make the playoffs. Barring something very strange, Billy Torrence and Doug Kalitta are likely to join them to round out the ten-car Top Fuel field. 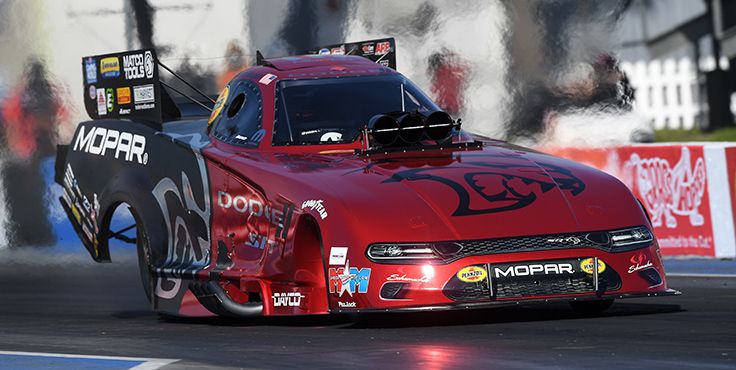 The battle at the top of the Funny Car field is vastly different than the one in Top Fuel with the top five drivers separated by just 25 points which means that any of them could emerge from Indy as the top seed. Currently, Matt Hagan is the leader followed by Bob Tasca III, J.R. Todd, John Force, and Ron Capps. Early season leader Robert Hight is also in the mix but he’s 83 points behind so it might be difficult for him to pass five drivers in one event.

Alexis DeJoria, Cruz Pedregon, and Tim Wilkerson are also locked into the Countdown while Blake Alexander has the inside track to the No. 10 spot as he’s got a sizable lead over Jim Campbell.

When it comes to Indy wins, most of the drivers in the Top 10 have experienced the thrill of winning the sport’s most prestigious event but two names that are absent from the list are Ron Capps and Bob Tasca III. Capps won an event at Lucas Oil Raceway last season but it wasn’t the U.S. Nationals while Tasca was a runner-up here in 2011. Both drivers should be among the favorites. 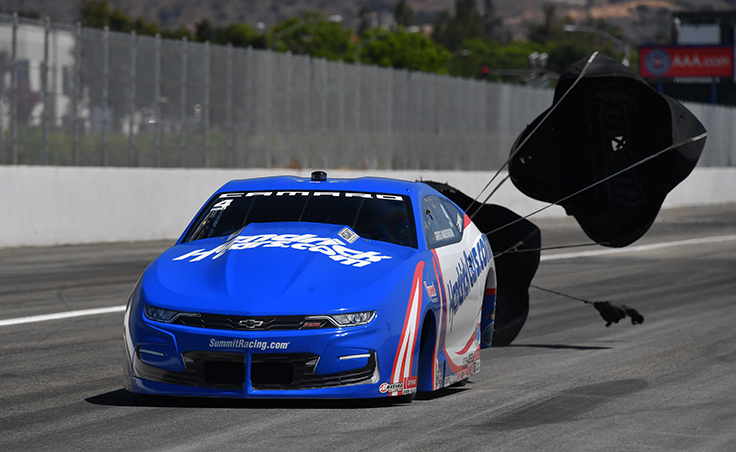 NHRA Pro Stock teams took a short break after the Topeka event last month so they should be refreshed and ready for the Big Go. The competition in Pro Stock is so close that there are probably a dozen or more teams capable of winning but one driver that stands out is four-time world champion Erica Enders who has made the last two final rounds at Indy, claiming a win last year following a runner-up in 2019. Enders also won here in 2015 so her place in Indy lore is secure.

At the last event in Topeka, Dallas Glenn raced to his second win of the season in his RAD Torque Systems Camaro and he certainly going to be among the favorites this week. The same could be said for his teammate, Greg Anderson, who comes into Indy as the championship leader. Currently, the only Pro Stock drivers who have officially locked up their spots in the Countdown are Anderson, Aaron Stanfield, and Enders. 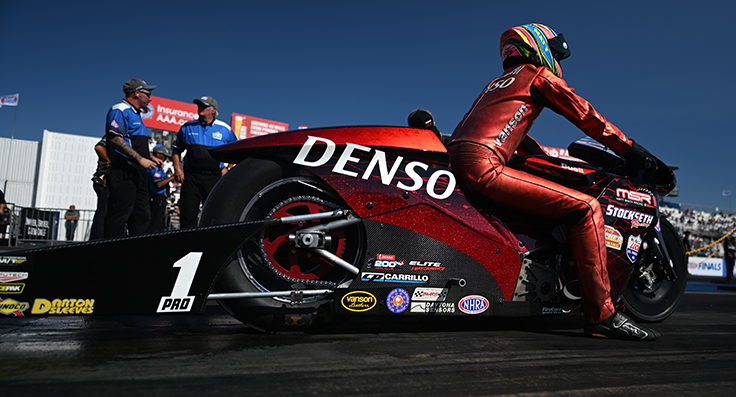 The Pro Stock Motorcycle team have also enjoyed a long summer break following their last race in Pomona, so they are more than eager to return to action at Indy. As much as Steve Torrence has dominated Top Fuel this season, reigning and four-time champion Matt Smith has enjoyed similar success in NHRA’s two-wheel class. Smith has clinched his spot in the championship and he’s just about guaranteed to be the top seed.

Following Smith is the surprising Steve Johnson, defending Indy winner Scotty Pollacheck, and three-time world champion Angelle Sampey. In the battle to make the playoffs, Cory Reed is currently 11th but he’s only seven points behind No. 10 Andrew Hines so that’s a battle worth watching as the weekend unfolds.

The other highlights from Friday will be the annual JEGS Allstars race that brings together the best Lucas Oil Series sportsman drivers from across North America. The Allstars will be competing for both individual and team honors and a prize pool of nearly $150,000.

The Mopar Hemi Challenge will also take place on Friday with a fleet of vintage Dodge Dart and Plymouth Barracuda factory Super Stock race cars set to race for a $15,000 bonus and the coveted SS/AH class trophy. Stephen Yantus has returned to defend his 2020 Hemi Challenge title with four-time winner Jimmy Daniels also in the mix.

The Dodge//SRT U.S. Nationals will also feature action in the E3 Spark Plugs Pro Mod Series and the Constant Aviation Factory Stock Showdown as well as a full roster of competition in the Lucas Oil Series sportsman categories.

EVENT SCHEDULE:
NHRA Camping World Drag Racing Series will feature one round of professional qualifying at 6:30 p.m. ET on Friday, Sept. 3, and the final two rounds of qualifying on Saturday, Sept. 4 at 1 and 4:15 p.m. Final eliminations start Sunday at 11 a.m.