The NHRA Camping World Drag Racing Series returns to zMAX Dragway for the second time this season, this time in the traditional two-wide format and as the second event of the Countdown to the Championship playoffs.
17 Sep 2021
Phil Burgess, NHRA National Dragster Editor
Race coverage

The NHRA Camping World Drag Racing Series returns to zMAX Dragway for the second time this season, this time in the traditional two-wide format and as the second event of the Countdown to the Championship playoffs.

The teams are on their third of four straight weekends of racing that began two weeks ago at the regular-season-ending Dodge//SRT NHRA U.S. Nationals and was followed by the Countdown opener in Reading last weekend.

Reigning Top Fuel world champ and current points leader Steve Torrence didn’t win in Reading, but he enters the zMAX event the proud processor of an unbeaten streak at the track that stretches back five events, to the spring 2019 Four-Wide Nationals there.

After building an extraordinary lead in the regular season with eight wins in 13 events, Torrence’s current lead over 2017 world champ Brittany Force is just 12 points – or less than a round’s worth of racing – after the Countdown points reset.

Force has been the No. 1 qualifier in Top Fuel at the last seven events but has only cashed in once – with her famous Funny Car father, John, in Topeka, and Torrence has qualified in the top four at every event and has had better race-day success.

The last Top Fuel driver not named Steve Torrence to win in Charlotte was Doug Kalitta four years ago, and Kalitta would love to revisit the winner’s circle to claim what would be his milestone 50th career win.

The biggest pre-race news of the event surrounds the other nitro-fueled world champ, Matt Hagan, who is returning to the cockpit after missing the last two events after testing positive for COVID-19. Hagan’s former Don Schumacher Racing teammate Tommy Johnson Jr. may have saved Hagan's season by subbing for him last weekend in Reading and taking the car to the winner’s circle and, per NHRA’s COVID-19 rules, earning points for Hagan.

Hagan sits in second place, just five points behind 16-time world champion and Reading runner-up John Force with Ron Capps just 10 points behind Hagan in what is still a supremely tight battle. Force won the spring four-wide event in Charlotte, where five different drivers have visited the winner’s circle in the last five events there. 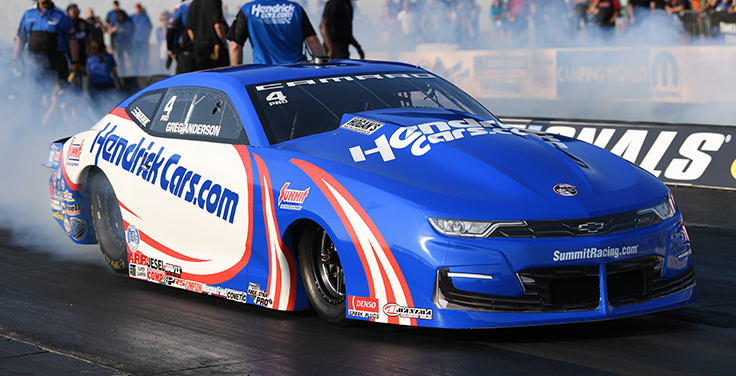 Perhaps the biggest news that could happen on race day is in Pro Stock, where Greg Anderson could surpass class icon Warren Johnson as the category’s most prolific winner. Anderson won in Reading for his 97th career title to tie W.J., and a victory in his hometown would move him into sole possession of the lead.

Regardless of whether he wins or not, Anderson’s position won’t be challenged for a long time – perhaps ever – as the next closest active driver is Erica Enders, who has 32 wins in the class, including her most recent triumph at the U.S. Nationals.

Anderson defeated Enders in Reading to claim the win, but the sledding may be tougher in Charlotte, where Anderson has not won since 2012. That being said, there hasn’t been a repeat Pro Stock winner in Charlotte since 2016. Rookie Dallas Glenn won the four-wide event in Charlotte earlier this year, and he and a fast group of young drivers, including Kyle Koretsky, Troy Coughlin Jr., and mason McGaha will try to stop Anderson and Enders from extending their already-growing edge on the rest of the Countdown field.

Steve Johnson, Pro Stock Motorcycle’s longest-tenured racer with 457 starts to his credit, is still seeking his first season championship, and his win in Reading may give him the springboard to do that this season.

As he did in Reading, he’ll have to deal with the suddenly red-hot Eddie Krawiec, the U.S. Nationals champ whom Johnson defeated in the Reading final. Krawiec’s fast black machine has come to life over the last two races as he guns for what would be a fifth world championship.

Krawiec sits third in points, just 36 behind Johnson and only 24 behind reigning world champ Matt Smith, whose vaunted red EBR won four early-season races but has fallen short in the last two despite continuing to set the speed pace at more than 200 mph.