News and notes from final eliminations at the Denso Spark Plug NHRA Four-Wide Nationals at The Strip at Las Vegas Motor Speedway.

Clay Millican (3.758) and Billy Torrence (3.765) advanced out of the first quad, besting Jim Maroney and Todd Paton, who backfired the blower in a flash of fire just off the line in Terry Haddock’s entry.

Kalitta Motorsports teammates Doug Kalitta (3.751) and Shawn Langdon (3.756) then both moved into the second round at the expense of Troy Buff and Rob Passey. By the way, with Gatornationals Top Fuel winner Josh Hart not in attendance, Gainesville runner-up Langdon is now the points leader. 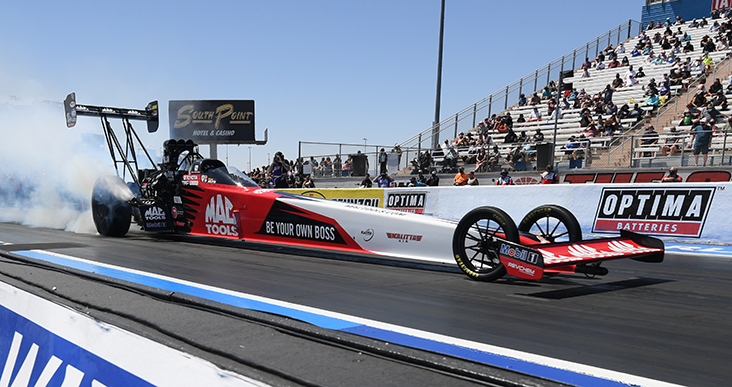 In the round’s only three-car matchup, Brittany Force reset her qualifying low e.t., improving by a hundredth to a 3.722 to finish ahead of Antron Brown’s 3.82 while Justin Ashley, despite leaving first as he almost always does, finished third with a 3.89.

Steve Torrence ran 3.756 and Leah Pruett 3.808 to advance ahead of Greg Carrillo and Cameron Ferre, who was wheeling the Worsham family machine. Both Torrences are hoping to give "Momma Kay" a big birthday gift today, as they're on opposite sides of the ladder. Steve turned 38 yesterday and Billy has a birthday later this month.

Sixteen-time world champ John Force won his quad with a 3.923 and was joined in round two by reigning champ Matt Hagan (3.932). Blake Alexander went to the trailer despite a 3.95 in Jim Head’s entry while rookie Chris Morel finished fourth with a 4.20.

“It had a cylinder and out and was going left on me, pushing me to the wall. I could see J.R. Todd to my right, but you can’t see to the left, and it’s raceday so you keep going," said Hight. "It wasn’t running bad but put a cylinder out and that’s probably what did it. Not much I can do about it. We have a lot of work to do on this Auto Club Chevy, but I think we can get it fixed and back up here for the next round."

Tim Wilkerson and Alexis DeJoria both advanced out of the third quad with respective runs of 3.91 and 3.95 to finish ahead of Terry Haddock’s respectable 4.06 and Chad Green, who never got staged after an impressive 3.92 qualifying run.

Bob Tasca III (3.917) and Ron Capps (3.932) added their names to the semifinals with solid passes. Second-generation racer Bobby Bode made his first three-second pass, a 3.993, but finished third while Jim Campbell had to step off early and finished fourth.

“I can’t thank my crew enough,” said Bode. “We hurt two motors this weekend and we were here until 1 a.m. last night, the last crew to leave. The results were there for us today with a 3.99 and even though we lost it’s unbelievable.”

Class rookie Dallas Glenn kicked it off when he pulled off a major upset to collect his first round-win in just his second start as he and Erica Enders advanced to round two with respective passes of 6.65 and 6.66, both finishing ahead of Troy Coughlin Jr., who lost on a double holeshot with the quad’s best run, a 6,64. Kenny Delco finished fourth.

The holeshot madness continued in the next quad as Chris McGaha won on a TRIPLE holeshot, his 6.685 finishing ahead of second-place Kyle Koretsky’s 6.660 and the 6.672 of Aaron Strong and the 6.676 of Alex Laughlin.

McGaha’s son, Mason, then pulled off a multi-holeshot win of his own, his 6.693 beating second-place Deric Kramer’s 6.676 and Matt Hartford’s 6.659 to the stripe for a double-holeshot win. Cristian Cuadra trailed with a 6.72. Father and son McGaha will ace off in one of the semifinal quads.

Low qualifier Greg Anderson reset his 6.638 low e.t. with a 6.633 to win the final quad, where he was joined by Aaron Stanfield, who clocked a 6.652. Val Smeland finished third and Fernando Cuadra fourth.

Angelle Sampey reset low e.t. of the meet with a 6.889 but finished second to Scotty Pollacheck’s holeshot-aided 6.928 in the opening quad. Jerry Savoie finished third. 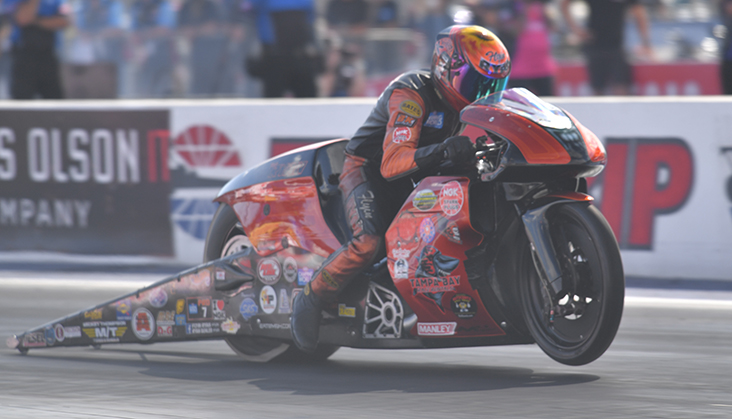 A holeshot also decided the next winner as Ryan Oehler, who recovered nicely from a trip into the sand trap Friday, beat the Denso EBR of Angie Smith to the stripe, 6.971 to 6.944, but both advanced, Kelly Clontz finished third.

Chip Ellis also won his quad on a 6.95 to 6.93 holeshot over second-place Steve Johnson with Fred Camarena headed to the trailer for the day.

Matt Smith regained his low e.t. by a thousandth of a second with a 6.888 in winning the final quad. Cory Reed joined him in the next round with a 6.985 after Karen Stoffer fouled with a -.010 reaction.

Steve Torrence, winner of four of the last five four-wide events, advanced to yet another final round, beating perennial championship rival Doug Kalitta on a 3.77 to 3.76, but both will advance to the final round. Leah Pruett and Kalitta’s teammate, Shawn Langdon, both smoked the tires shortly off the line.

The Torrence team’s hopes for two cars in the final were dashed when father Billy left before the Tree was activated. Antron Brown won the quad with a 3.76 while 2019 Charlotte four-wide runner-up Clay Millican eked past Brittany Force for the final transfer spot on a 3.816 to 3.815 holeshot. 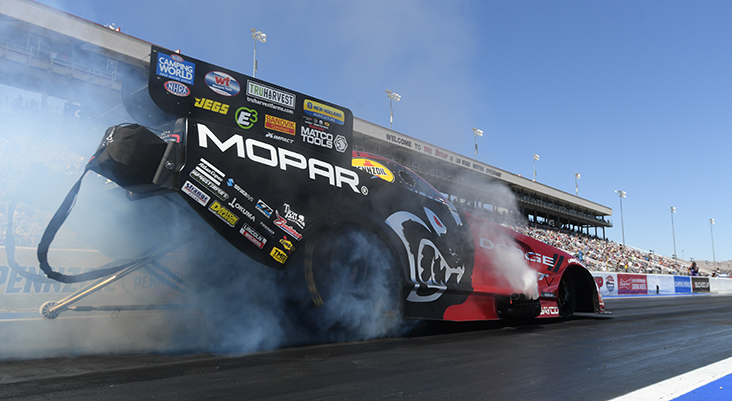 Reigning world champ Matt Hagan, winner of the 2013 four-wide event in Charlotte, advanced to the final round with a 3.927 alongside 2016 winner Tim Wilkerson’s 3.947. John Force (4.04) and Alexis DeJoria (4.25) had their days ended. The quad was interesting as it featured one car from each major manufacturer: Dodge (Hagan), Ford (Wilkerson), Chevrolet (Force), and Toyota (DeJoria).

Ron Capps, the 2017 Charlotte four-wide champ, won the other quad, beating Bob Tasca III to the stripe on a holeshot, 3.935 to 3.934, as both advanced to the final round. All four cars ran in the threes, with Hight, after a heroic thrash by the Auto Club team, losing with a 3.951 and Todd falling with a 3.983.

Deric Kramer won the first semifinal quad handily with a 6.660 and Mason McGaha stole the second final-round transfer on a holeshot, 6.718 to 6.692 over Kyle Koretsky; McGaha’s light was .025 to Koretsky’s .054. McGaha’s father, Chris, finished fourth.

Low qualifier Greg Anderson lost his bid for a third four-wide win, falling on a double holeshot to Aaron Stanfield’s 6.663 who in turn had holeshot Erica Enders’ 6.659 for the win; both Stanfield and Enders advance to the final. Dallas Glenn had the best of four great lights but finished fourth with a 6.682. 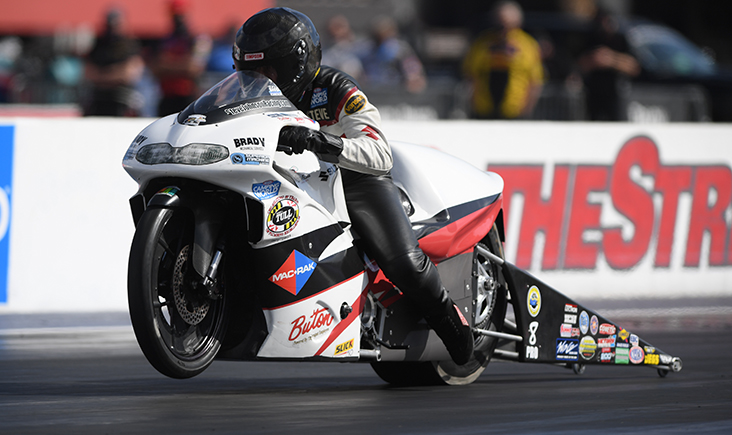 Steve Johnson, the longest-tenured Pro Stock Motorcycle rider, advanced to his first four-wide final round since the inaugural event in 2010 when he rode his Suzuki to a 6.931 to win his quad. Ryan Oehler and his EBR ran 6.98 and will join Johnson in the final after both finished ahead of Chip Ellis and Angie Smith.

The final semifinal quad featured a double upset as world champs Matt Smith and Angelle Sampey lost out to Scotty Pollacheck and Cory Reed. Pollacheck, last year’s U.S. Nationals champ, won with a 6.936 pass over Reed’s 6.972. Both Smith, the low qualifier, and Sampey, had handling problems that drew each towards one another and the centerline like motorcycle magnets. Reed, appearing in his first four-wide final, is also looking for his first career win. 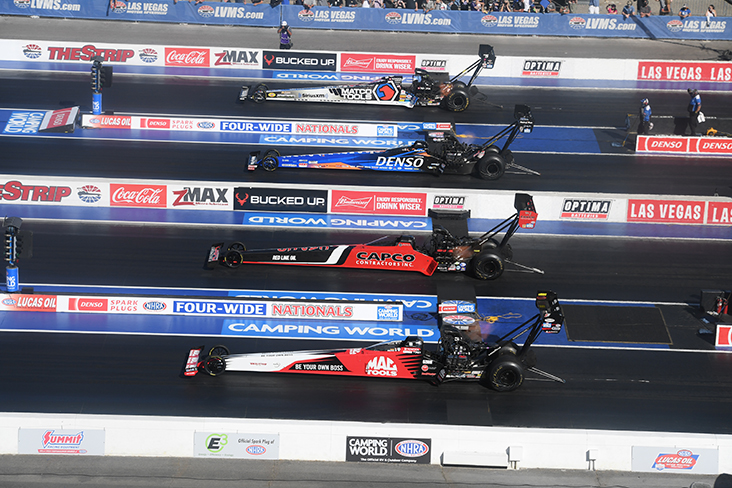 Steve Torrence continued his amazing success at four-wide events by winning for the fifth time in the last six events. Torrence was locked in a tight battle with Doug Kalitta until Kalitta’s engine went sour, allowing Torrence to eke by for the win, 3.823 to 3.866. Clay Millican finished third with a 3.914 and Antron Brown fourth. 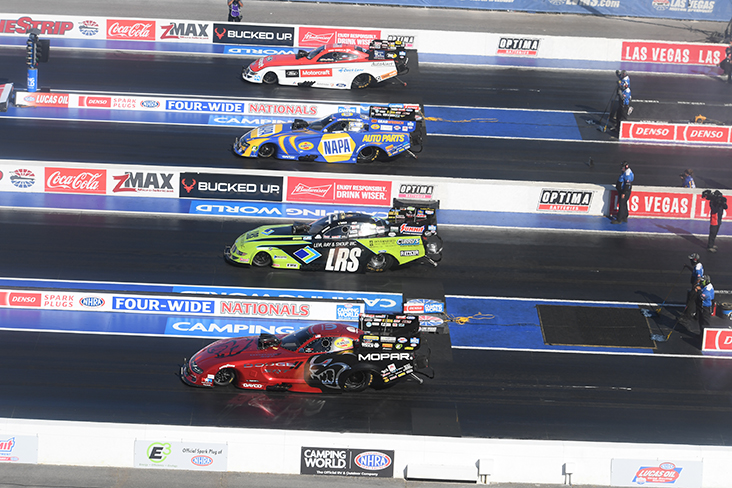 Tim Wilkerson’s 3.922 normally would have won this one easily but, hey, this is the four-wides where nothing is normal. Wilk finished third in the final, losing on a double holeshot to Bob Tasca III, who clocked a 3.938, and to Matt Hagan, who ran 3.955. Ron Capps finished fourth with a 3.978 as all four finalists ran in the three-second zone. 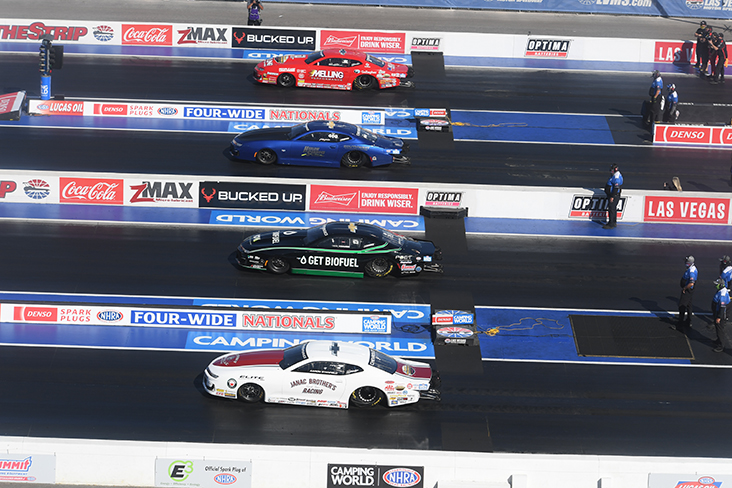 After almost failing to qualify, Erica Enders completed an impressive comeback by winning the four-wides for the second time in her career. Enders powered the Elite Camaro to a 6.656 to finish ahead of Aaron Stanfield’s 6.667 for her 30th career Pro Stock win. Stanfield nabbed the runner-up spot by holeshotting Deric Kramer’s 6.659. Mason McGaha, who had been tough on the Tree all day, took himself out of contention with a -.009 red-light. 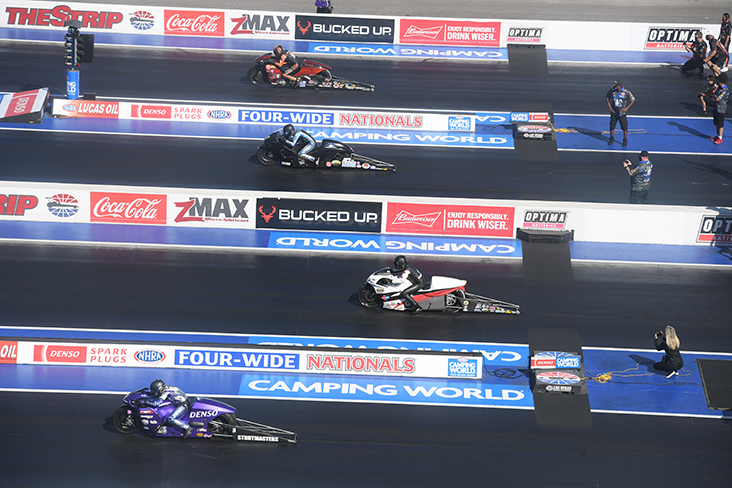 Half of the drama in the final round was over before the bikes reached 60 feet as Scotty Pollacheck fouled and Steve Johnson broke. Both could only watch as Ryan Oehler rolled to his second career win, 6.911 to 6.942, over Cory Reed, who collected his second career runner-up.