Dallas Glenn will be four races into his Pro Stock career by the time his weekend ends at zMAX Dragway and half of those races will have come in a four-wide format.
14 May 2021
Josh Hachat
Feature

Dallas Glenn will be four races into his Pro Stock career by the time his weekend ends at zMAX Dragway and half of those races will have come in a four-wide format.

That almost makes him a seasoned veteran racing in the unique aspect of four-wide racing leading into the NGK NTK NHRA Four-Wide Nationals at Charlotte, where Glenn will look to keep pushing forward during his promising rookie season.

He looked like a longtime racer at the four-wide event in Las Vegas, advancing to the second round and showing no difficulty getting adjusted to the distinctive nature of four-wide racing. He credited his experience out of the car while working with longtime standout Jason Line, but there’s nothing quite like seat time. But when Glenn got his opportunity, things came together well and he’s aiming to build on that this weekend at zMAX Dragway.

“I felt somewhat confident about it in Vegas just because I watched Jason for so many years. I do feel more confident because that first run, it did kind of shock me how well and quickly everyone staged,” Glenns said. “I almost feel like they take longer when it’s just two of them. I feel everyone is in a rush to get (staged) because they don’t want to be left out. Being that was the first experience, I’m excited about this one. We’ve made some changes to hopefully get it to run a little better and I’m excited for this weekend.” 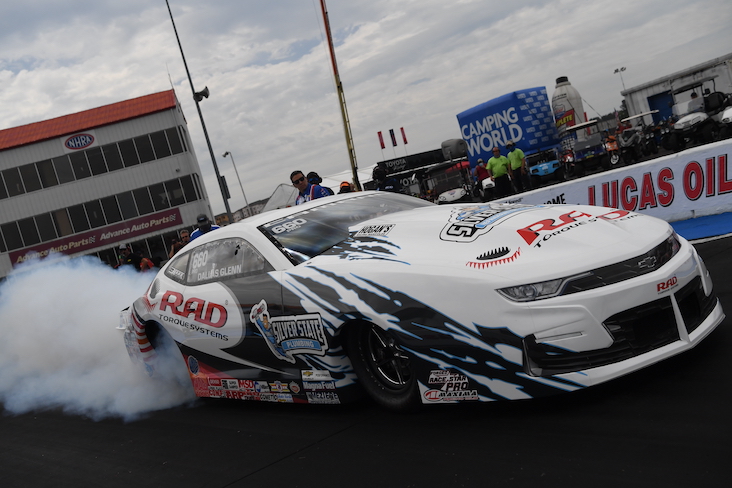 Glenn is 11th in points in a loaded Pro Stock class after three races, suffering a first-round loss in Atlanta. The team made changes to the car after that event and Glenn is excited to see what comes from that in Charlotte.

There’s been plenty of learning along the way, too. He admitted to being too aggressive in Gainesville to start the year, where he went red in his first-ever round of eliminations. Those adjustments paid off in Vegas, meaning Glenn has been a quick learner.

Of course, there’s plenty left to learn but Glenn is eager about that process, too.

“As I keep going and getting more and more runs, I’m just going to get more comfortable, especially on different tracks,” Glenn said. “Atlanta is a lot different from Las Vegas, so it’s just really cool to get to go to all these tracks that I’ve been going to for years and get to drive now.”

That goes for zMAX Dragway as well. It’s close to home, meaning Glenn will sleep in his bed at night, and it’s a chance to entertain plenty of friends and family.

What they’ll see is a KB Racing team clicking on all cylinders, led by Greg Anderson’s dominant start to 2021. He’s won two of the first three races, qualifying No. 1 at each race. That’s motivated Glenn, who has already proven to be one of the best in the class on the starting line, and he’s hungry to enjoy some of that success as well.

“All of the KB cars, even the rental customers in the engine department," Glenn said. "Everybody is running well right now. I know we’re going to get on that same level before too long. We just have to keep making steady improvements. As far as the team goes, you really couldn’t have a better start. We’re making good, clean runs and the cars are performing flawlessly, especially Greg’s car.”