Cory Reed went to his first Pro Stock Motorcycle final at the 2016 Reading event, and his teammate, Joey Gladstone, raced to a runner-up finish last year in Dallas. Today, the dynamic duo is more convinced than ever that their first wins in the NHRA Camping World Drag Racing Series are on the horizon as they head into the new season with a renewed sense of optimism and a pair of new motorcycles.

After spending the last few seasons riding a pair of EBR-bodied V-Twin motorcycles, Reed and Gladstone will be riding a pair of Suzuki Hayabusa entries that are currently being prepared by the Vance & Hines team at their Brownsburg, Ind. headquarters. The new bikes, expected to debut at the season-opening Amalie Motor Oil NHRA Gatornationals in Gainesville, will be fitted with the new four-valve cylinder head that was approved for use last season. Gladstone sees no reason why he and Reed can’t both become title contenders this season.

“This is really exciting stuff; both Cory and I are more eager about this season than we’ve been in a long time,” said Gladstone. “The new [Suzuki] program works for us. These are brand-new bikes being completely built and prepared by the team at Vance & Hines, and obviously, their record speaks for itself. These bikes are 150% Vance & Hines, build from the ground up with all their stuff. We’ll take possession of the bikes, but all the [engine] maintenance will be done in Brownsburg. Eddie [Krawiec] and Drew [Hines] are confident that they can deliver a couple of championship-caliber bikes, and we believe them.”

Currently, both bikes are in the final stages of construction, with the biggest step remaining the arrival and fitment of the new Suzuki Hayabusa bodywork. The Vance & Hines team spent more than a year developing the new four-valve cylinder head, which is expected to be used by the bulk of the Suzuki teams this season. Gladstone and Reed are hoping to take delivery of the bikes in time for a test session in Florida before the Gainesville event, which is the traditional season opener for the Pro Stock Motorcycle class. 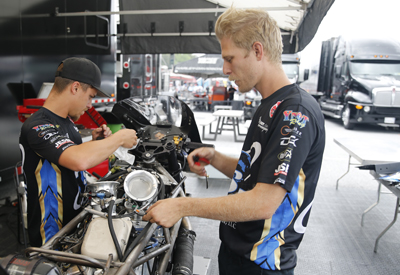 “We’re using the Gen II Hayabusa bodies, which is a modern twist on what Pro Stock Motorcycles should be,” said Gladstone. “I like the fact that the body is relevant and looks much closer to a factory bike than anything else out there. That’s good for the whole class. We still have to run the old-style GS engine cases, but the new head is modern, and it’s a work of art. We’re also using the full MoTech fuel injection, so there is a lot of new technology here.

“Right now, we expect to be racing the Suzukis in Gainesville and hopefully test a little before we get there,” Gladstone said. “If for some reason that doesn’t happen, all of our V-Twin stuff is ready to go, and it’s also fast. Either way, we’re planning on being there and being competitive. We’re out for blood this year. We both want to win and feel like we finally got everything in place to do it.”

Last year, the Reed Motorsports team raced in just a handful of events during the COVID-19-shortened season but showed promise with their V-Twin bikes. At the AAA Texas NHRA Fallnationals in Dallas, Gladstone beat Hector Arana Jr., Michael Phillips, and Angelle Sampey to reach his first NHRA final. To that end, the team has offered their V-Twin bikes to customers on a lease program and expects to have one or both of them in competition this year.

“We still own all of our V-Twin stuff; two complete bikes, and we’re excited to do a rental program,” said Gladstone. “We already have one renter lined up, and I think there’s a good chance we’ll have a second rider at some point. We’re very comfortable with our V-Twin stuff in terms of performance and reliability. Last year, we showed that we’re capable of qualifying in the top five. I was the No. 3 qualifier in Las Vegas, and we both made some very competitive runs. We also didn’t hurt an engine last year. We’re proud of that because that wasn’t always the case.”

Gladstone made his NHRA Pro Stock Motorcycle debut during the 2012 season and came into the class with a lot of promise after a very successful career that has included multiple records and championships in other motorcycle classes, including no-bar bikes, which offer a high degree of difficulty from a riding standpoint. Throughout his tenure in NHRA, Gladstone has shown all the hallmarks of a great rider, including competitive reaction times and impeccable bike control, but has had little to show for it, largely due to a lack of competitive horsepower. 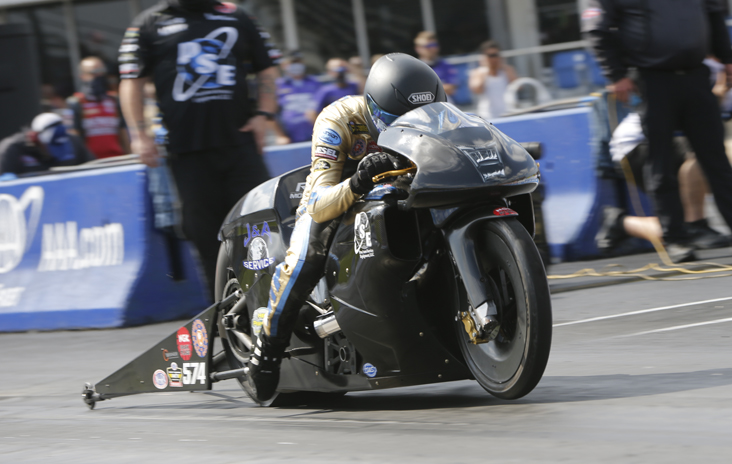 “I’d like to think I’m finally going to have a chance to show what I can do on a Pro Stock Motorcycle,” Gladstone said. “By no means am I old, but I turned 30 last year and have a family. I want to be able to do this while I’m young and can still make weight. I firmly believe that Cory and I both have the talent to do this, and this year we’ll be able to show that.

Reed left Star Racing to form his own Liberty Motorsports team before the 2017 season, and it has since undergone many changes as he seeks to build a winning organization. Previously based in Georgia and then Florida, the team is now housed in a shop near Richmond, close to crew chief and tuner Cecil Towner. Under Towner, the team made steady progress, including building and maintaining their V-Twin engines. Gladstone also credits Justin Collier and Dave Kushner, as well as Jim and Annie Whiteley of J&A Service, for their continued support of the team.

While running sporadically at NHRA events in the last two seasons, Reed and Gladstone have continued to hone their riding skills at a variety of motorcycle events. Reed followed Gladstone’s lead when it comes to diversity, riding a variety of bikes, including no-bar and grudge racing entries.

“Cory has come a long way; he’s been impressive,” said Gladstone. “We’ve been racing in the Super Stock class, which has short wheelbase bikes with a hand clutch and [manual] shifts by foot. The bikes got 8.80s at more than 160 mph, and it’s a technical class that takes a lot of finesse. Cory picked it up very quickly, and it’s the same with some of the high-horsepower nitrous no-bar stuff we’ve been racing. I can’t say exactly how quick our grudge bikes are, but they’re as quick as a Pro Stocker and require a whole different mindset. Any time you can expand your riding portfolio, it helps, and we’ve both tried to do that. Our plans for this year include a full schedule of NHRA Pro Stock stuff along with four XDA Races and some grudge events. I think we might do as many as 25 races, and I can’t wait to get started.”