Clay Millican has a new look this weekend and it’s one he wasn’t expecting, but also one he couldn’t be more excited to showcase.

Team owner Doug Stringer surprised Millican on Friday at Bristol Dragway with a special wrap dedicated to Millican’s late son, Dalton, who passed away in 2015. It’s a nod to the “Blue Thunder” monster truck that Dalton drove with blue lightning bolts along the side of the dragster and his No. 25 near the cockpit.

It all brought a smile to Millican’s face and racing at his home track at this weekend’s NHRA Thunder Valley Nationals, which is also the site of his first NHRA Top Fuel win, made it even more special.

“Doug was like, Hey, we need to sit down and go over some stuff and he positioned himself so that my back was away from them getting everything unloaded,” Millican said. “They’re rolling the car out and I didn't really think anything of it. He kind of did the look like when somebody does when they need you to look. They were rolling the car out onto the back door and 100 percent surprise, and it was one of the coolest things ever. Nobody has ever surprised me like that. For them to be able to pull this off without me having a clue was absolutely amazing.” 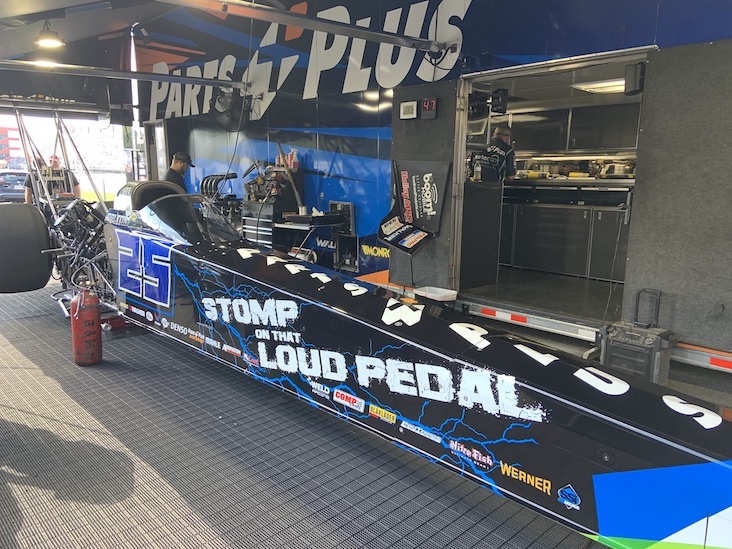 The design was originally done by a friend of Dalton’s and he presented a canvas painting to Millican on this day five years ago. To have that kind of timing on a day he debuted a new look spoke volumes to Millican.

“It is just an absolutely amazing thing that they took one of Dalton's friend's gifts to us and turned it into the real thing,” Millican said.

As if Millican wasn’t excited enough to race at his home track, this gave him one more reason. Of course, this facility has plenty of special memories for him, as Millican earned his first career NHRA Top Fuel win during the race in 2017.

It came on its traditional spot on the schedule during Father’s Day weekend, which simply added to the moment. In one of the most emotional scenes in recent memory, Millican picked up the victory in a moment that will never be topped in his mind.

Even before the win, Millican held Thunder Valley in high regard. It’s always been his favorite stop on the NHRA circuit and now he’s looking for his second win at Bristol Dragway and his first in the NHRA Top Fuel ranks with crew chief Mike Kloeber.

The duo has enjoyed incredible success outside the NHRA, but getting that first victory together in the NHRA Camping World Drag Racing Series remains a high priority. They’ve advanced to three final rounds this year, which means the only thing left to do this year is head to the winner’s circle — and Bristol may be the perfect location to do that.

“We’ve run well and we’ve had multiple final rounds this year, there's just one big box I need to check off, and that is my Kloeber and I winning a NHRA race together,” Millican said. “My to-do list is to win one of these NHRA Top Fuel races with Mike because he was my crew chief when I started my career and he’s my crew chief now.