Don Schumacher Racing’s Dodge Charger Funny Cars swept all 11 races last season, but the Charger is certainly not a new body style to the class, having been around since the class’ mid-1960s creation. Here's a look back at some of them.
22 Jan 2021
Phil Burgess, NHRA National Dragster Editor
DRAGSTER Insider

Don Schumacher Racing’s Dodge Charger Funny Cars swept all 11 races last season plus three to end the 2019 season, giving them a stretch of 14 wins on top of five world championships over the last 10 seasons, but the Charger is certainly not a new body style to the class, having been around since the class’ mid-1960s creation.
According to DragList, there has been nearly 500 Dodge Charger-bodied nitro Funny Cars over the years. From a sheer numbers standpoint, the 1970s were the real heyday for the Charger, with 223 on record as having competed, so I’m going to concentrate on the model’s first 15 years.

Like most street cars born in the mid-1960s, the Charger was a response to the through-the-roof popularity of Ford’s Mustang. Plymouth tried the Valiant fastback, which was no answer, and the Barracuda, which was only mildly successful at first. Dodge tried a Dart GT, which didn’t exactly fly out of car lots either. Because they didn’t want to compete with their sister builder’s Barracuda, Dodge engineers went about creating a new body based on its all-new '66 Coronet, giving it a swoopy roofline and a fastback finish, and they knew they were onto something.

About 37,000 Dodge Chargers were sold in 1966 but only 15,000 Chargers in 1967, so the car was restyled for 1968 with what is called “the Coke bottle" and immediately became a hit.  The '69 model was basically unchanged, save for a center grille divider and minor cosmetic changes. Nearly 100,000 ‘68 models and 90,000 ’69 models were sold. Another remake in 1971 gave it a different snout and chopped the size several inches. The Charger got internal competition beginning in 1970 from the new Challenger but still sold well and was a favorite on the dragstrip as a Funny Car design, thanks to its narrow nose and overall good looks.

The 1966-67 Chargers were obvious by their fastback styling, as shown on this Logghe-built early Charger by Dodge stalwart Roger Lindamood on one of his early Color Me Gone machines.

Roland Leong’s first Hawaiian Funny Car wore a Charger skin, but the wide-bodied machine never handled right, according to Larry Reyes, who was the pilot when it took off and crashed at the top end at the 1969 Winternationals. "I never felt comfortable in that car,” he said. ”We made burnouts at Orange County Int'l Raceway during the week before the Winternationals, and it just didn't feel right. A spoiler was added to the nose on the night before Winternationals qualifying. All that did was take more weight off the rear tires and made the handling even worse. I was so disgusted because I had never wrecked a car before.” Leong built a so-called “mini-Charger” for match racing, but it was outlawed for NHRA competition, so he and Reyes came back with a more refined full-sized Charger for the 1970 season (below) and won the Winternationals. Read more about it here in this 2016 column I wrote.

A lot of match-race teams did opt for the “mini-Charger,’ which was pretty much a 7/8th-scale version of the original that was more aerodynamic and handled better. Phil Castronovo and the Custom Body team (above) and Gary Dyer and the famed Mr. Norm’s team (below) were among them. 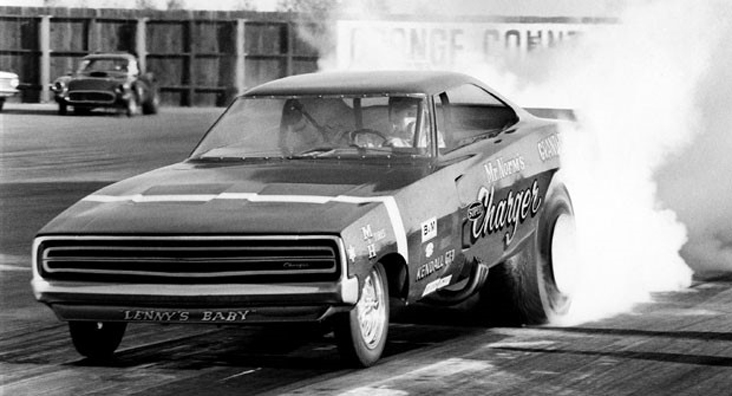 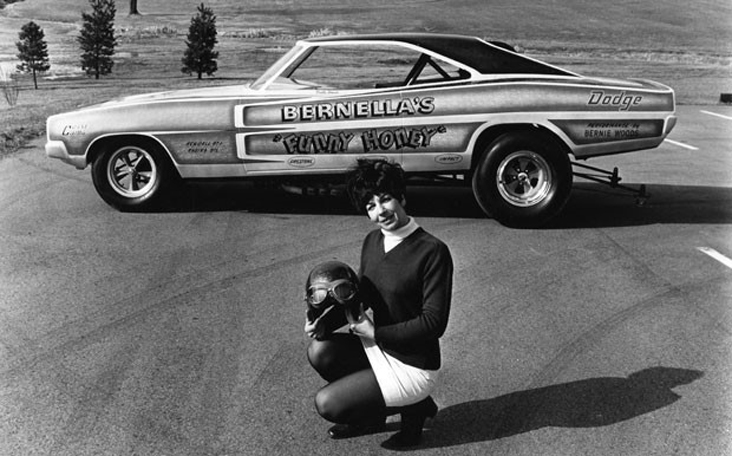 Pioneering female fuel racer Della Woods and brother Bernie also had a Charger, their memorable Bernella’s Funny Honey machine in 1969 (Bernella being a combination of their first names). Woods, who had campaigned a Super Stock Polara before switching to Funny Car, earned her license in 1968, signed off by Lindamood, Don Garlits, and Don Kohler. At the 1969 Winternationals, she became the first woman to have her entry accepted by NHRA to compete in a Pro class, but she ran only through 1971, retired for a decade, then made a comeback in the ex-Fighting Irish Trans Am in 1981. Until Ashley Force Hood reached the final of the 2007 fall Las Vegas event, Woods’ semifinal finish at the 1985 Keystone Nationals was the best performance by a female in the class.

Of course, the burnout king, the Farkonas-Coil-Minick Chi-Town Hustler, was the most famous and well-traveled of these '69 Chargers, performing virtually nonstop (and winning most of the time) at match race dragstrips across the country. 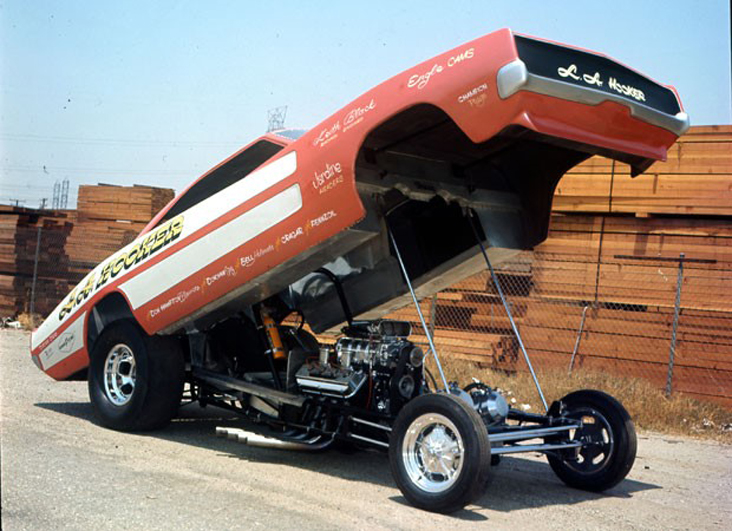 The famed SoCal-based L.A. Hooker Funny Car reportedly got its name in response to the Chi-Town Hustler, and looking at this first Hooker, you might think based on the paint scheme that they took the old Hustler, too, but in fact, driver Dave Condit and tuner Gene Beaver bought this Charger, the former Super Chief entry, from Nelson Carter.

Don Garlits in a Funny Car? Well, no, not quite, though "Big Daddy" did lend his name to car owner Bud Richter and driver Gary Bolger for booking power (and a percentage of said bookings) in 1971. This deal, brokered with the Chicagoland Dodge Dealers network by super-agent Ira Litchey, didn’t last long.

Gene Snow was an early adopter of the Charger body and ran two of them, with hired gun Jake Johnston in the second Rambunctious entry. Snow was a rabid innovator, experimenting with direct drive and the early Crowerglide clutches and even had Johnston in an experimental car that ran bottled air into the engine in lieu of a supercharger. You can tell this is the newer generation of Charger by its longer, sleeker nose. 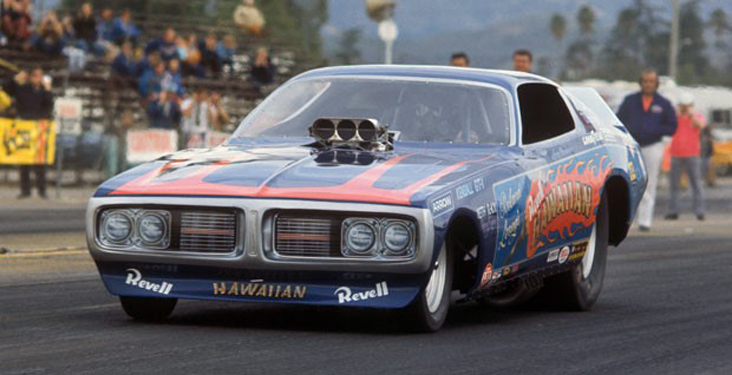 Leong campaigned Hawaiian Chargers up through the 1974 season (before switching to the more popular Monza) with drivers like Leroy Chadderton (pictured), Denny Savage, Mike Van Sant, Gordie Bonin, and Bobby Rowe [and many more]. 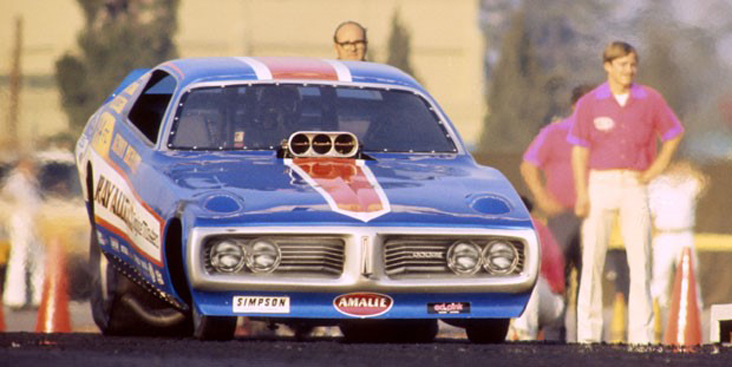 Kenny Bernstein switched from Top Fuel to Funny Car in the early 1970s, partnered first with Ray Alley and his Engine Masters machine, including an early Cougar and this Charger. At the 1973 Winternationals (pictured), Bernstein was leading Don Schumacher in the Funny Car final — his first-ever final-round appearance — until the blower belt broke. He wouldn’t win his first race for another four years, at the 1979 Cajun Nationals, where he drove the Chelsea King Arrow past John Force, who was appearing in his first final. Force had to wait 10 more years for his first win.

The number of Chargers dropped precipitously in the 1980s to just 64 total (compared to 54 that ran in just 1966-69 alone) as the Charger was downsized, but did enjoy success with the Charger-loyal Chi-Town crew that won the 1982 and ‘83 world championships in the smaller Charger 2+2 model. 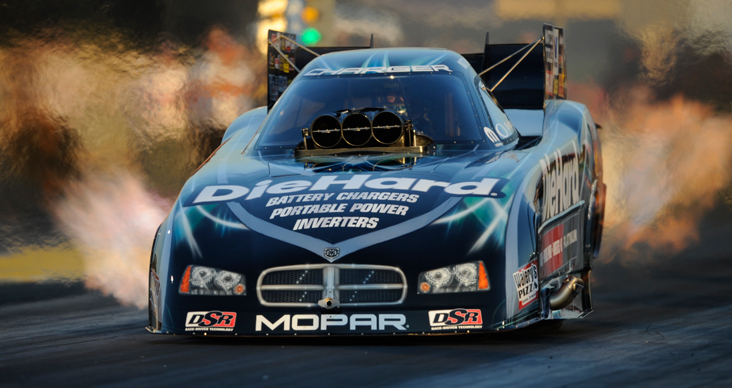 Chargers disappeared completely from car lots after the 1987 model year (and from the Funny Car pits throughout the 1990s) and didn’t make a comeback until DSR cut its deal with Dodge, and we saw new sixth-generation Chargers in 2006 for the likes of Whit Bazemore (Matco Tools) and Ron Capps (Brut). Even throughout the last 10 years (2010 to 2020), there were only 121 Chargers in the class, or roughly about half as many as the 1970s. Granted, there are not as many, but they’re more successful than their previous counterparts. Matt Hagan’s first championship, in 2011 was the first for a Charger since the 1980s Chi-Town Hustler, and, as I mentioned earlier, they’ve won five of 10 championships since.