The challenge of the new four-valve Suzuki engine has given Pro Stock Motorcycle's Steve Johnson such a surge of energy that sleep is apparently optional.
15 May 2021
Josh Hachat
Feature

Between Atlanta two weeks ago and this weekend’s NGK NTK NHRA Four-Wide Nationals at zMAX Dragway in Charlotte, Steve Johnson got acclimated with plenty of late-night television.

Working literally around the clock to keep progressing on his new four-valve Mac Rak Suzuki, he’s spent most of his time in his race shop, catching a few hours of sleep almost every night before jumping back at it by 7 a.m.

Johnson, though, isn’t complaining. The challenge of the four-valve engine has given the veteran such a surge of energy that sleep is apparently optional. 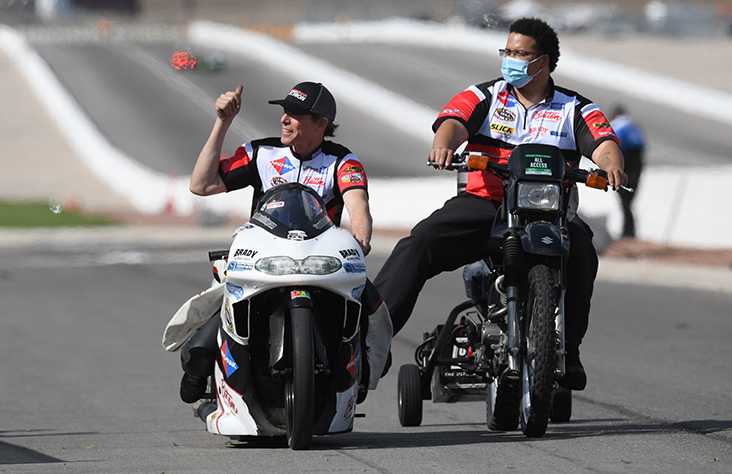 Even while things are a work in progress, Johnson has put together strong results. He advanced to the final quad at the four-wide race in Las Vegas, qualifying third there, and posted a solid effort in Friday’s lone qualifying session in Charlotte, going 6.836-seconds at 197.33 mph.

That has him fourth with two sessions remaining on Saturday at zMAX Dragway, putting him in a solid spot early in the season. Just as exciting is the potential and the vast amount of learning needed to thrive with the four-valve engine.

It’s also reinvigorated Johnson, who has six career wins in the class, to the point where all he wants to do is learn and apply it to his bike.

"It’s fascinating. I’ve been in the sport a long time and this is fascinating, and I’ll tell you one thing: when you stand around and listen to people, you learn a lot more than when you’re talking,” said Johnson, who is currently fifth in points. “I’m learning from listening to people.

“It has so much torque, it’s hard to get it off the line. I’m struggling with that and I’m constantly inside the engine, looking and learning.”

Johnson knows the potential for more is there, simply pointing to what he ran at zMAX Dragway during the fall race in 2019.

He qualified No. 1 with a 6.786 riding a two-valve Suzuki and Johnson unequivocally knows the four-valve engine has far greater potential.

With favorable conditions the rest of the weekend, Johnson should have a chance to get close or eclipse that number. But even if he does that and enjoys a successful event, the learning process won’t stop — and that might be the most exciting thing for Johnson.

“The first thing that I see is that I continually get challenged by this new engine,” Johnson said. “It’s one of the most exciting things I can do, trying to be the quickest, and I can see changes and the changes teach me the mistakes I make.

“Clearly we’re on a new path on tuning this engine, so I think it’s an opportunity to run better, that’s for sure. At the end of the day, it can run faster. The four-valve has got to go faster and until it does, the tuner and the rider aren’t doing their job. “