Cameron Ferre anxious for next step in nitro journey

Following a semifinal finish at the season-ending Auto Club NHRA Finals in Pomona, no one is more excited for the start of the 2022 season than Cameron Ferre.
15 Dec 2021
Kevin McKenna, NHRA National Dragster Senior Editor
Feature

Cameron Ferre already knows the thrill of winning an NHRA national event Wally; He took care of that nearly a decade ago when he won the Super Comp title at the 2021 Auto Club Finals in Pomona. He’s now got his eyes set on a slightly bigger prize; a victory in Top Fuel.

Don’t laugh, it could happen. In fact, it nearly did.

In his most recent outing at the Auto Club NHRA in Pomona last November, Ferre went to the semifinals behind the wheel of the Paton family’s EMPI-backed dragsters. Ferre came up short against four-time world champion Steve Torrence by just six-thousandths of a second. Had he won that round, there is no telling what could have happened in the final.

“Six thousandths; we almost did it,” said Ferre. “I think it shows that we aren’t as far away as people might think. Our plan whenever we show up is to give them a solid run for their money. With the Paton team we’ve not got a car that can run a low 3.80 or high 3.70 and that puts you in the game. You don’t have to rely solely on luck to win. If I can get a little bit on the Tree or someone misses the tune-up, we can be there to take advantage of it. In Pomona, that plan worked out well, but the clock just struck midnight in the semi’s.” 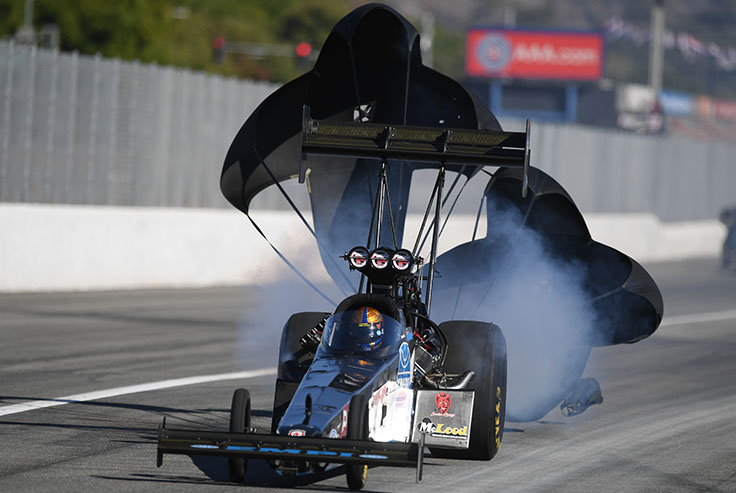 Ferre’s path to NHRA’s top tier is a familiar one. Much like current regulars Leah Pruett and Shawn Langdon, Ferre won a championship in the Jr. Dragster Series and also has his aforementioned national event win in Super Comp. Like Pruett, he’s also raced in the Hot Rod Heritage Series, but his goal has always been Top Fuel.

“I feel like I’ve won or been successful in every step of my career, but it’s just taken me a little longer than I wanted to get to where I want to be, which is a full-time pro in Top Fuel,” Ferre said. “It’s a hard thing to do. You just have to keep pushing, waiting for the right opportunity to come along.”

For Ferre, the right opportunity could easily be his current ride in the dragster campaigned by Todd Paton and his family. Ferre and the Paton’s had hoped to race together in 2020, but COVID had other ideas. The entire Paton team is based in Canada, and they were unable to cross the border for much of the 2020 and 2021 seasons.

By October, border restrictions were relaxed and Ferre inked a sponsorship agreement with EMPI, a leading manufacturer of aftermarket Volkswagen products. That deal provided the funding to compete in the final three races in Bristol, Las Vegas, and Pomona. Progress was evident at all three races, culminating with the semifinal finish and a career-best 3.796 to end the season on a high note.

“I’ve been working on this deal for quite some time,” Ferre said. “We were planning to do a lot more races together, but COVID got in the way. The one good thing is that 98-percent of the Paton team is Canadian and even though we weren’t racing, they were in the shop working on the car. This crew has been together for a long time and they’ve jelled well with each other. They know the ins and outs of this car and you can’t underestimate how big that is in nitro racing.

“We’ve also got a lot of the right parts and pieces,” Ferre said. “Stewie [veteran crew chief John Stewart] helps us and he’s been with the Capco guys so that’s a big plus. My whole goal in Top Fuel has been to find something I can win in and this is by far the best shot I’ve had so far.” 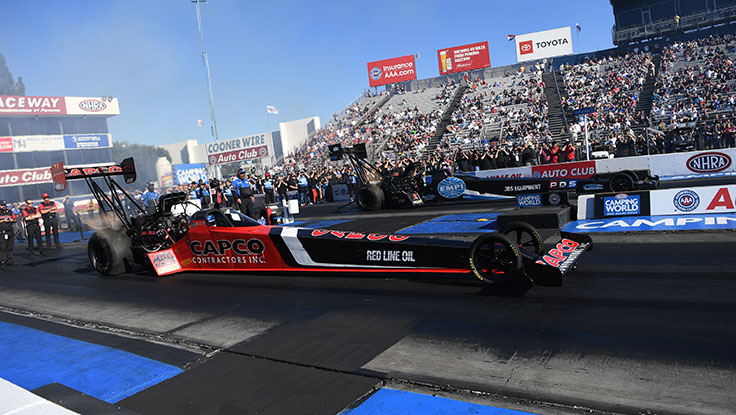 Fair or not, it’s hard not to ask Ferre about the now famous dust-up he had with Steve Torrence during the 2019 Auto Club NHRA Finals in Pomona. Following their round one race, the heated exchange was captured live on the Fox Sports television show. In the aftermath, Ferre and Torrence have actually become quite good friends, and the mutual respect they have for each other was captured following their semifinal race this year in Pomona. For better or worse, Ferre agrees the incident helped make him recognizable to NHRA fans who might not otherwise have noticed him.

“That whole deal was so blown out of proportion,” he says. “We’re completely fine now and Steve and I actually talk more often than most people would think. We all make mistakes, and we all grow up and we learn from them. It was a high-pressure situation where he was trying to win a championship and I was just trying to do what I needed to do to win a round. I guess in some way I have picked up some support since that day and it’s helped my career, but I still prefer the last time we raced where we congratulated each other with a high five.”

Turning his attention to 2022, Ferre has some fairly ambitious plans that include the possibility of 6-8 races with the Paton team most likely beginning with Pomona. Freer’s sponsor, EMPI, was thrilled with the exposure he provided with his recent semifinal finish, so they’ll likely be back for next season.

“Right now, I’m not 100 percent sure what we’re doing but I think there’s a good chance we’ll do 6 to 8 races,” Ferre said. “I was told by Todd [Paton] that I should plan on being ready for Pomona. If I had the right opportunity, I would be at every single one of them but we’re trying to race smart and run well when we do show up.

“It’s so cool to bring and iconic brand like EMPI back to drag racing. They were thrilled by what we accomplished last year. In Bristol and Las Vegas we qualified and then the whole semifinal deal in Pomona.

“I spend a lot of time researching companies and trying to assemble a program that works. They days of picking up a phone and asking for dollars are over,” said Ferre. “You need something that moves the needle and with EMPI, we have a lot going on behind the scenes. I’m married with two kids and I’m a full-time college professor [Cerritos College] but I make time for racing because it’s what I want to do.”