Brittany shared the winner's circle with her father, John, knocking off Clay Millican to pick up the victory on Sunday at the Menards NHRA Nationals presented by PetArmor at Heartland Motorsports Park.
15 Aug 2021
Josh Hachat
Race coverage

Brittany Force simply wanted her first win of the season after coming so close on several different occasions.

Getting to share it with her father, John, in a historic first simply made it that much sweeter for the Top Fuel star. Force went 3.783-seconds at 324.75 mph in her 11,000-horsepower Monster Energy dragster, knocking off Clay Millican to pick up the victory on Sunday at the Menards NHRA Nationals presented by PetArmor at Heartland Motorsports Park.

It was Force’s first win since 2019 and the 11th of her career and winning on the same day as her dad did in Funny Car made it that much more special. Brittany and John became the first father-daughter combo to win a NHRA Camping World Drag Racing Series event on the same day, adding an incredible touch to a weekend the Force family will always remember.

“This will be one I'll never forget. This has been on my bucket list for as long as I can remember,” Brittany said. “I remember there have been so many close calls where we thought hey, this could be our day that we're gonna double up. To win a race is hard enough and then to do it with your teammates, it’s almost impossible. So it's like you almost put it on the backburner. 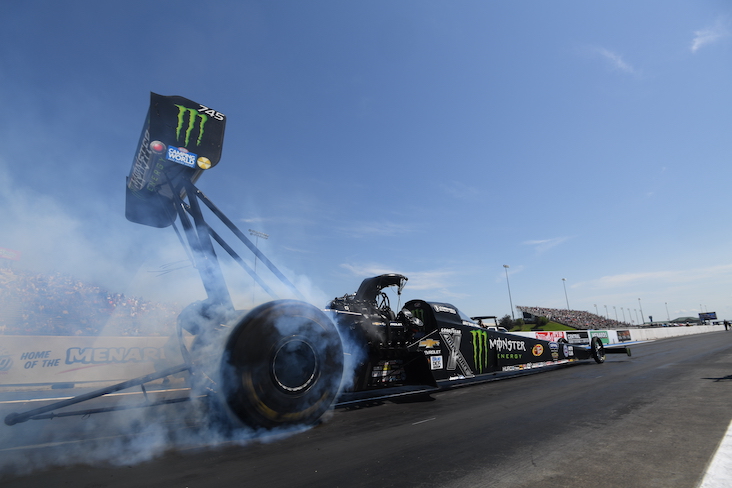 It capped off a triumphant day for Brittany, who qualified No. 1, took out the points leader, and then finished with the victory.

To reach the final round for the third time this year and the 26th time in her career, Force beat Scott Palmer and Steve Torrence. It was Force’s first win against Torrence in three tries this season, as the points leader got the better of her in the final round at both Norwalk and Charlotte. In Topeka, though, Force had enough to get past Torrence, going 3.769 at 326.24 to best Torrence’s 3.814 at 317.87.

That was a huge moment for Force, as the team finally found the winning recipe on Sunday. They had qualified No. 1 six times this year, including four straight races, but they had trouble with consistency on race day. That no longer seems to be the case, as Force moved to second in points behind only Torrence.

“it's been tough on us this season. We've had a good season, we're number (two) in points, we've had a bunch of number one qualifiers, it's just we keep getting stuck on race day,” Force said. “That's hard for a driver, crew chief, our entire team (because) that’s where you really want to excel. We have a closet full of number one hats, but we don't have those race day hats (for wins). So I knew we were getting closer. I knew it was right around the corner for us. We knew eventually our luck was gonna turn around. We had a consistent race car all weekend and just made a lot of solid passes down the track”

Millican, who started the weekend 10th in points, advanced to his first final in 2021 and 17th in his career by beating Doug Kalitta, Mike Salinas and Shawn Langdon. After posting solid times in the first two round wins, Millican caught a fortunate break against Langdon, going 4.561. It was enough to advance after Langdon ran into trouble almost immediately. Millican is now ninth in points heading to Brainerd next weekend.