A lot changed at Brainerd Int’l Raceway between Friday and Saturday including the weather which went from hot and humid to cool and dry and as a result, the top qualifying positions changed hands several times at the Lucas Oil NHRA Nationals. No one benefitted more from the change than Brittany Force and Bob Tasca III, who locked themselves into the top spots in Top Fuel and Funny Car with solid qualifying runs.

Force jumped to the top of the chart with her Monster Energy entry with a 3.675 at a stout 334.98 mph. Force’s run represented a dramatic improvement over Friday’s 3.813 and a tire-smoking shut off on Saturday afternoon. 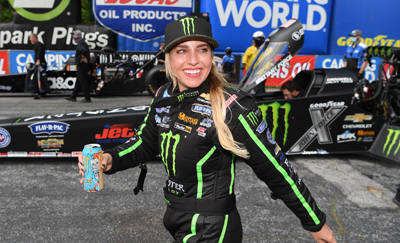 “Coming out of a win in Topeka with my dad was pretty incredible for all of John Force Racing,” said Force. “We’ve been chasing this first win all season long. We’ve gotten those No. 1 hats but we just can’t seem to figure it out on race day but we got it done last weekend and our goal is to repeat that here in Brainerd.

“There’s just a different energy in our pits. After winning and celebrating with my whole team. There is no better feeling than winning. It makes the bad days suck a little less and its just finding that again. We’re chasing Steve Torrence right now. He’s No. 1 in the points and that’s our goal for the end of the season. We’re in a good place. Coming into the season our goal we to be top three going into the Countdown and we’re No. 2 right now. We have to step it up once that Countdown begins. We go to Indy next and then it’s game on. Ever point matters and you can’t make mistakes.

Qualifying at the top of a Top Fuel field is nothing new for Force and her crew chief, David Grubnic. Force has been the leader 27 times in her career including seven times this season including the previous four races in Denver, Sonoma, Pomona, and Topeka. Force hasn’t been ranked lower than seventh at any race this season and with a short field in Brainerd, she’ll be rewarded with a bye run during tomorrow’s opening round of eliminations.

Before Force made her run, it appeared that reigning and three-time world champ Steve Torrence might have the upper hand on the qualifying lead. Torrence made the best run of Saturday’s early session with a 3.684 at 329.91 mph. He was making a similar run during Friday’s lone qualifying session but lost traction at half-track and slowed. Torrence had a shot to steal the pole from Force late in the afternoon but came up just short with a consistent 3.703 that should provide some confidence heading into Sunday’s final eliminations.

Friday’s leader, Mike Salinas, was bumped to third place even though he made a significant improvement from yesterday’s 3.75 to a 3.711. Salinas will take on T.J. Zizzo in tomorrow’s opening round.

Perhaps the two most intriguing matches of the opening round feature Team Kalitta entries with Shawn Langdon’s DHL entry going up against Antron Brown’s Matco Tools dragster in a battle of multi-time world champions. Doug Kalitta, looking to move up from the No. 10 spot in the Camping World Top Fuel standings, will have a tough draw when he faces Clay Millican’s Parts Plus dragster in round one.

Tasca has never been to a final in Brainerd but that could easily change tomorrow as he heads into eliminations with the quickest car in the stacked Funny Car field after a 3.870 at an impressive 334.15 mph in his Mike Neff-tuned Motorcraft/Quicklane Ford Mustang. Tasca, now a low qualifier at seven events in his career including two this season, led the way on Friday with a 3.941 and also ran a slowing 4.270 on Saturday’s early qualifying run. Tasca, who is looking to move back into the championship lead, will have a single run in Sunday’s opening round of eliminations.

“It’s great to be back in Brainerd with all these Ford fans. I’ve been signing autographs all day,” said Tasca. “Mike [Neff] and John [Shafer] have been a little frustrated these last couple of races. We really haven’t caught our stride like we did in the early part of the season. They’ve been working on a little different set-up and we found it last night. A little disappointed this morning. We didn’t’ have the early numbers they wanted.

“Before that [3.870] run, Neff told me this thing is going to blow the tires off or hang on because it’s going to up a run. At half-track I was celebrating because I knew it was on a big run. Straight as an arrow. We could have taken a fan out of the stands and put them in this Motorcraft Mustang on that run. We just have to do it four more times tomorrow.

“This is the best team race car that I’ve ever had in my career,” Tasca said. “We’ve got to seize these opportunities. There’s not one guy on that Motorcraft team that doesn’t know that. Going into indy with some momentum and coming out of Indy in the top three would definitely be a goal of mine. We’ve got to win races in the Countdown to win the championship and we’ve done that this year.”

Cruz Pedregon hasn’t been to a final in Brainerd since 1993 but his crew, led by John Collins, have made the last three final rounds with their former driver, Tommy Johnson Jr. Collins and crew obviously know their way around Brainerd and they proved it with a pair of great runs on Saturday including a 3.874 that is the best run of the season for the Snap-on Dodge. Pedregon’s best qualifying performance of the season had been No. 4 in Atlanta, Houston and Pomona.

A week after damaging a car in a two-car collision with Cruz Pedregon, Tim Wilkerson came roaring back with his best performance of the season with a 3.883 to take the No. 3 spot with his Levi, Ray & Shoup Mustang. Wilkerson, a Brainerd finalist in 2003, races Jim Campbell in round one.

One of the most entertaining runs of the day came from Matt Hagan and his Mopar Dodge team. Hagan left the starting line cleanly, but one of his parachutes deployed at half-track. It proved to be little more than a minor inconvenience as Hagan still ran a 3.938 at 313.73 mph with the chute blossomed.

There are at least two races in the opening round that are worthy of being called marquee matchups as Ron Capps is scheduled to take on John Force in a battle of the class’ two most successful drivers and Force’s teammates, Robert Hight, also has a tough battle against Gainesville champ J.R. Todd.

In Pro Mod, Justin Bond leads the field with a 5.757 at 248.20 in his ProCharged Bahrain1 Camaro while the qualifying leader in the Mountain Motor Pro Stock exhibition is J.R. Carr with an impressive 6.273, 223.50.