Billy Torrence opens Countdown to the Championship with impressive victory

Billy got the opening jump in the Top Fuel ranks, winning the Mopar Express Lane NHRA Nationals presented by Pennzoil at Maple Grove Raceway with a run of 3.720 at 326.08 in the final round against Justin Ashley.
12 Sep 2021
Josh Hachat
Race coverage

It was a Torrence who started the Countdown to the Championship in impressive fashion, only this time it was Billy who got the opening jump in the Top Fuel ranks, winning the Mopar Express Lane NHRA Nationals presented by Pennzoil at Maple Grove Raceway.

He went 3.720-seconds at 326.08 mph in his 11,000-horsepower Capco Contractors dragster, ousting Justin Ashley’s 3.784 and claiming the win at the first of seven playoff races in the class. His son, three-time defending world champ Steve Torrence, maintained the points lead after falling in the semifinals, but Billy made a huge move with his stellar day, jumping from eighth to third on the strength of his second victory this season and eighth in his career.

“That’s a really good team that ran really well and I had a good car,” Torrence said. “I’m certainly the weak link in my car, but they made me look good in the end. It says a lot for the boys. It’s a shame they don’t have a better driver, but the car is really good. I have a good time and at my extended age, I’m going to take all the wins I can get.”

Torrence got past Josh Hart, Shawn Langdon and No. 1 qualifier Brittany Force to reach his second final round this season and 12th his career. Taking on Force in the semifinals, Torrence put together a solid 3.725, while Force had a cylinder out nearly the entire run, slowing to a 3.777. After running in the mid-3.60s at 330-plus mph for most of the weekend, it was a tough loss for Force, and Torrence was more than ready to take advantage.

It also gave him a dragster that went 3.72 on three of the four elimination runs and 3.719 in the other, coming on the heels of qualifying with a 3.699. That’s consistency at its finest and that’s music to the ears of Torrence, who also dabbles in a Super Comp dragster in the sportsman ranks and simply enjoys being behind the wheel.

“I love to race,” said Torrence, who is just 42 points out of first. “Racing is fun and I think Steve and I would footrace if that’s all we had. You name it, we’re going to get out and race. These guys make me look good and I just try to do the best I can.” 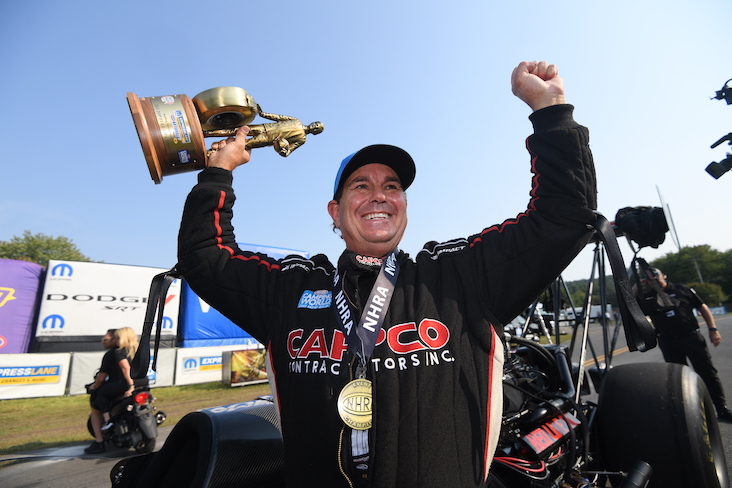 Ashley knocked off Doug Kalitta, Clay Millican and points leader and defending three-time world champ Steve Torrence to pick up his second final round berth this year and third in his career. After going 3.703 against Kalitta and 3.697 against Millican, Ashley had to fight hard against Torrence in a wild semifinal round. He smoked the tires early, but pedaled the car and got to the finish line first with a 4.084 despite dropping cylinders. Torrence, meanwhile, had to pedal twice and had more problems near the finish line to slow to a 4.162.

Ashley made a big move to fourth in points, while Force is second and trails Steve by just 12 points heading into next week’s race at Charlotte.