Two races into the Pro Stock Motorcycle Countdown to the Championship, reigning world champ Matt Smith isn’t where he wants or expected to be.
04 Oct 2021
Josh Hachat
Feature

Two races into the Pro Stock Motorcycle Countdown to the Championship, reigning world champ Matt Smith isn’t where he wants or expected to be.

But the four-time champ is also nowhere near pushing the panic button.

After dominating the regular season, winning four races, and advancing to six final rounds, the start of the playoffs haven’t had the same success rate.

Smith chalked it up to some untimely bad breaks — including a motor breaking in Reading after a freak parts failures — and isn’t about to let it distract him or avert his confidence heading into this weekend’s Texas NHRA FallNationals at Texas Motorplex.

He’s dipped to 30 points out of first behind points leader Steve Johnson — and 13 behind second-place Angelle Sampey — but the plan is for things to look considerably different by the end of the weekend.

“We want to show everyone we’ve got the bike to beat,” Smith said. “I would say things haven’t started the way we needed them to, but we have a fast bike, and I just think it was a freak thing in Reading and Charlotte. I’m not going to dwell on it. 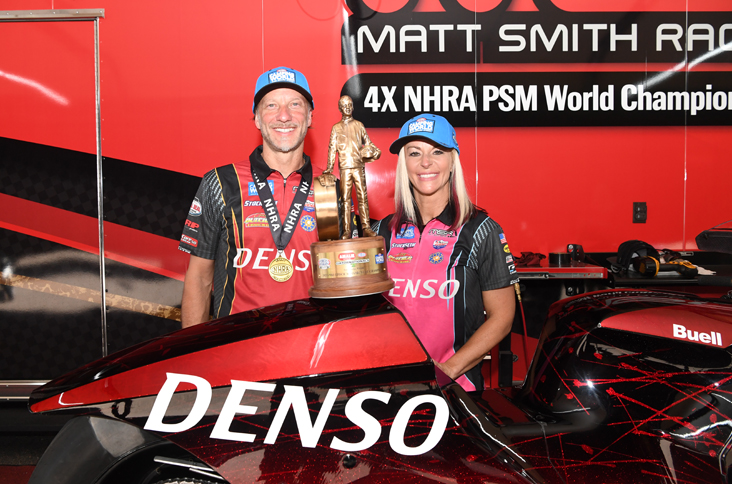 “If it was one race, then maybe I would worry, but we’ve got four races left, so I’m not worried. We’re 30 points back, and we can make that up in one race if everything goes well.”
That’s the plan for Smith, who had an uncharacteristic red-light in the second round in Charlotte to add to his unexpected start to the Countdown to the Championship.

But there are positives. He had massive speed in Reading, setting the track record, and posted the quickest and fastest run in the opening round of eliminations in Charlotte before the red-light came on.

After the engine broke in the semifinals in Reading, it has been freshened up and ready to go, and Smith will also test on Wednesday at Texas Motorplex as part of the open test session during the weeklong Stampede of Speed at the track. Combine it all and Smith is eager to win for the first time at the facility on his Denso Auto Parts/Stockseth/Matt Smith Racing EBR.

“We’re going to Dallas to win the race. We’ve got everything in place to do that,” Smith said. “We had that little glitch in Charlotte, but I’m throwing that one away. I still think we’re the quickest and fastest bike, and our goal is to go to Dallas and prove that.

“Angie [Smith] and I qualified No. 1 and No. 2 last year, so we’ve always been fast there, but I’ve never one. It’s probably one of the few places I’ve never won, so I would love to do it this year.”

Finishing strong wouldn’t surprise many who have watched Smith continually raise his game when the playoffs arrive. It’s been Smith’s calling card throughout his many championship reigns, as he’s been a master of peaking in crunch time.

It might be hard to top a regular season as impressive as the one Smith just experienced, but the veteran is counting on a big finish over the final four races.