Back in the title hunt, Cruz Pedregon enjoying the extra work it brings

Cruz Pedregon is right in the thick of things in the Funny Car Countdown to the Championship. He entered this weekend’s NHRA Thunder Valley Nationals in third and 113 points back of leader Matt Hagan with three races remaining.
16 Oct 2021
Josh Hachat
Feature

Cruz Pedregon has discovered his team has gone through parachutes and tires at a more frequent pace compared to recent seasons.

It’s one of the more unique ways the Funny Car veteran can gauge the success his team has enjoyed in 2021 and he’s not about to complain.

“That’s a good problem to have,” Pedregon said.

Indeed it is, as it means Pedregon is right in the thick of things in the Funny Car Countdown to the Championship. He entered this weekend’s NHRA Thunder Valley Nationals in third and 113 points back of leader Matt Hagan with three races remaining.

Bringing in tuner John Collins and his crew has worked wonders, with Pedregon winning in Norwalk and boasting impressive consistency as the season has progressed.

Along with that success has been a run on parachutes and tires, and it’s not the only thing Pedregon has noticed with his team going deep in eliminations.

“They say play yourself into shape in sports and, well, I've had to drive my way into shape,” Pedregon said. “I'm packing parachutes when it's 85 degrees, 90 degrees out with some humidity and you start going rounds and you're slamming parachutes. I’m dragging at the end of the day, but that's what you do when you have a car like this. I'm still getting used to all this stuff, but to pull up there knowing you can run with any of these cars and be consistent, it’s nice to wear out the parachutes.”

Chasing down Hagan will be a challenge, but Pedregon, a two-time world champ, is simply thrilled to be back in the hunt again, another sign that things have worked almost flawlessly with Collins. It took some time for everyone to get acclimated, but they’ve clearly found their groove as of late.

Pedregon has advanced to at least the semifinals at five of the past six races, including final rounds at Brainerd and Charlotte. Pedregon is after wins, but he’s excited about the consistency the team has put together during the playoffs.

“I'm enjoying this and that being said, I'm breaking some habits that I had with even driving the car,” Pedregon said. “I didn't realize the differences in the way that cars handle and the way they accelerate, so it's been a process for me. But it’s been a welcome change be honest with you. JC and the guys do their thing, and I make sure this car has the parts and equipment that we need to go fast and not hold anything back. We’re going to swing for it, so let's not hold back.” 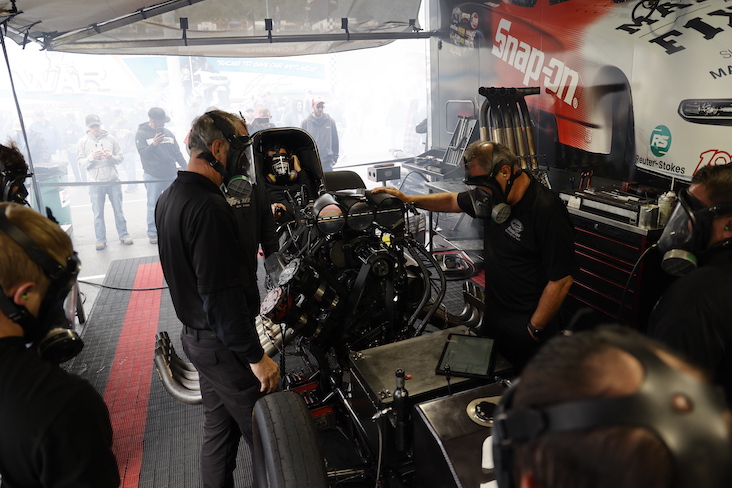 That is certainly the mindset this weekend, especially with the expected conditions on Saturday to close out qualifying and in eliminations on Sunday.

It's the first time racing at Bristol Dragway in October, which poses a challenge, but with temperatures slated to be in the high 50s and low 60s on raceday, there could be big numbers to be had. If Pedregon’s team finds a tuneup, they could be dangerous and make the championship race that much more interesting heading down the stretch.

“I have confidence that JC has a big enough data book that he can look back at runs he's made in similar conditions,” Pedregon said. “Each track has its own little characteristics. This one has what they call the tunnel bump, which I always feel like things like that add character to the track. We’ll navigate that and this will be ideal or near-ideal conditions. It’ll be interesting to see how fast we can go on a cooler track. We just need to continue to do what we're doing and then we'll make our own luck as we go.”