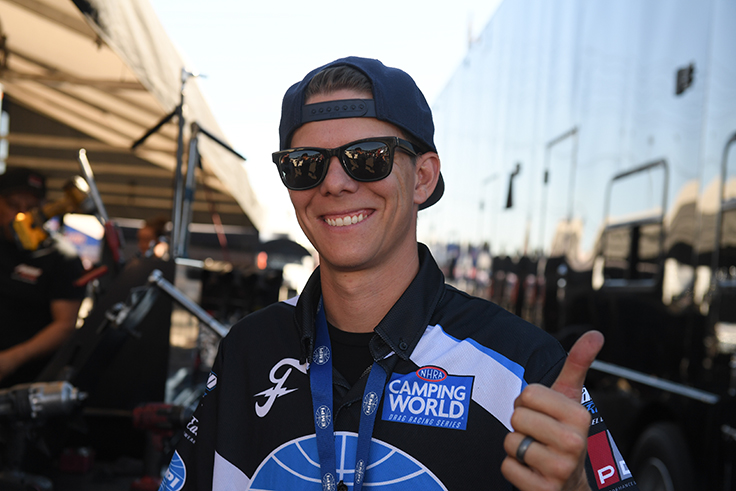 The championship drama lasted only four airs into the first round as Steve Torrence defeated Brandon Welch to clinch his fourth straight championship. Second-place Brittany Force's only hopes were a loss by Torrence and to win the race, but she never got to fire a shot in her own defense. As it turned out, the championship would have been his anyway as Force smoked the tires tires against Torrence's father, Billy, in the last pair of the round. 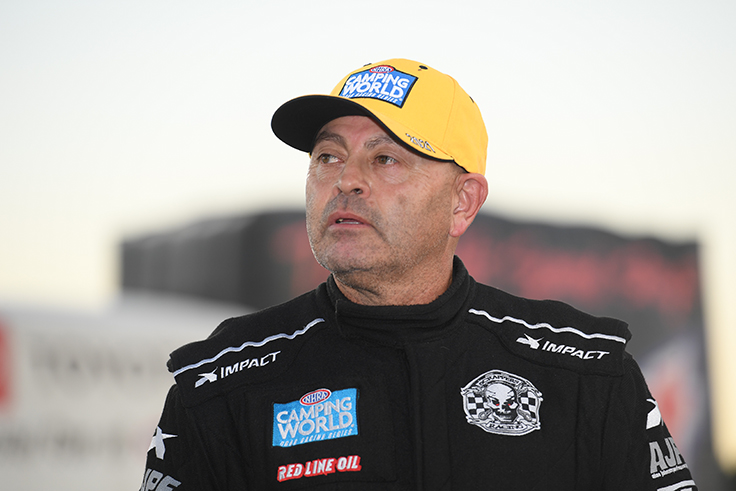 Low qualifier Mike Salinas advanced past Steve Chrisman and will set his sights now on passing Force for second place in the standings. If Salinas can beat Tripp Tatum in the second round, he will pass her for the No. 2 spot. Billy Torrence, who defeated Force, has the chance to pass Justin Ashley for fourth place after Ashley's loss to Antron Brown

Funny Car championship contenders Ron Capps, matt Hagan, and Cruz Pedregon shared their thought about the championship day ahead during the pre-race ceremony. 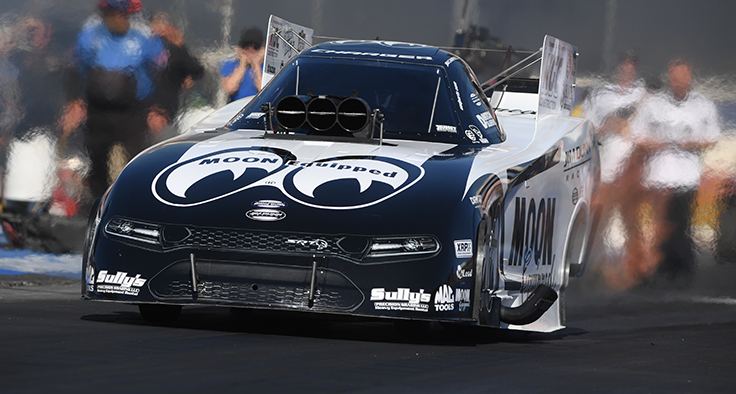 Jim Campbell, who stunned everyone with a semifinal finish in Jim Dunn’s Funny car at the summer/Winternationals here back in July, looks like he might be off to another career day after upsetting low qualifier Robert Hight, who smoked the tires. 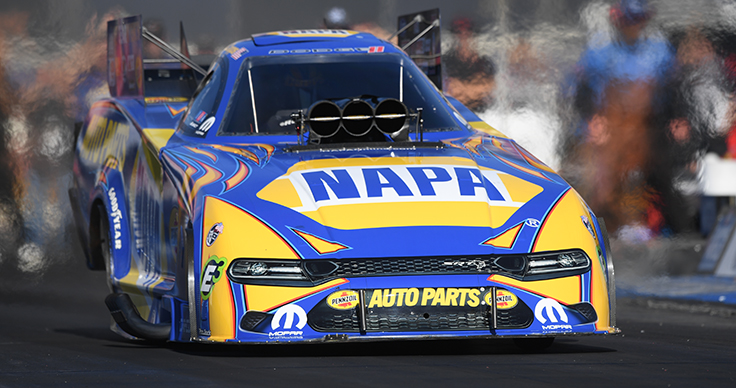 The Funny Car championship will extend at least one more round as Ron Capps and Matt Hagan won their first-round races to set up a titanic match between the pair in round two.

If Hagan can beat Capps, he can still win his fourth career Funny Car championship if he goes on to win the event,

Third-place Cruz Pedregon was already out of the hunt with Capps’ win, but Pedregon then rattled the tires and lost against Tim Wilkerson 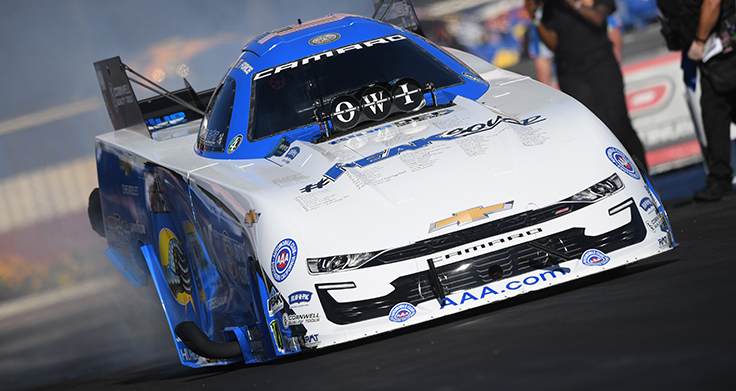 With third-place Pedregon and fourth-place J.R. Todd both losing in the opening stanza, 16-time world champ John Force could get as high as third place if he reaches the final round

Bob Tasca III and Alexis DeJoria also have the chance to get to third place with event wins.

Pro Stock championship contenders Greg Anderson and Erica Enders shared their race strategies prior to round one.

Few people expected to see the Pro Stock championship decided in round one, and it wasn’t. Championship contenders Erica Enders took care of business after opponent Steve Graham fouled by a thousandth of a second while leader Greg Anderson also benefited from a foul by No. 16 qualifier Mike Callahan. Anderson also lit up the score boards with a 6.549 in his HendrickCars.com Camaro that is currently holding as low E.T. of the meet.

Anderson will race Deric Kramer in round two while Enders is paired against Matt Hartford, who beat Enders twice this season, but has lost the last two times they’ve raced. Anderson has a 3-1 record against KB Racing teammate Kramer.

The father-son team of Chris and Mason McGaha has raced five times this season with 19 year old Mason winning the first two. Lately, Chris scored with a win in Dallas but Mason has now run the score to 4-1 with a victory in Pomona. The latest battle between the Harlow Sammons cars was decided early when Chris’ Camaro shook the tires and Mason rolled to a 6.586. Mason has also passed his father for seventh place in the Camping World Pro Stock standings. 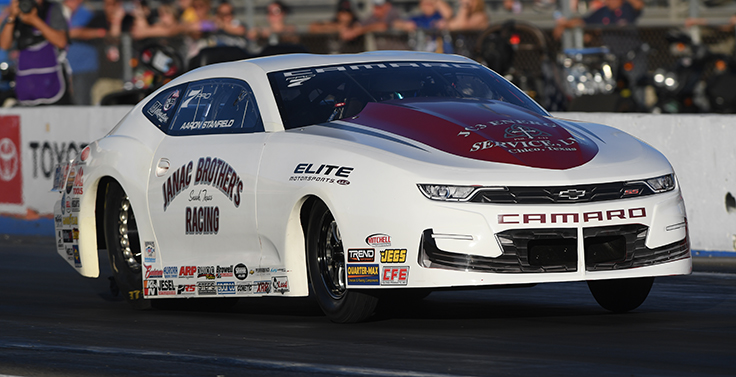 Two-time Factory Stock champ Aaron Stanfield moved to fifth place following his victory over Cristian Cuadra, who also shook the tires and shut off. Stanfield won with a 6.588 but will surrender lane choice to Kyle Koretsky, who was impressive with his Lucas Oil Camaro, running a 6.566 in his win against Troy Coughlin Jr. 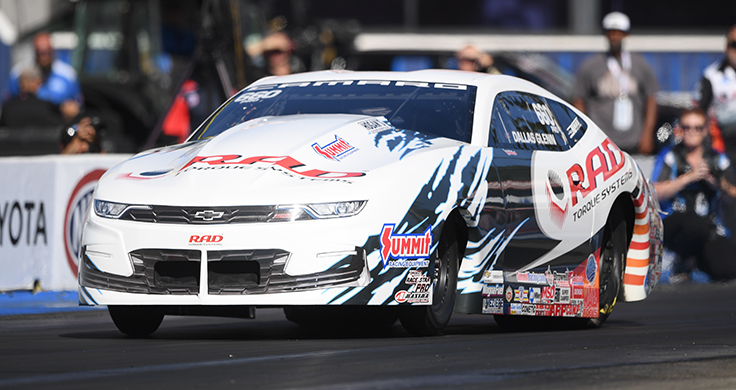 Las Vegas winner Dallas Glenn also ran his win streak to five rounds when he drove his RAD Torque Systems Camaro to a  6.572 to stop Alan Prusiensky’s Dodge. Glenn faces a tough battle in round two against Mason McGaha. 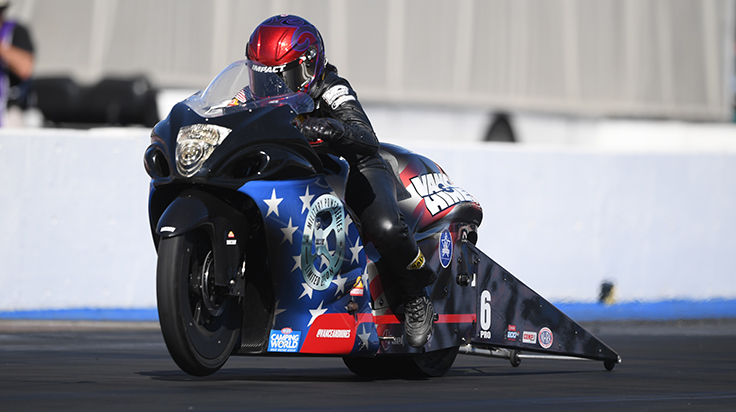 Angelle Sampey continued her quest for a fourth championship after winning her round one race against Angie Smith, who fouled. Sampey had to chop the throttle on her Mission Foods/Vance & Hines Suzuki when it drifted close to the wall. Sampey’s run might have been the most impressive of the round as she left with a stout 1.03-second sixty-foot time and she ran a 6.812. 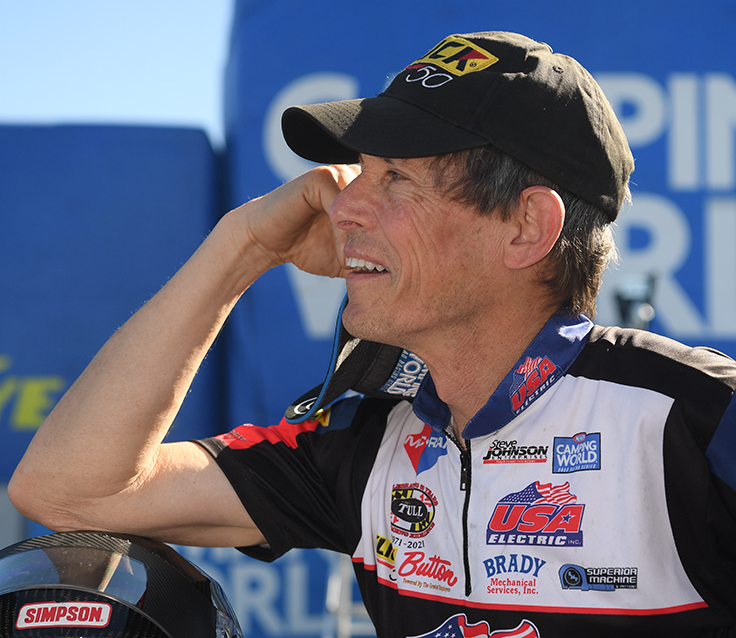 After suffering a 15 point deduction for crossing the centerline last night, Steve Johnson kept his title hopes alive with a win over Fred Camarena in round one. Johnson, the Las Vegas champ, made a clean 6.801-second run to advance to the quarterfinals where he’ll face off against Eddie Krawiec.

“I’m pretty nervous; I didn’t think my stomach would be this tensed up,” Johnson said. 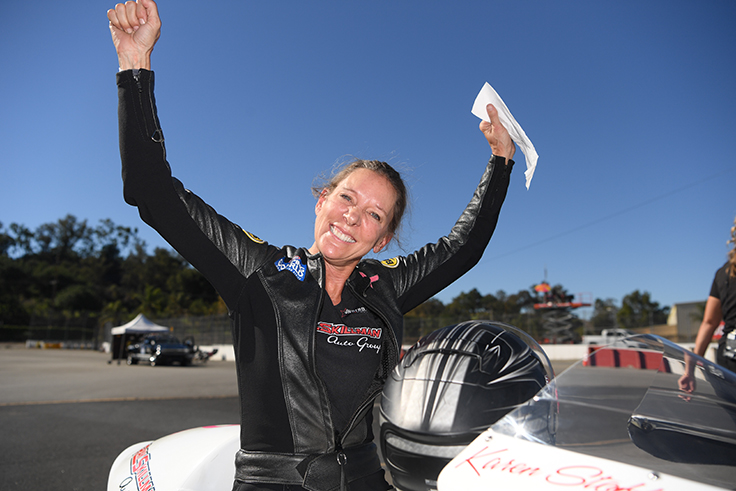 Low qualifier Karen Stoffer continued to light up the scoreboards with a 6.741 in her win over Kelly Clontz but the real news was the bottom number as Stoffer joined the 200-mph club with a 200.26 mph run on her Big St. Charles/Skillman Auto Group Suzuki.

“That 200 is a big deal,” said crew chief Tim Kulungian. “Thanks to team owner Jerry [Savoie] for letting us come out here and race and that was a good job by Karen. That’s been a long time coming.” 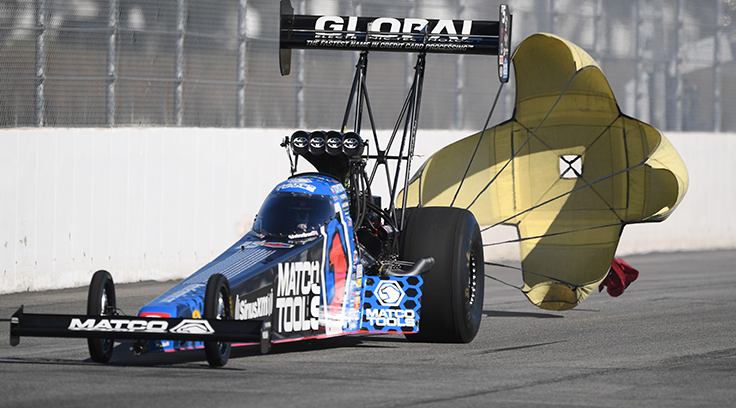 Antron Brown is trying to make his last race with Don Schumacher racing a memorable one as he has now reached the semifinals after defeating Billy Torrence on a 3.74 to 3.73 holeshot. The victory moved brown from eighth to seventh in points and could get as high as sixth if he reaches the final round.

Newly recrowned world champ Steve Torrence escaped to the semifinals in a pedaling battle with Doug Kalitta. Moving on to the final four with a 4.25. It’s a disappointing end to a disappointing season for Kalitta, who was hoping to end the year with his milestone 50th career win.

Cameron Ferre, whose only national event win came in Super Comp at the 1992 Finals, is another round closer to adding a Top Fuel win after driving the EMPI/Paton racing past Clay Millican. Ferre will take on Torrence in the semi’s.

Low qualifier Mike Salinas lost the chance to pass Brittany Force for second place when he lost a wild, tire-smoking battle with Tripp Tatum. Salinas nearly tipped over his Scrappers racing entry trying to get to the finish line first. Wild! 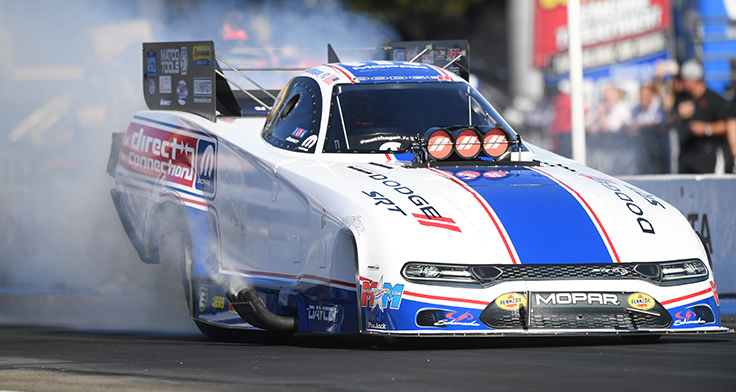 Matt Hagan and crew chief Dickie Venables rose to the occasion in round two, defeating points leader Ron Capps to keep their championship dreams alive. Hagan now needs to win the event to steal the championship. Capps left first but drifted to the wall and lost a tight 3.94 to 3.98 race.

Hagan’s next hurdle will be Alexis DeJoria, who defeated Tim Wilkerson with a 3.98, which gives Hagan lane choice.

The other side of the ladder will put Bob Tasca III, who beat Jim Campbell, against John Force, who bested Paul Lee. Tasca has lane choice. 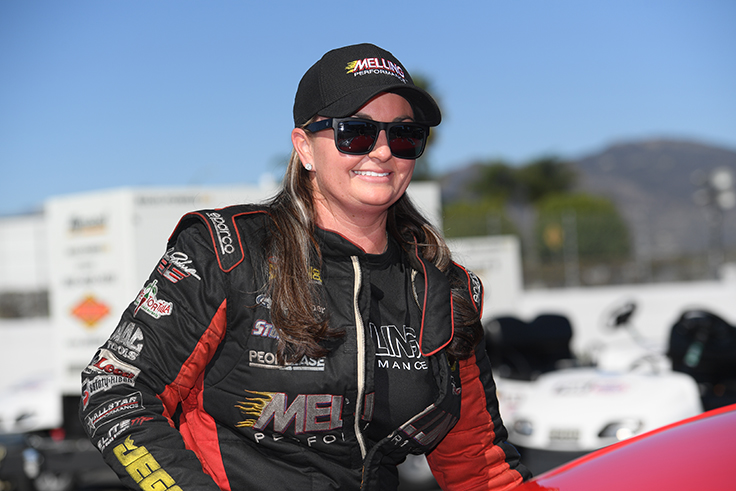 The race for the Pro Stock championship will go down to the wire after Erica Enders won her quarterfinal race against Matt Hartford and Greg Anderson defeated Deric Kramer.

The two championship challengers will race in the semifinals. If Anderson wins, he will clinch the championship. If Enders wins, she’ll also need to win the final round in order to defend her title.

Harford took his time staging in his Total Seal Camaro and then tagged the Tree with a nearly perfect .001 reaction time but his chances for an upset ended when he shook the tires. Enders kept her title hopes alive with a 6.638.

Anderson again had low elapsed time with a 6.569 that was more than enough to stop Kramer. 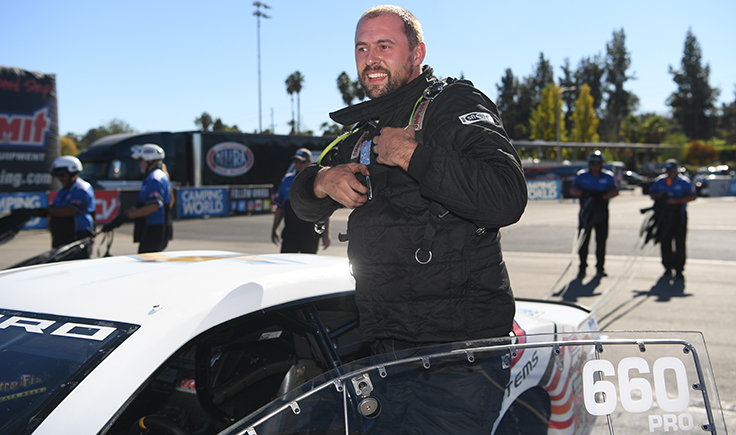 Mason McGaha became the latest victim of “Double-O” Dallas Glenn in the quarterfinals. McGaha was very competitive with a .013 light and a 6.610 but that wasn’t enough to hold off Las Vegas champ Glenn, who once again was nearly perfect with a .001 light and a 6.615 for the holeshot victory. 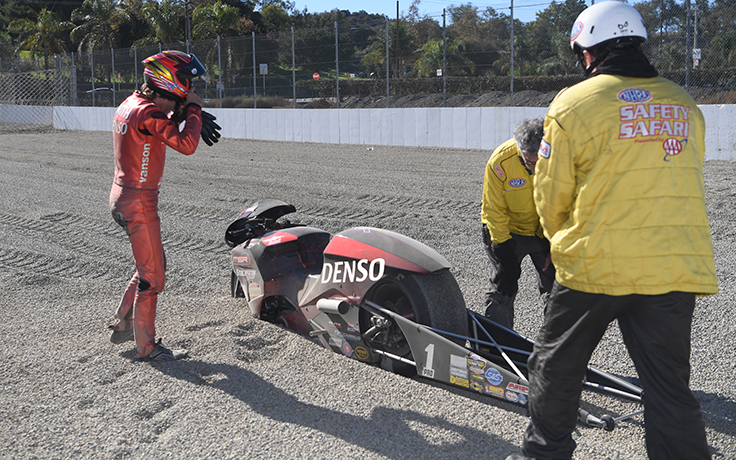 Matt Smith clinched his fifth world championship when he beat Angelle Sampey on a holeshot in round two and then put his Denso Buell into the Pomona sand trap.

Smith rode to a 6.808 to hold off Sampey’s 6.777, officially clinching the title. Smith later acknowledged that he had no brakes. He managed to get the bike slowed by dragging his feet through the shut down area. He accepted his championship trophy barefoot on the top end stage. 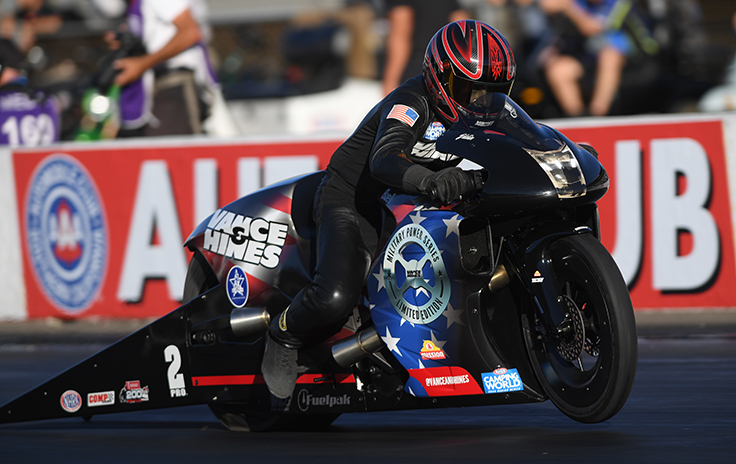 Steve Johnson’s gritty drive to a championship ended in the quarterfinals when he lost on a holeshot against Eddie Krawiec. Johnson ran a 6.859 but came up six thousandths of a second short against Krawiec’s 6.876.

Krawiec will race Matt Smith in the semifinals with the winner to face Karen Stoffer in the final round since Stoffer has a bye run. 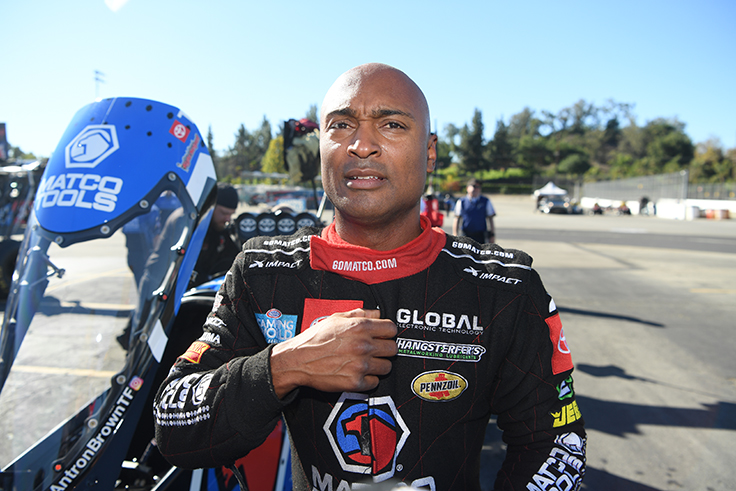 Steve Torrence’s bid to add a season-ending victory at the Auto Club NHRA Finals almost ended when his Capco dragster quit with a big lead on Cameron Ferre. Torrence took the win light by just .006-second with a 3.81 at just 283 mph while Ferre was second through with a 3.83 and 30 mph faster at 313 mph.

Torrence will face his good friend, Antron Brown, in the final. Brown beat Tripp Tatum with a 3.79 and will have final-round lane choice. 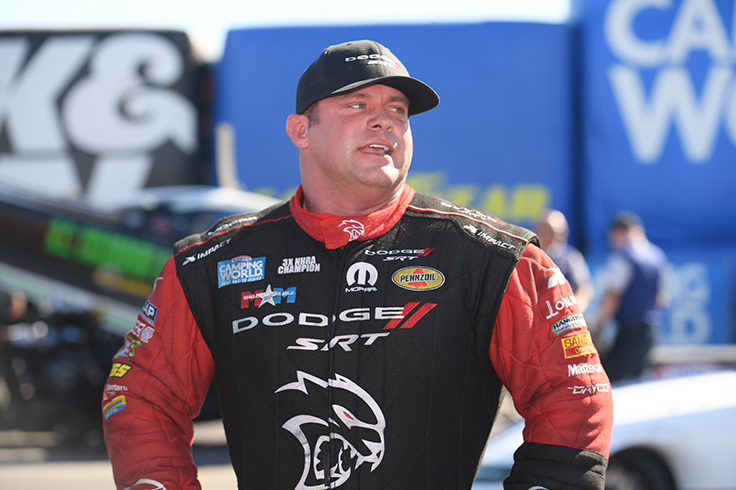 Ron Capps was crowned the 2021 Funny Car champion, his second season title, when Alexis DeJoria defeated his long rival, Matt Hagan, 3.94 to 3.97. After beating Capps in round two, Hagan needed to win the event to pass Capps, but fell two rounds short.

"I love that guy, man; congratulations to Ron Capps," said a magnanimous Hagan. "He's a true veteran out here., probably twice as long as I've been out here. So, congratulations to him that team. They outworked us this year and at the end of the day, we get to come back in and try to fight him again next year. I just want to say I'm proud of Dickie Venables and my entire crew. We battled back after having a couple bad races. I'm happy for Ron, sad for us. But at the end of the day, the sun comes up and goes back down. Tomorrow we get to work and over the offseason, come back out here and kick everybody's butt."

DeJoria will face Bob Tasca III in the final round and will have lane choice over Tasca, who ran 3.95 to beat John Force.

A round after clinching the Pro Stock championship with his semifinal win over Erica Enders, Greg Anderson will attempt to win his 99th national event when he takes on KB Racing teammate Kyle Koretsky in the final round. Anderson will have lane choice after a 6.578 although Koretsky, appearing in his fifth career final, it more than competitive with a 6.601 in his win over rookie of the year contender Dallas Glenn.

Karen Stoffer will take on Matt Smith in the Pro Stock Motorcycle final in a race that will feature the two quickest bikes in the field. Smith, who was able to return following his trip to the sand trap during his championship clinching win over Angelle Sampey in the quarterfinals.

Stoffer has lane choice thanks to a 6.785 on her semifnal bye run while Smith posted a 6.813 when he stopped Eddie Krawiec in the semifinals. 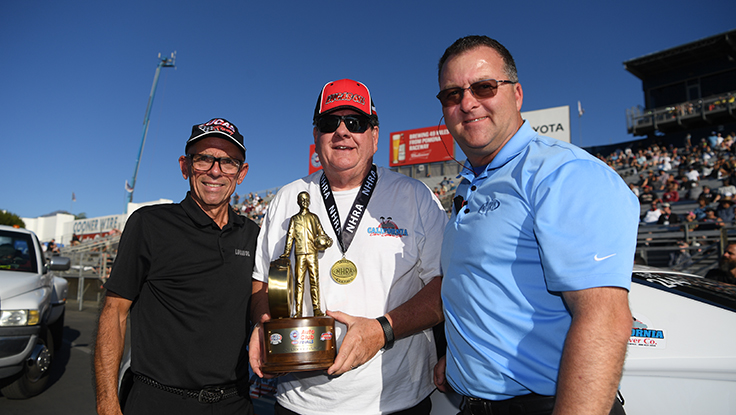