You'll never find Antron Brown lacking for energy, but it hasn't been surprising seeing the three-time Top Fuel world champ and his team with a little more pep in their step this offseason.

After arguably the most challenging stretch in his illustrious Top Fuel career, Brown ended his 2020 NHRA Camping World Drag Racing Series on the high note he had been seeking, winning his first race in more than two years with a victory at the finale in Las Vegas.

It's energized the team throughout the offseason, leaving Brown feeling rejuvenated and anxious to open the 2021 season in his Matco Tools/Global Electronic Technology/Toyota dragster at the Amalie Motor Oil NHRA Gatornationals, March 11-14 at Gainesville Raceway. 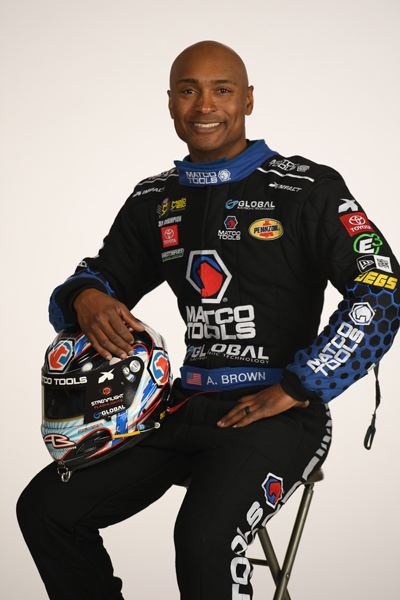 "When you end on a note like that, it helps you in the offseason. We accomplished what we wanted, and knowing we can get back there again, it gives us something to shoot for in 2021," Brown said. "We don't want to do that just once. It gets that mood in your mind that you ended the year like that, let's try to start the year in the same way. It gives all of us that motivation and drive to try and do that."

After several changes, Brown and his team, led by crew chief Brian Corradi, finally found their footing late in 2020. But the team certainly had to overcome plenty of bumps to get back to that elite status.

Brown won three straight world titles from 2014-2016 and picked up four victories in 2017 before slumping to just a single victory in Seattle the following year.

He went winless in 2019, barely finishing in the Top 10 as the team struggled to return to its dominant ways. Big runs weren't the problem, but piecing it all together had eluded the team before it finished strong in 2020. Brown advanced to the semifinals in Houston before turning in an outstanding weekend in Vegas, beating the likes of Tony Schumacher, Billy Torrence, and Clay Millican to face off with close friend Steve Torrence in the final round.

Torrence had already clinched his third straight world title, but Brown picked up the holeshot victory, ending a 42-race victory drought and giving the fan-favorite driver his 67th career victory.

"What a win like that does is tell you that you're moving in the right direction," Brown said. "We're back on track when it comes to consistency. The way you win rounds is by being consistent. That's where we worked hard last year, and when the car responds, there's a whole different atmosphere. That's where we used to be, and that's where the Capco boys are. We're getting back there, and that's what you have to do."

A consistent car means a much more confident team, and Brown started to see that creep back into his team to end last season. It's forever a fine line, but with an all-star cast around him, expectations are again high for Brown and his team heading into Gainesville.

"I've been in it where you had a bad season and had to recoup, and it shows you what you're made of," Brown said. "It's a matter of keeping it positive. We put high expectations on ourselves, and then when it all came together, it was a great feeling. We're going to keep that same mindset and hopefully pick right back up where we left off. There's no doubt we're ready to go and get after it."