Racing at Maple Grove Raceway has always been special for Angelle Sampey, but winning has taken on an even bigger meaning right now for the three-time world champion following the aftermath of Hurricane Ida in her home state of Louisiana.
11 Sep 2021
Josh Hachat
Feature

Racing at Maple Grove Raceway has always been special for Angelle Sampey, but winning has taken on an even bigger meaning right now for the three-time world champion.

Her first victory in Pro Stock Motorcycle came 25 years ago at the track and Sampey made a great impression on Friday to open qualifying at the Mopar Express Lane NHRA Nationals presented by Pennzoil, jumping to the No. 1 spot.

After a final round appearance at Indy last weekend, Sampey hopes to finish the job this weekend to start the Countdown to the Championship, in part to raise awareness for those suffering in the Louisiana area following Hurricane Ida.

Sampey has witnessed those in trouble and without power and a victory this weekend on her Mission Foods/Vance & Hines Suzuki could help in a number of ways.

“It’s all about winning to help out because what's going on with home right now is bad. I want people to know that we need all the help we can get, whether it's donations or manpower,” Sampey said. “But I still have that momentum going (after Indy) and I’m still trying to put my hometown on the map. The situation is very bad. Everything’s destroyed, people are displaced and there’s so many people that don’t have a home anymore where I live. So I don’t know what’s going to happen with that and that’s my main concern.”

It’s been a whirlwind of emotions in recent weeks for Sampey, who expects her area will be without power until the end of September, while other ravaged areas could be even a month or so later.

Oddly enough, though, Sampey has found when things are hectic outside of racing, it helps her get locked in on the bike. That was true in Indy and Sampey appears on point at Maple Grove Raceway after her run of 6.761 at 198.85.

“I’ve found in my experience of my 27 years of racing, the more has gone on in my personal life, the better I do on the racetrack because it's something about putting the helmet on and having the opportunity to get away,” Sampey said. “There’s nothing I can do about anything in the world right now when my helmet's on and I feel like it streamlines me into this super focus. When I got all this noise in my world and I put my helmet on, it actually helps.” 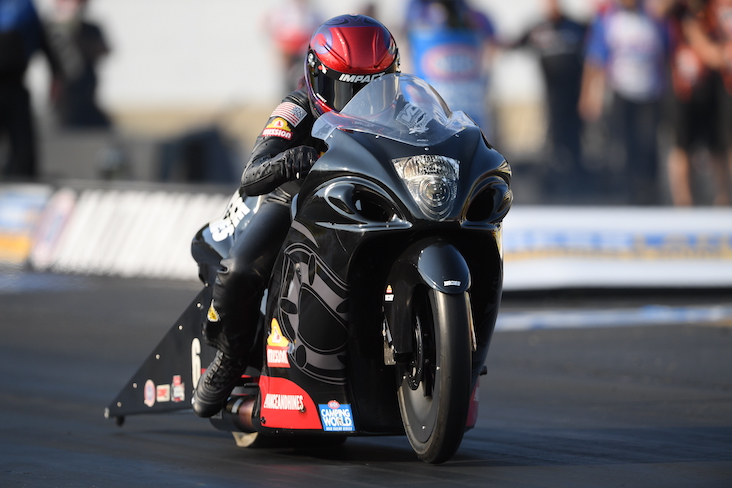 The drive for the next victory is what’s currently pushing Sampey. She picked up one a year ago at the third race at Lucas Oil Raceway at Indianapolis, but she’s still searching for her first on the new Suzuki she debuted this year.

Sampey entered the Countdown to the Championship fifth in points and has advanced to back-to-back final rounds entering the playoffs, so the longtime standout knows she’s close.

“I'm greedy and 43 wins is not enough. You could take them all away from me because the only one I care about is the next one,” Sampey said.

She also has nothing but praise for the bike that continues to show impressive performances. Sampey has had to adjust her style and make a number of changes, but what was previously a work in progress has become much more refined over the past few weeks.

There’s still work to be done, but 25 years after her first victory, Sampey, who has more round wins at Maple Grove Raceway than any rider in the class, is eager to cash in again.

“The bike is has been amazing from the day they put me on it, it's been me trying to get it down the racetrack,” Sampey said. “I feel comfortable on it now and my main goal is to get the bike perfectly straight down the racetrack. When I can really accomplish that and get this bike perfectly straight down the track, it’s gonna be hard to beat. I mean, it'll be up to me to race well, but the bike itself is going to be hard to beat.

“Everything about this motorcycle is amazing, it’s just a matter of me getting it down the racetrack. I just need to stay ahead of the motorcycle. That's my goal every round now.”