At the 1996 Mile-High Nationals, Angelle Sampey and Karen Stoffer helped make history in the Pro Stock Motorcycle class. A quarter-century later they are still going strong and the class has become a home for some of NHRA’s most competitive female racers.
17 Jul 2021
Kevin McKenna, NHRA National Dragster Senior Editor
Race coverage

At the 1996 Mile-High Nationals, Angelle Sampey and Karen Stoffer made history in the Pro Stock Motorcycle class. A quarter-century later they are still going strong and the class has become a home for some of NHRA’s most competitive female racers.

“If you’d have told me I’d still be at this 25 years later, I’d have thought you were nuts.”

That is a sentiment shared by both Angelle Sampey and Karen Stoffer, who are celebrating their Silver Anniversary in the Pro Stock Motorcycle class at this weekend’s Dodge//SRT NHRA Mile-High Nationals in Denver. It isn’t an exaggeration to suggest that Sampey and Stoffer, (along with Stephanie Reaves who also made her debut at that event) changed the course of NHRA racing when they arrived in Denver in the summer of 1996. 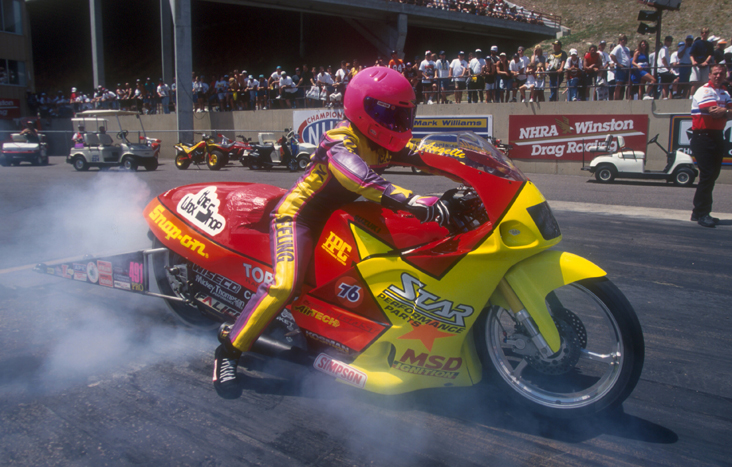 “I was so young and so naïve,” Sampey recalled. “I didn’t think at all about the risks involved. I didn’t understand anything about sponsorships or how to interact with the fans. There was so much I didn’t understand. Today, I’m so much more aware of those things.”

Midway through the 1996 season, Sampey was added to George Bryce’s Star Racing team as a teammate to world champion John Myers. Despite her relative inexperience, Sampey qualified No. 4 in the field in her debut and rode to the semifinals, earning wins against Joe DeSantis and Joey Bartone. Sampey ultimately lost to Dave Schultz, but not before throwing a scare into the multi-time world champ with a six-hundredths holeshot.

“I’d been training for almost a year and I remember we were supposed to go to a ProStar race in North Carolina but it got postponed by a storm, so we decided to come to Denver,” Sampey said. “The thinking was that it was slower up here so it would be a good place to learn.”

Sampey may have been young and inexperienced, but one thing she was not was nervous.

“Oh, hell no, I wasn’t afraid of anything back then,” she says. “I came here thinking that I was going to win the race. I was raised with the mentality that if you wanted to get me to do something, just tell me I couldn’t and there were a lot of people who didn’t think that I belonged on a Pro Stock Motorcycle. I wanted to prove them wrong.”

Sampey long ago silenced her doubters by winning three world championships and 43 national event wins, even after taking several years off to start a family. In her heyday, she engaged in an epic rivalry with Matt Hines, another three-time world championship. Ironically, Sampey now rides for the Vance & Hines team, something that most thought would never happen.

“If I had it to do all over again, I’d do a lot of things differently,” said Sampey. “I’ve grown a lot as a person, and I see things so much more clearly now. A lot of it is becoming a mother and a lot is just learning from my mistakes.  One thing I wish I’d have done was to join this team sooner. I feel so much at home here. Years ago, I never knew this environment existed and I wish I had.”

Stoffer, along with her husband and crew chief Gary, arrived in Denver in 1996 with what was essentially a modified bracket bike but as a rider, she had already established solid credentials including a Division 7 Sportsman Motorcycle championship. She didn’t qualify in her debut and didn’t run another race until 2002 but has become one of the class’ most respected riders over the last two decades. Stoffer’s career includes nine national event wins in 23 career finals and she has a dozen Top 10 finishes including a best of fifth in 2012. 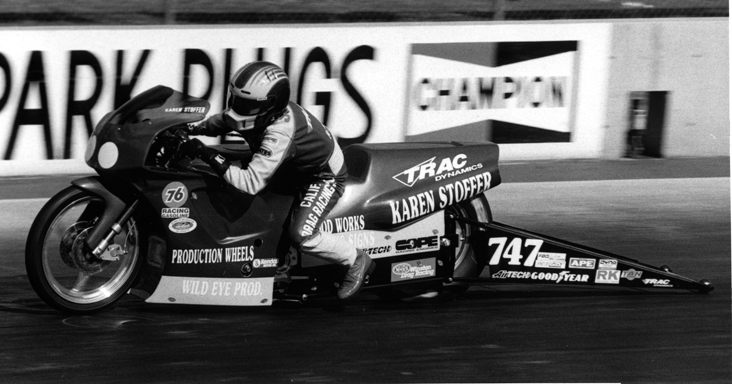 “We leased an engine from Dave Schultz to come here in 1996 but we didn’t even have a computer on our bike. I was just a no-name and we were pretty green,” Stoffer recalled. “I’d been to George Bryce’s school and I had a license, but I remember that we needed approval before we got added to the entry list. I’m not sure how the three of us all ended up here at the same time, but I know that Gary and I had a sponsor commitment, and this was a race close to the West Coast that worked for us. I hated being the only woman who didn’t qualify but we just didn’t know enough.”

Much like Sampey, Stoffer admits that she didn’t fully understand what the NHRA “Big Show” was all about until she got a chance to take part in it.

“I remember that after the first day, we took a photo and went and had some hero cards made at a Kinkos,” Stoffer said. “I didn’t know much about the whole media side of things, but I recall that Steve Johnson came over and helped us out and we met a lot of good people.”

Stoffer also never expected to be racing a quarter-century after her debut but she takes good care of herself physically and mentally, and her solid credentials led to her current ride as a teammate to world champion Jerry Savoie.

“I never thought I’d be here now, it just sort of happened,” said Stoffer. “We were fortunate to have GEICO as a sponsor for a number of years and that was really a big part of the success I’ve had in my career. Of course, I would like to win a championship, but honestly, I just wanted to be known as a skilled rider that could be trusted. I’ve worked hard at that during my whole career and I’d like to think it helped lead to where I am now, racing with Jerry.”

On the surface, it’s hard to decide what’s more impressive, the fact that Sampey and Stoffer are still racing and still very competitive, or that there have now been 22 women who have raced in the class, including Peggy Llewellyn, Angie Smith, and Jianna Salinas, who have each won national event titles.

“That’s the beauty of NHRA; it is so diverse,” said Stoffer. “Women [Pro Stock Motorcycle] racers have become so common I don’t really think about it, but I Angelle or I helped inspire someone, male or female, to pursue their dreams that’s a great thing.”