Thanks to a recent resurgence, Clay Millican isn’t sweating the rigors of the Countdown to the Championship or the increased intensity that usually comes along when the Dodge//SRT NHRA U.S. Nationals arrive over Labor Day weekend.
26 Aug 2021
Josh Hachat
Feature

Clay Millican isn’t sweating the rigors of the Countdown to the Championship or the increased intensity that usually comes along when the Dodge//SRT NHRA U.S. Nationals arrive over Labor Day weekend.

That’s because the last couple months have already felt like a de-facto playoff hunt for the Top Fuel veteran. The popular Millican was put in a precarious position when he had to step out of his dragster in Norwalk due to an inner ear infection. He dropped to 11th in points after that race in late June — one spot out of the final playoff position — but Millican and his team have been on an impressive spurt since then.

Millican returned to the car in Denver, advancing to the semifinals, and has posted back-to-back final rounds the last two weekends in Topeka and Brainerd, bumping him all the way to seventh in points heading to Indy next week.

His berth in the Countdown to the Championship is now assured, but Millican is thinking bigger. Another tremendous weekend at the points-and-a-half U.S. Nationals could move him all the way to fourth entering the playoffs, where his mindset won’t change simply because Millican has been in playoff mode since June.

“We’ve been in the Countdown chase for a little while now because we had to keep ourselves in the Top 10,” Millican said. “The whole inner ear thing put it in jeopardy, but it’s been awesome. We’re really not doing anything different, but hopefully, we can continue this the rest of the season. It’s one of those things where take runner-ups all the way through the playoffs. If we can continue this streak all the way through, we’re going to be right there.”

Millican certainly wants victories, but he’s not about to complain with deep runs at each race this time of year. The car has always had potential, advancing to the final round in Las Vegas early in the season, but there were plenty of bumps in the road, too.

Millican suffered through a handful oildown penalties, costing the team 75 points, and it’s something the three-time event winner simply chalked up to bad luck. 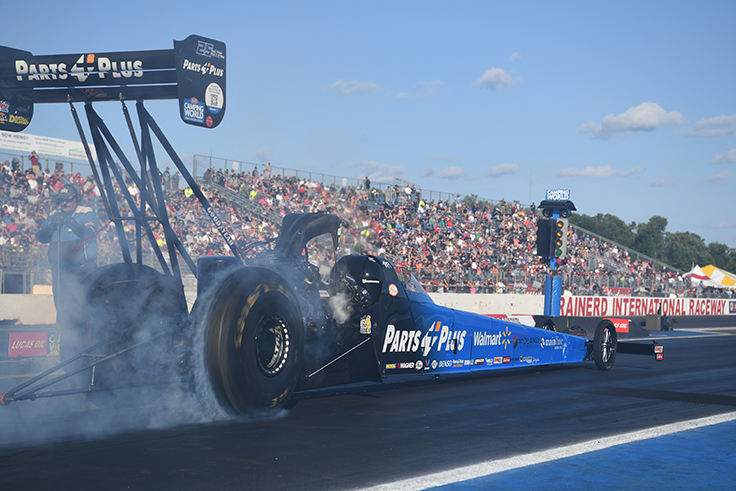 “It was just a lot of weird parts breakage,” Millican said. “Knock on wood, that’s seemingly gone at the moment. [Crew chief] Mike Kloeber has had a good handle on going down the racetrack all year. The car has been really good, and I’m just so proud of everybody. We’ve been on a good run, and we just want to keep it up.”

A third straight strong performance would have Millican in line to win for the first time at the sport’s biggest race, the Dodge//SRT NHRA U.S. Nationals.

He’s picked up two No. 1 qualifiers at the Big Go, but Millican’s never enjoyed a great deal of success on race day, something he’s confident can change with his 11,000-hp Parts Plus dragster running as consistent as it has been lately.

Kloeber jokingly called it a bracket car in Brainerd, and knowing Millican’s bracket racing affinity, that brought a smile to his face.

But it was amazingly consistent in Brainerd, running a series of 3.72s, including in the finals against Steve Torrence. No matter the weather, the car has performed as of late, and it has Millican excited for how the final eight events could play out.

“Hot tracks haven’t seemed to bother Mike’s tune-ups at all, and it’s so fun as a bracket racer to see how consistent the car was in Brainerd,” Millican said. “I wouldn’t change a single thing with how this car is running right now.

“There’s so much more attention paid to the U.S. Nationals and all of us race car drivers are showoffs, so you want to do something big when people are watching. We’ve never turned on a ton of win lights there, but with the streak we’re on right now, I feel like we can change that.”