On a terrific weekend for DeJoria, she finished the job against J.R. Todd on Sunday, going 3.921-seconds at 327.66 mph to win the NHRA Thunder Valley Nationals and get her first victory since 2017.
17 Oct 2021
Josh Hachat
Race coverage

Bristol Dragway was already one of Alexis DeJoria’s favorite places to race.

After a thrilling weekend in Thunder Valley, capped off by her first win since 2017 on Sunday, her love for the facility certainly grew even more.

On a truly magical weekend for DeJoria that included her first No. 1 qualifier since 2016, she finished the job in an all-Toyota matchup against J.R. Todd, going 3.921-seconds at 327.66 mph to knock off the former world champ and his run of 3.939 to win the NHRA Thunder Valley Nationals. It was DeJoria’s first victory in four years and a much-needed win for the standout. She had come close on a number of occasions since returning to the sport last year but wasn’t able to take that final step this year.

On Sunday, that all changed as DeJoria ensured she was able close out her season with plenty of momentum.

“I was hungry and I know that feeling,” DeJoria said. “I was just happy to be there and I believed I was going to win. It’s one of the biggest wins of my career. Coming back after two years off, getting to work with my mentor and friend (Del Worsham), being able to do this, it’s huge. It’s just been a roller-coaster and it takes a toll on you.

"It’s very humbling, but I was just ready to win. I was calm and just excited, and when I’m in that headspace I do my best. This is definitely one of my favorite tracks and it’s just beautiful here. I just love it.” 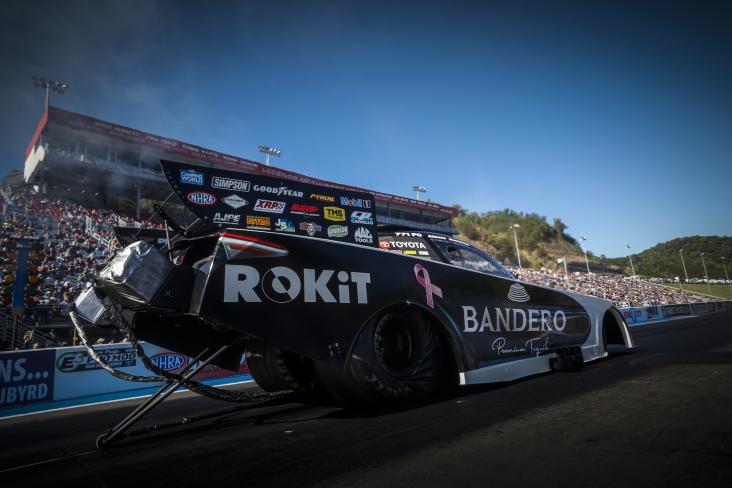 DeJoria advanced to the final round for the second time this year by making better runs each round. She knocked off Paul Lee, went 3.931 on a bye run and then laid down something serious against Robert Hight, going 3.904 at 327.74.

It gave the No. 1 qualifier the quickest run of the event in the class and another stellar run during her big weekend. She then stepped with an unbelievable .002 reaction time in the final round against Todd, never trailing for the victory.

“We have a great car and we just haven’t had those luck rounds,” DeJoria said. “We were slamming after that first round. Just to make it to the semifinals and finals was a huge deal and it was a big deal to have an all-Toyota final round. This is a huge weight lifted off our shoulders. Getting that No. 1 qualifier was a huge first step and to get the Wally at the same race is just insane. It’s a huge confidence-builder for our team. We knew we could do this, it was just a matter of getting it done.”

Todd, meanwhile, traversed through an impressive group of contenders to reach the championship round, which played perfectly into the former world champ getting back into championship contention.

In the semifinals, Todd went 3.921 to beat Ron Capps, grabbing wins against the top two drivers in the standings.

Capps crossed the center line on that run, costing him five points, but he still leaves with the points lead over Hagan, as he takes a whopping one-point advantage into Las Vegas. Todd is now 83 points out of first as well. With several drivers still in championship contention, it simply means plenty of chaos is in store over the final two events in Funny Car.