Fan-favorite Scott Palmer sat out most of the 2020 season, but he's eager to return this season with new partners, a new car, and a renewed attitude focused on becoming NHRA's next first-time Pro winner. One thing that won't change is his popular pit area throttle whacks.
17 Feb 2021
Kevin McKenna, NHRA National Dragster Senior Editor
News

Compared to many other sports, NHRA fans got to see a lot of action during the COVID-19 pandemic-interrupted 2020 season, but there were also some obvious and glaring omissions, not the least of which was the absence of popular Top Fuel Pro Scott Palmer. Thanks to his gregarious personality and throttle-thumping pit area warm-ups, Palmer enjoys a vast and loyal fan base, and fortunately, they’ll get to see more of him this year as he plots his return to the NHRA Camping World Drag Racing Series. 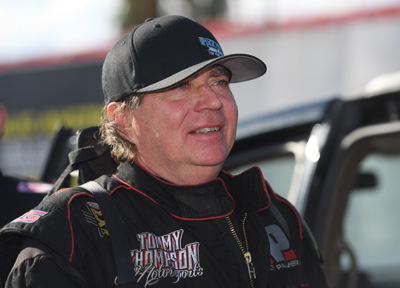 “Right now, we are in full Top Fuel mode around here,” said Palmer. “We’re working on all our stuff, getting ready for Gainesville. We’ve taken everything apart and measured and had some new stuff come in. We had engines that were ready to go, and we took them apart and put them back together just to check and make sure they were right. Our whole goal is to try and win races. I’ve been so close a few times; I know that we have what it takes.”

Last year, Palmer started his season in February in Phoenix but didn’t race again until the two Texas events in Dallas and Houston more than seven months later. Obviously, the pandemic threw a wrench into his plans, especially after the remaining 2020 events featured a limited spectator capacity. For someone who feeds off the energy of his fans, that was a deal-breaker.

“I could have raced more last year, but I just chose not to, at least when it comes to the Top Fuel car,” Palmer said. “The limits on fans just make it less fun, and that’s why I race. I race because I am a fan, and I know how important they are to our team. It’s not just the throttle whacks and the crowd in our pit area. It’s the whole atmosphere when you have full grandstands and a big crowd walking the pits. If we don’t have that, I’d just as soon stay home and wait until we can.

“I did stay busy last year. I run a Pro Mod team for John Stoffer in the Midwest series, and that takes a lot of effort, and I also have an Outlaw Pro Mod and my nitro Studebaker. We actually made good progress with that car. It’s an animal, but we’re moving in the right direction with some 500-600-foot runs. I’ll still do all of those things, but this year I really want to focus on Top Fuel as much as possible.”

Palmer doesn’t use the word sponsor to describe his supporters. To him, they are friends, and they include longtime backer Tommy Thompson, RJS Safety, Trask Performance, RacerDirect.com, Kent Longley of Marck, Ind., and new partner Chaise Myers of Interpack. He’ll also continue to have the support of the Capco team, in particular brothers Bobby and Dom Lagana. Palmer’s current schedule includes 10-12 NHRA events beginning with the season-opening Amalie Motor Oil NHRA Gatornationals in Gainesville.

“Dom’s accident was another reason why I didn’t race as much last year,” Palmer said. “I don’t think people realize how much Dom did for our team. I can’t remember too many runs I’ve made where Dom didn’t walk up to the car in the water box and make a change or just look something over. It was almost like we could read each other’s minds. He’s also a huge part of Billy Torrence’s team, and I don’t know anyone who is as driven to learn as he and Bobby are. I really couldn’t come back out until I knew Dom was going to be okay. He is the glue that holds our program together, and I’m thrilled that he’s going to be in Gainesville.”

Palmer went to a pair of final rounds during the 2018 and 2019 seasons, and it wasn’t hard to imagine that he was in line to become NHRA’s next first-time Professional winner. Palmer still believes that’s in the cards. In fact, when he assesses the current landscape of the Top Fuel class, he becomes even more optimistic. Looking for inspiration, Palmer needs to look no further than T.J. Zizzo, who rarely fails to turn in a competitive performance in spite of a limited schedule. 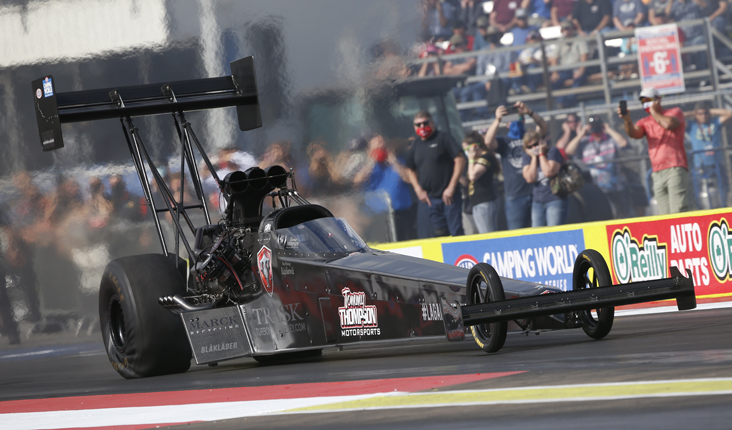 “I have a new car and new parts and all the support I need from the Capco team, so I’m running out of excuses,” said Palmer, who also benefits from longtime crewmembers Rick Ducusin and Bobby Cardoza. “The Capco crew shares so much with me. They literally have no boundaries. They just execute their game plan better than I do. Honestly, I think I have more of a chance now than ever. Money is tight for a lot of teams, and that helps level the playing field. We’ve always been able to work on a tight budget. I’ve been a survivor my whole life.

“We used to spend a lot of time trying to survive just to get to the next race, and that’s not the best way to do this,” Palmer said. “We’re going to scale back and go to 10-12 races. I definitely won’t do 20. I want to keep the competitive team we have now and be more like Zizzo and be a real threat when we show up. I also need to do better. Last year in Dallas, I lost to Leah [Pruett] on a holeshot. It wasn’t a big one, 3.78 to 3.77, but you can’t give those up. I lost because I was there in survival mode. I should have been there to win the race.”

On the weeks when he’s not racing NHRA events, Palmer will continue to wheel a variety of Pro Mod-type cars, including his Studezulla, his nitro-burning Studebaker Lark that also has a huge fan following. He admits the seat time is valuable, but only to a point.

“Watch me drive my dragster after I’ve been in the Pro Mod car and you’ll laugh,” Palmer said. “I’ll back up from the burnout and put the car to the left of the groove every time because I’m used to sitting left of the driveshaft. I have to break those habits when I get in the Top Fuel car. I can see my crew shaking their heads, and I just smile under my helmet. Once I hit the gas, it’s all good. I am so fired up about this season. I can’t wait to be back out there with the fans.”