Erica Enders put so much effort, energy, and focus into winning a fourth world championship in Pro Stock, she didn't have time to consider what would happen next. What comes next is as natural to her as breathing: Try to win another.
01 Feb 2021
Josh Hachat
Feature

Erica Enders put so much effort, energy, and focus into winning a fourth world championship in Pro Stock, she didn't have time to consider what would happen next.

Well, now Enders is there, and the way she sees it, if she's still racing she might as well keep trying to win championships.

"On one hand, I feel like I've accomplished way more than I ever set out to do," Enders said. "On the other hand, we might as well keep giving it our all, whether it's 'Strive for Five' or 'Drive for Five' or however you want to put it.

"I feel like after we won the fourth and I was able to become the winningest female, being able to make that history meant a lot. But as long as we're racing, there's not any reason we can't keep winning and hopefully contend for our fifth championship." 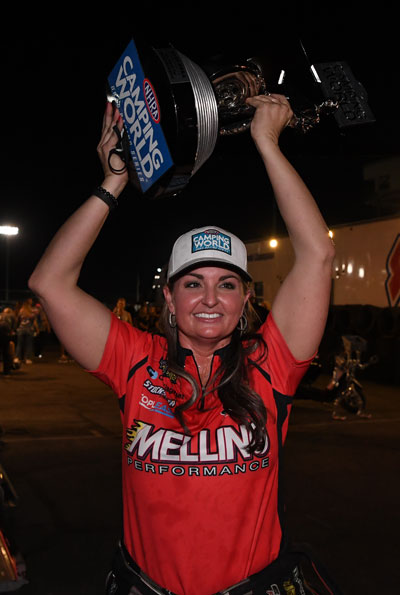 The fourth championship meant a great deal for Enders and her Melling Performance/Elite Motorsports team. That place in history as the winningest female when it comes to world titles was a massive driving force for Enders in 2020, and she came through when it counted by winning four of the 10 Pro Stock races last year, including a triumphant victory at the NHRA U.S. Nationals.

Chasing those dreams and becoming a trendsetter in the sport has always pushed Enders and, more often than not, those big goals have become reality. Enders also put together a complete season to win her second straight title, winning early in Phoenix, staying busy through the downtime during the COVID-19 pandemic, and not missing a beat when racing resumed in July.

As for what's next, she mentioned the names she would join with a fifth world championship, noting legends like Jeg Coughlin Jr., Lee Shepherd, Warren Johnson, and Bob Glidden, who each have four or more championships.

"Seeing the company you're with now and could join, I'm a fan of all of them. Guys like Jeg, Warren, Lee, Bob, they're all legends, and to be in that company, it's pretty surreal," Enders said.

To get another world title, Enders will have to contend with a class that's suddenly full of several hungry young talents.

It's made Enders somewhat of a seasoned veteran in the sport, but it certainly hasn't changed her hunger to keep on winning. After back-to-back world titles, a third consecutive championship would be a first for her, which may be all the motivation she needs in 2021.

"Being in these high-pressure situations, you learn a lot about yourself, and this team knows how to do well when your back is against the wall," Enders said. "We take a lot of pride in how we perform when the pressure is on. We've done a great job of performing well when it matters, so hopefully, we can keep that up."