You can count Cruz Pedregon as one who would have been just fine extending the 2021 season by a few more races. As it is, his strong finish to this season only has the veteran Funny Car standout even more excited to get 2022 going.
15 Dec 2021
Josh Hachat
Feature

You can count Cruz Pedregon as one who would have been just fine extending the 2021 season by a few more races. As it is, his strong finish to this season only has the veteran Funny Car standout even more excited to get 2022 going.

Pedregon was back in prime form in the second half of the season, appearing in his first true championship hunt since 2013, winning a pair of races and finishing fourth in a loaded class.

It was his best finish in eight years and a testament to how his team, led by tuner John Collins, came together on his Snap-On Tools Dodge Charger SRT Hellcat.

“I wished we could have kept going with the season,” Pedregon said. “Brainerd was really the turning point for us and where we really turned the corner. We were in the thick of every race and really consistent.

“We were back in the fight, had a good car, and kept it rolling. We’re not going to change much of anything. We’re locked and loaded and ready to hit the ground running in 2022.”

Having a full offseason with Collins and the team will be massively beneficial for Pedregon after they came over last offseason. It was a big transition for everyone, but the two-time Funny Car world champ was thrilled with how everyone meshed.

It took some time, but the results were impossible to ignore. Pedregon got his first win in three years when he knocked off Bob Tasca III in Norwalk and became a legit title contender in August. He referenced a final-round appearance in Brainerd as the turning point, but starting with the previous race in Topeka, Pedregon advanced to at least the semifinals in seven of the next nine races, winning in Las Vegas as the last event in that stretch.

That pushed him from ninth all the way to third in points, where he went to Pomona with a legit shot at a championship. It was not only a huge jolt of energy for Pedregon but a sign of what the team can continue to do in 2022.

“The team is staying together, and those are the things winning teams do,” Pedregon said. “I see potential to not only win races, but also a championship. I think we can continue to get so much better as a team with the core group coming back.

“These cars are different to drive, so I had to learn to get back up on the wheel again. It was a really good experience for me, and I like our chances. Our communication is only going to get better, and I think we stack up well with the competition.” 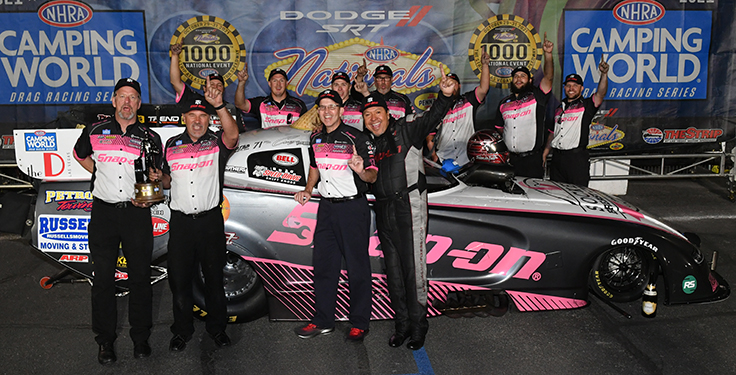 The energy has already been noticeable in the shop as Pedregon and the team have carried that late-season momentum into the offseason. The team is stockpiling parts, building a new chassis, and preparing to come out like a ball of fury in Pomona to open the year. With the opener still two months away, Pedregon is already excited and hopeful about what’s to come during what should be an extremely intriguing 2022 campaign in Funny Car.

“Their enthusiasm, you can see it throughout the team,” Pedregon said. “It’s a very welcoming situation. There’s still a lot of strong competition in the class, but I like our stability. It will be our second year with JC, and we’re not lacking anything, and there’s a lot of familiarity now with the guys. I’m excited to see how it all plays out.”