Will this be the weekend Paul Lee hoists his first Funny Car Wally?

"That's what we're open for," said Paul Lee after his round one win. "We just want to make four good runs today. Like we've been making, so, you know, we gotta give ourselves a chance to win, which means going down the track and not beating ourselves.”

When asked about the difference this type of pressure brings to his FTI Converters Dodge Charger Funny Car team, Lee said, “Well, you always want to win and some weekends go your way. Some don't. We feel like this weekend, it's going our way.” 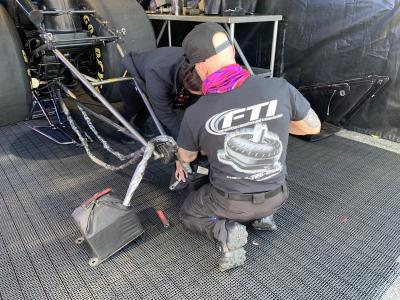 Knowing that sometimes the adrenalin rush of success is more than some new teams can take, how does that change things for his FTI Converters Funny Car team? “I've been doing this a long time. I've never really had a lot of success in the pro ranks. I did in Alcohol Funny Car, but this is the whole different league. We are maximizing our resources with all the people that are working with us. We have a great bunch of guys and that's what it takes. It takes resources and the human capital.”

To bring home a Wally at this level requires every individual on the team to have their own success. Every part they touch, everything they adjust. Which begs the question, is this team up to this new kind of challenge? Is this a different pace than they're used to?  “Oh no, no, said Lee, "These guys are all former full-time crew, most of them formerly worked with Jim Oberhofer, at Kalitta Motorsports. So they all knew the routine of how Jim O services his cars. These guys are graduates of that. They service the car just like any other full-time team. These guys do a great job and that's because of Jim O and Donnie Bender, leading these group of guys to a rhythm.”

When asked how they decided on Saturday night’s qualifying tune, Lee said, it was a cold racetrack and there’s not much data on a 65-degree track. “So Jim O put in what he thought would, you know, would work, and it did. Actually, if you look back this year, we've been doing really good on cold racetracks. We haven't done so well on the hot ones. You need a little bit of luck and that's fine, but to credit Jim O and his experience of knowing how to read these cold tracks.”

“So we were just trying to run pretty much like we did last night, you know, just get down the track, not beat ourselves. The air's better today and we'll have to get more aggressive for this next run.

To catch all the action of the 2020 Mopar Express Lane NHRA Midwest Nationals presented by Pennzoil Oct. 2-4 in person you can buy your tickets HERE, livestream all of the racing action like this on NHRA.tv, and be sure to watch the full NHRA on FOX broadcast on FS1.