It’s been 20 years since David Nickens’ name has appeared on a qualifying sheet at an NHRA national event, but the prolific Houston-based engine builder and 1991 world champion is back behind the wheel this weekend at the AAA Texas NHRA FallNationals in a car owned by Jim Whiteley.
17 Oct 2020
Phil Burgess, NHRA National Dragster Editor
Feature

It’s been 20 years since David Nickens’ name has appeared on a qualifying sheet at an NHRA national event, but the prolific Houston-based engine builder and 1991 world champion is back behind the wheel this weekend at the AAA Texas NHRA FallNationals.

Nickens, whose engines once were a staple for Division 4 Comp racers, is wheeling an all-bliack B/AA Dodge owned and built for two-time Top Alcohol Dragster and current Pro Mod driver Jim Whiteley. A lot of familiar faces are in the Nickens pit, including longtime love Karenina Sidney, brother Robert, Robert’s son Buddy, and Johnny Jones, which was Nickens’ partner when he started racing in Comp in 1978 with a Datsun 240Z.

Nickens, who was Comp’s winningest driver when he stopped racing in the class in 1992, is still the class’ second most prolific winner with 29 titles. It took almost 10 years, until mid-2001, before David Rampy surpassed him for top honors. Rampy finished his career with 81 Comp wins.

“Only 53 wins to go, David,” Jones chimed in helpfully. 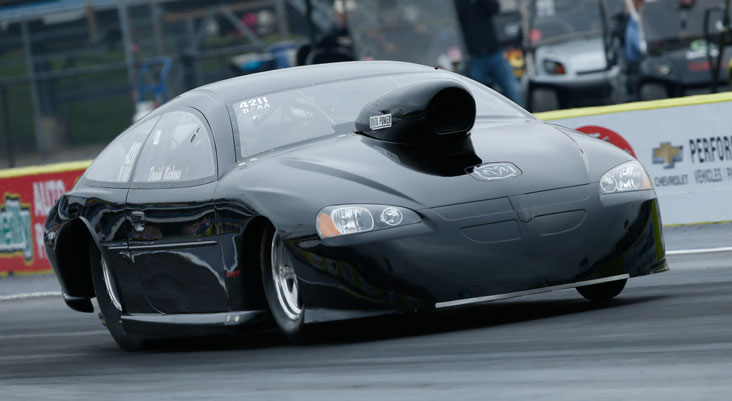 Although Nickens, who turned 70 earlier this month, hadn’t turned a tire in competition since 2000, when he raced in the Pro Stock Truck class, he’s been busy at the shop, getting into the LS-building business as well as radial-tire engines. Racing engines amount to only about 15% of his business no, but he’s never lost his love for drag racing.

Nickens will drive the car this weekend as well as next weekend at the Mopar Express Lane NHRA SpringNationals.

“Jim wants to race in Comp and asked me to put together a car for him,” said Nickens. “He told me to bring it to the track and get it lined out for him and that I could keep driving it until he was ready to drive it, then I can work on it for him if I want. He just wants us to have some fun together, He’s such a cool guy and does so much for the sport.”

New-car bugs and an unfamiliarity with the automatic transmission – almost all of Nickens’ previous cars used manually-shifted transmissions – had kept the car from reaching its potential. He even had to reach out to his son, Bo, the 1996 Comp world champ,

“I had no idea how to even do a burnout with an automatic,” he joked. “I had to call Bo and ask him. The first burnout I found myself sticking my left foot out looking for the clutch. I felt like a fish out of water.”