Torrence Racing, Don Garlits, and the story behind one of the coolest tribute cars ever

When NHRA was forced to suspend the Amalie Oil NHRA Gatornationals in March, it postponed until this weekend Torrence Racing’s Don Garlits tribute Top Fueler. In this repost from March, here's the story behind the car's design and execution.
02 Apr 2020
Phil Burgess, NHRA National Dragster Editor
Feature

There’s a long list of reasons that we were all disappointed when NHRA was forced to suspend the Mello Yello Drag Racing Series portion of the Amalie Oil NHRA Gatornationals in March, but one of them had to be not getting to see Torrence Racing’s Don Garlits tribute car on the track.

The team shared a video on social media of “Big Daddy” himself warming up the black beauty outside of the Don Garlits Museum of Drag Racing, just down the highway from Gainesville Raceway in Ocala, Fla., on Thursday of the event, but that was all we got to see until action resumed in September, and the car hit the track for the first time.

This is the story behind the car, from concept to completion.

The car, modeled after Garlits’ famed Swamp Ray 14, the first successful rear-engined Top Fueler, is the Capco Contractors team’s salute to Garlits, his ties to the Capco team through crew chief Richard Hogan, and their reverence for the quarter-mile legend. Hogan is the son of Charles “King” Hogan, who ruled Florida racing in the mid-1950s and set the bar for Garlits.

“There's a longstanding history with Hogan and ‘Big,’ so just thought it would be something really cool to honor the guy,” said Torrence. “He’s just such a legend in our sport and obviously there’s the connection between ‘Hoagie,’ who worked for Garlits for a long time, and between ‘Hoagie’s’ dad and Garlits. ‘Big’ has always been a huge supporter and fan of our team, and we’ve developed a relationship with him that not everybody gets to do.”

Torrence Racing co-crew chief Bobby Lagana Jr. said that the seeds of the plan were actually planted a year ago. 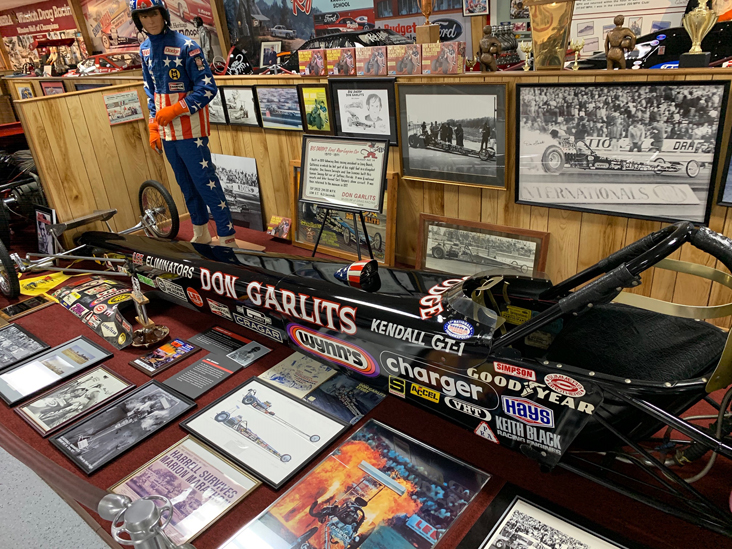 “We talk about ‘Big Daddy all the time just because of ‘Hoagie’ working with them and a lot of guys on this team really appreciate the history of how these cars have evolved,” Lagana said. “We went to the museum last year with ‘Hoagie’ and ‘Big Daddy’ gave us a behind-the-scenes tour; we were just looking at the cars they were just so cool, and we thought it would be great to do a throwback car. Everyone on the crew had an opinion on which car it should be, but ‘Hoagie’ said he wanted [Garlits’ fellow Floridian and 1980s Top Fuel rival] Darrell Gwynn to choose and Darrell said it had to be the first rear-engined car, Swamp Rat 14.

“Obviously our biggest thing was getting Steve and ‘Momma Kay’ [Torrence] to OK it and they were all good for it, but they didn’t know exactly what we were doing until it was ready. We didn’t send Steve any photos until it was done and we were loading it to go to Gainesville.”

Research then began into getting the car exactly right, from lettering to decals. Unfortunately, the car evolved constantly throughout the year and decals moved, so they decided to go with the version that resides in the museum. Garlits’ grandson, Rodney, sent them photos of the car from all angles to work with.

Lagana enlisted graphics whiz Roderick “Hot Rod” Burke, who does the design work at Torrence Racing and for many other fuel and Pro Mod teams through his Hot Rods by Burke business.

“Some of the decals he was able to pull off of a database online but because of the companies don't exist anymore, I'd say he had to actually recreate probably 30% of them by drawing them and then digitizing them to create an [Adobe Illustrator] file,” said Lagana. “We took one of our old bodies and had a local guy, Dave, paint the body for us then Rod hand-painted the name on the car and was so nervous because he loves ‘Big’ but all the letters [on the original] aren’t exactly the same size because the original guy just did it by hand.” 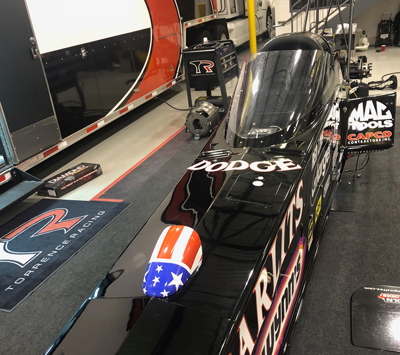 Another issue cropped up in the disparity between the wheelbase of the original -– just 215 inches -– and the current car, which measures 300 inches, requiring them to scale everything accordingly.

One of the standout pieces of detail was the addition of a cowl-mounted Dixco-style tachometer so familiar to many from that car. Garlits had that mounted where he could see it to monitor engine revs on the burnout now that the engine and tires were behind him.

“We kept saying we could make some kind of carbon piece to make it look like that tachometer but ‘Hoagie’ was 100% adamant that we had to go more than that, so we started doing some research and we found that original one on eBay. We bought it and mounted it to the body and had it wrapped with a little American flag like ‘Big Daddy’ had. It doesn’t actually work -– there are too many electronics on the car –- but it sure looks great on there.”

Because the team is based in Brownsburg, Ind., and the Torrence had their pipeline business still to run in Texas, “them Capco boys” worked by themselves and didn’t share anything with the Torrences or Hogan, who lives in Montana, as the project rolled along. 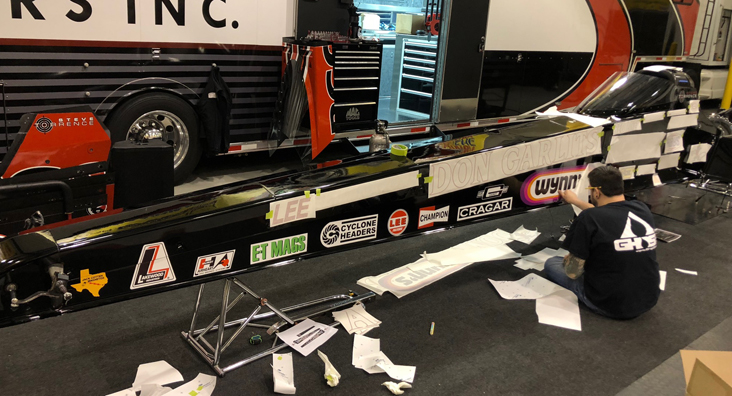 “Believe it or not, I never saw the car until they got it loaded and ready to go to Gainesville and they texted me some photos,” said Torrence. “None of the guys wanted me to see it before then; they didn't want Hogan to see it. They kept this one pretty tight-knit and tight-lipped. I still haven't seen it in person yet because I wasn’t flying into Gainesville until the day before the race so we never made it there before the race was called.”

“I thought it looked great and it was just was a good timing, especially what was going on with his brother [Ed, who was ill and passed away a few days later, on March 19]. We all just really wanted to lift his spirits.”

The unveiling and fire up

The team had already planned to do a fire-up at the Museum, which was heavily promoting that the Capco car would be there, but Garlits had no clue what was under the car cover when he rolled up. 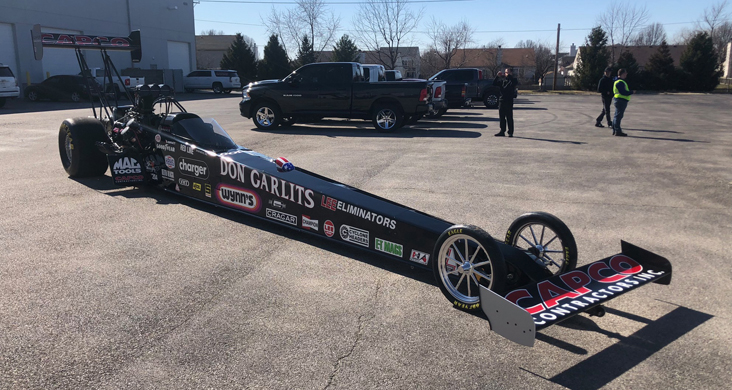 “I think ‘ Big’ was thinking because we always run a museum decal on the front of the car at Gainesville that maybe we were just gonna have a bigger decal, and not at all expecting it to be a full rendition of one of his cars. When they rolled the cover off that was the first time anybody had seen it other than our guys.” 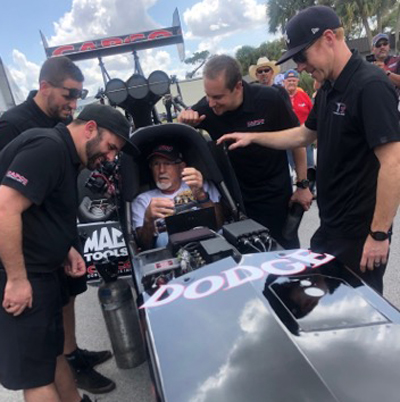 “We left Brownsburg Tuesday and got to ‘Big’s’ on Wednesday morning just as he was driving up to Gainesville to drop one of his cars off at the track,” said Lagana. “They had helped us promote it to they had a bunch of interest from customers.

“When he came back he was excited and he was telling everybody, ‘Wow those Torrence guys ran a museum sticker last year so I know what they’re up to –- they’re going to run a big museum sticker this year’; he had no idea. When we took the cover off the car in the video that's the first time he saw it .

“It was a special moment. You could see how taken back he was by it. His first words were, ‘Wow, the two-time world champ’s car has my stickers on it and it’s going to run at Gainesville.’

“We asked him to do the honors to fire it up and he said, ‘Of course. I definitely want to sit in it!’

“After the fire up, he got out and looked it over real good. He was able to piece together right away that all of the stickers were right and the placement was right, including the Jack Cotton Magnetos sticker up front. He told us that Jack is still alive and would love that his old sticker is on the world champ’s car.” 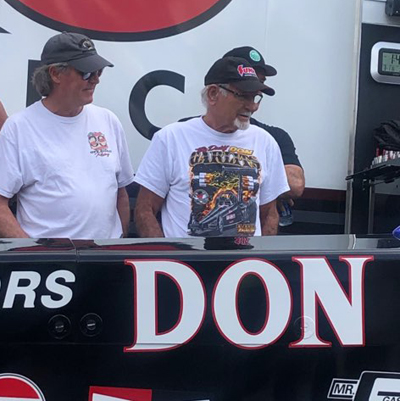 “It was just beautiful,” said Garlits. “It looked exactly like Swamp Rat 14. The layout of the decals was exactly right. The job they did on the decals like Wynn’s Charger and Lee Eliminators and the way they scaled everything was amazing. It looked so neat and took me back to the day. The tachometer on the cowl was really cool. I used to use that to monitor the engine on the burnout.  Richard Hogan and I go back a long way and it was really sweet of him to do that. It’s a shame we didn’t get to see it run.”

When racing does resume at the Gatornationals later this year, Garlits will get to see the car go down the Gainesville Raceway track like it did in 1971. In the only bow to honor team supporters, the Capco team changed the Kendall oil sticker to Red Line Oil and Simpson Safety Products to Impact!, but they will put the Kendall and Simpson back on it when they donate the body panels to the museum for eventual display next to the original.”